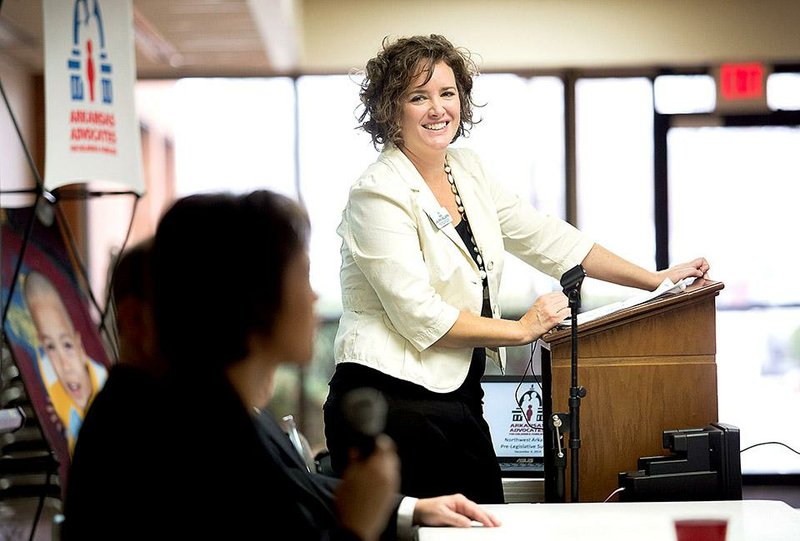 Laura Kellams with Arkansas Advocates for Children and Families listens as legislators discuss topics Thursday during a pre-legislative conference hosted by the group at the Center for Nonprofits in Rogers.

ROGERS -- Several Republican candidates ran for the Legislature this year on the promise that they'll vote against reauthorization of Arkansas' private-option health care insurance. And about a dozen of them were elected. 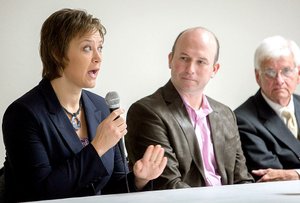 But if funding for the private option stops, it would put a huge hole in the budget of the state's new Republican governor, legislators said Thursday at a panel discussion in Rogers.

"If the private option doesn't pass again, it's going to kill Asa Hutchinson's budget," said Jana Della Rosa, a Republican who was elected last month to serve House District 90, in Benton County. "There's such a huge hole that suddenly appears.

"I don't think there's really any interest in doing that," she said. "I think once a lot of these freshmen understand that that's the true scenario ... I think some of them will come on board with it."

Della Rosa, who will be a freshman legislator in January, said people who decide to run for office often don't know all the details about complicated topics like the private option.

"There are a lot of issues that we don't know anything about," Della Rosa said. "I think there's a lot of ignorance on the part of the freshmen coming in, not stupidity, but ignorance."

The size of that budget hole would be about $100 million the first year, said state Sen. Uvalde Lindsey, D-Fayetteville, who also participated in the panel discussion.

The program extends insurance coverage to adults with incomes of up to 138 percent of the poverty level -- $16,105 for an individual or $32,913 for a family of four. The federal money pays for 100 percent of the private-option costs through Jan. 1, 2017, when the state will be required to begin paying 5 percent of program costs. The state's share will gradually increase to 10 percent in fiscal 2020.

When asked about the private option and next year's budget, J.R. Davis, a spokesman for the governor, said via email, "Regardless of what happens with the private option, one scenario is for certain: Gov.-elect Hutchinson will work with the legislature to pass a balanced budget as required by Arkansas law."

Thursday's event was presented by Arkansas Advocates for Children and Families to provide information to legislators before the 90th General Assembly convenes Jan. 12 and to hear their thoughts.

Besides Della Rosa and Lindsey, two Springdale Republicans, Sen. Jon Woods and Rep. Micah Neal, also participated in the panel discussion. The meeting drew a crowd of about 100 to the Center for Nonprofits at St. Mary's in Rogers.

Woods told the crowd that campaigning is considerably different from governing.

"When people run for office, they're new," Woods said. "They say, 'Let's cut taxes.' They say all these things, but then once you get in, you truly understand how the government's role is in society."

Woods said his views have changed considerably since he was first elected to the House in 2006. Tax cuts are good, but you still have to have the funds to govern effectively, he said.

"Tax cuts are great if we can do them strategically and somehow create jobs," Woods said.

But cutting taxes and causing programs to suffer isn't the answer, he said.

"Then you're doing something wrong," Woods said.

Lindsey said $111 million per year is budgeted for pre-kindergarten education, but the amount needs to be increased by $16 million. The program hasn't had an increase in funding since 2008, he said.