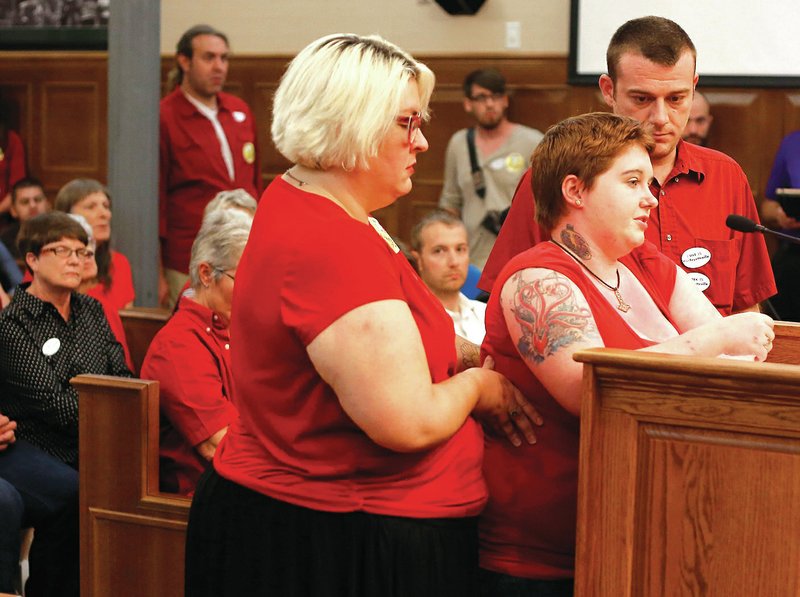 Fayetteville — By a 6-2 vote Wednesday, Fayetteville became the first city in Arkansas to enact a law prohibiting certain types of discrimination based on sexual orientation and gender identity.

See a photo gallery from the City Council meeting.

State and federal laws make it illegal to evict, fire or refuse to hire people because of their age, gender, national origin, race, religion or disability.

No such protections are in place in Arkansas and in more than 25 other states, however, for lesbian, gay, bisexual and transgender people.

The local ordinance is an attempt on the local level to give residents equal access to jobs, housing and places of "public accommodation."

"I don't think until we had this conversation that most people in the city realized that it was legal to fire someone for being gay," Petty said Wednesday. "I think it's important to close that loop."

Mayor Lioneld Jordan said he would select a municipal civil-rights administrator from existing staff within 30 days. The administrator will be responsible for receiving, investigating and, in some cases, mediating complaints of discrimination. Violations will be referred to the city prosecutor's office, and violators could face an up to $500 fine.

In addition to the LGBT community and protected classes under state and federal law, the local ordinance also bans discrimination on the basis of ethnicity, gender expression, familial status, marital status, socioeconomic background and veteran status.

Hundreds of people turned out for Tuesday's City Council meeting, which lasted nearly 10 hours. The mayor's chief of staff, Don Marr, said the meeting went about two hours longer than what he believed to be the longest Fayetteville City Council meeting ever — in 2003, when a contentious smoking ban was being discussed.

The council heard from more than 120 people — state representatives, clergymen and women and private business owners — as well as from more than a dozen gay, lesbian and transgender residents themselves.

"The idea that I could lose my home because someone finds out that I'm gay is why ... we need to push this through as quickly as possible," Nathan Southerland-Kordsmeier said. "People like me don't feel safe here. I'm living with a shadow over my head."

The debate was mostly civil Tuesday and Wednesday, although, in the early morning hours, one opponent of the ordinance had to be escorted away from the lectern by two plainclothes police officers when he exceeded the three-minute time limit the council approved midway through the meeting.

Linda Burnett was one of several people who spoke against the ordinance on strictly religious grounds.

"The most unique, intimate relationship, in my opinion, is our relationship with God," Burnett said. "I believe it is always wrong to ask somebody to violate their own conscience. To do so is to ask a human being to live without faith. I don't believe you should force anyone to countenance something that they ... have deep convictions about."

The Rev. Abigail Letsinger, a pastor at Good Shepherd Lutheran Church in Fayetteville, said her faith teaches her to be accepting of gay, lesbian, bisexual and transgender residents. "We are all God's children," Letsinger said. "And we are all equal in the eyes of God."

Terry Turpin, co-founder of Acumen Brands in Fayetteville, gave one of the most impassioned arguments against the ordinance from a business perspective. He said the ordinance could lead to frivolous complaints from employees who were fired for just cause.

"I don't want someone who has no experience in my world coming in and telling me how to run my business," Turpin said of the civil-rights administrator.

"The business owner who is concerned about the negative effects of this ordinance is not a bigot," he added.

"Employees deserve the security of knowing their employment is based on their ability to do their job and nothing else," McDonald said.

There were slightly more supporters than opponents at the meeting Tuesday night and Wednesday morning, in contrast with an Aug. 5 meeting at which the proposal drew overwhelming rebuke.

Kinion, one of the six aldermen who voted in favor of the ordinance, said he did so as a gay member of the City Council.

Tennant, one of the two aldermen to vote against the ordinance, said his no vote doesn't mean he supports discrimination. Instead, he said, he was unwilling to create a position when he didn't know who would fill it or what their qualifications would be.

"I'm being asked to trust the administration to figure this all out," Tennant said. "That is a very difficult pill for me to swallow."

There could be court challenges, for example.

Marshall Ney, a Rogers attorney, said as a representative for several credit providers, builders and landlords, he was concerned about the idea of having someone's socioeconomic background covered in the ordinance.

Stephanie Nichols, a Jonesboro-area attorney who said she was representing 12 Fayetteville churches with membership of more than 10,000 people, also challenged the ordinance, saying it violated people's personal liberty and religious freedoms.

Nichols said after the meeting Wednesday, however, "I don't have any legal challenges prepared."

The issue could also be put to a public referendum with signatures from 15 percent of the 27,296 residents who voted in the 2012 mayoral election.

In a failed amendment Tuesday, Tennant proposed putting the entire ordinance on the Nov. 4 ballot. The amendment was defeated, 6-2, with Tennant and Schoppmeyer casting the only affirmative votes.

More than 57 percent of the 13,558 Fayetteville residents who voted in a 1998 referendum opposed a so-called Human Dignity resolution, which would have added "familial status" and "sexual orientation" to the city's nondiscrimination policy for city employees.

Also on Tuesday, the City Council agreed to buy 11 acres adjacent to Gulley Park from Mary Lou Dunn for $1.1 million.