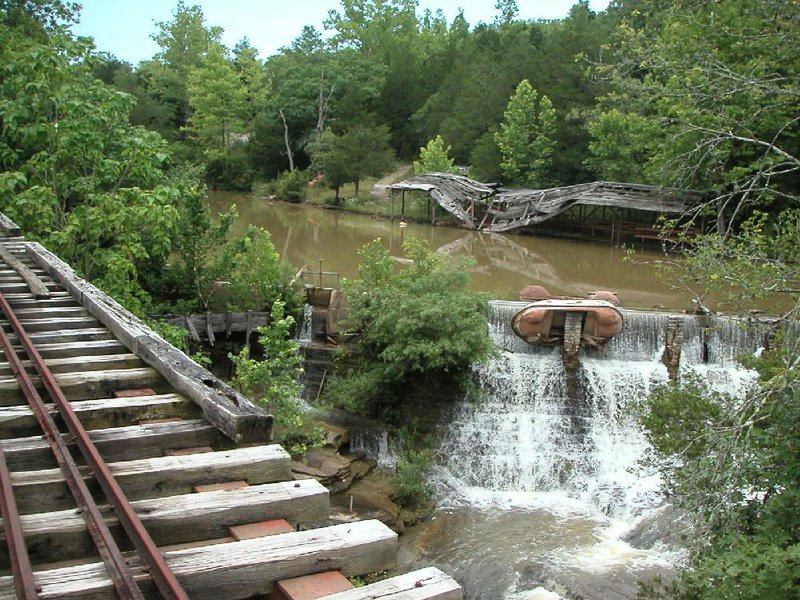 Parts of an old log ride lie in ruins at Dogpatch USA amusement park near Jasper in this 2004 photo. Charles “Bud” Pelsor, who recently bought much of the land around the park, said he plans to clean up Mill Creek and restock it with trout and mussels.

What is left of the former Dogpatch theme park in Newton County was sold Wednesday for about $2 million to the inventor of a "spill-proof" dog bowl and his partners. 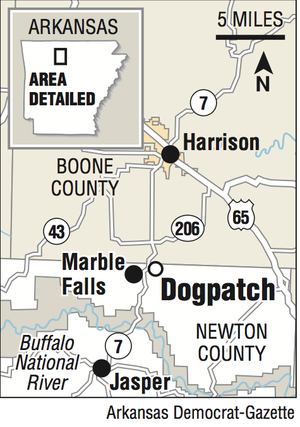 A map showing the location of Dogpatch, Arkansas.

Charles "Bud" Pelsor said he wants to turn the 400-acre site into an ecotourism "village" complete with artisans, a restaurant, and a creek stocked with trout and freshwater pearl mussels.

Dogpatch USA was a theme park from 1968 to 1993 based on Al Capp's "Li'l Abner" comic strip, which was published in more than 700 newspapers across the country.

At its zenith, Dogpatch and Marble Falls, a neighboring park with a ski resort, encompassed about 863 acres, said Pelsor. But parts of the park had been sold earlier, he said.

"We did not get everything," said Pelsor. "It looked like it was butchered up and piecemealed out a few years ago."

According to a warranty deed filed Wednesday with the Newton County circuit clerk, the buyer of the remaining property was Great American Spillproof Products Inc., which is Pelsor's company. The purchase includes the main part of the old theme park and about 25 buildings.

Pelsor said his partners are James and Susan Robertson of Newbury Park, Calif. James Robertson is the chief financial officer of Great American Spillproof Products, according to incorporation papers filed Monday with the Arkansas secretary of state's office.

Pelsor is from Indiana, but he has family roots in the Pope County town of Pelsor.

He said he is moving to Marble Falls, where he'll be living in a former ski lodge that he also plans to purchase.

Pelsor said he went to Dogpatch when he was a child, around 1970.

"I saw Dogpatch open in its heyday," he said. "I saw how the local residents thrived from it. ... All the houses along the road had jellies, jams, quilts for sale. I was really impressed with it. I kept making trips down here, and it just kept getting worse and worse and worse."

Pelsor said he wants to revive the park but not as a theme park like Dogpatch.

"Resurrecting the dead is something best left for someone other than me," he said.

There may be a Dogpatch museum on site, but the details are still being worked out, he said.

"Our plan is a bit dynamic, and it's going to change as it goes along," he said. "We are going to do green development, ecotourism."

In keeping with the ecotourism idea, Pelsor said he plans to recommission a trout farm and a mill on the property and clean up Mill Creek so he can re-establish Arkansas' pearl-bearing Margaritifera mussels.

"The trout and the mussels go hand in hand with each other because they need the symbiotic relationship," he said. "So we'll be restocking Margaritifera mussels in Mill Creek."

Pelsor said he doesn't know if there are still any of the mussels left in the creek. Pearl hunters and irresponsible agricultural practices have pushed the mussels out of creeks and onto endangered lists, he said.

Marty Matlock, director of the office of sustainability at the University of Arkansas at Fayetteville, said culturing the mussel in captivity is probably the only way it will survive.

"The genus of freshwater mussel Margaritifera is broadly distributed across the U.S. and Arkansas," said Matlock, who is also a professor of biological and agricultural engineering at the university. "Most are threatened or endangered due to water pollution from sediment and habitat loss. Some species of freshwater mussels can no longer be found in Arkansas due to habitat loss and sedimentation from human activities," both agricultural and urban.

Pelsor said he plans to begin immediately clearing underbrush from the property.

"Of course, this is a long-term project," he said. "It will take a while for the mussels to grow big enough to harvest."

People who visit the park will be able to buy mussels there, he said.

Pelsor also said he'll try to save all the buildings he can on the property. "We'll be repairing and rebuilding a lot of buildings," he said.

Pelsor said he moved his business to Arkansas two weeks ago. Manufacturing of the three sizes of pet bowls made by his company will be done in Mountain Home beginning next week. Previously, the products were made in Louisville, Ky.

In time, Pelsor said he plans to buy equipment and move the manufacturing operation to Marble Falls, he said.

According to the website for Pelsor's company, greatamericanspillproof.com, its product is called the Buddy Bowl.

In a photo on the website, Pelsor can be seen holding a full-grown wolf-dog hybrid named Miss Arkansas Diamond. She is the "spokes animal" for the Buddy Bowl, according to the website. "Dia," for short, was acquired during a 2008 trip to Arkansas.

According to the website, the spill-proof design that began with dog bowls will be incorporated into other products such as flower vases, soft-drink cups and ice cream containers.

"I own the patent on spill-proof technology," he said. "I will be implementing other venues of spill-proof once we start manufacturing."

The sellers of the property were Stewart Nance, Pruett Nance and Brent Baber.

The Nances acquired the property in 2011 in lieu of a $764,582 court judgment against the previous owners, brothers C.L. and Ford Carr of Missouri and Michael Carr, a caretaker of the property.

The Nances sued the Carrs after Pruett Nance was severely injured in 2005 while riding an all-terrain vehicle on a road through the abandoned park. Pruett Nance's trachea was severed and his neck was broken after he rode the ATV into a booby trap-style cable strung between two trees.

Stewart Nance is Pruett's father. Baber is a Little Rock attorney who represented the Nances.

Immediately after the judgment, Stewart Nance said that the family had no plans to develop the property and would seek to sell it.