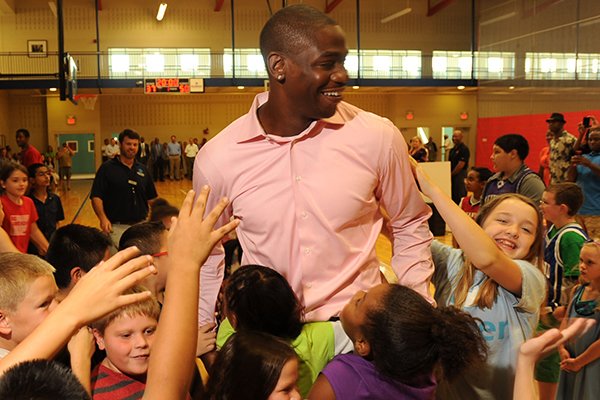 Brewer, a Fayetteville native who utilized the club growing up, said the donation on behalf of the Ronnie Brewer Foundation was the first in a series of installments meant to fund a new basketball facility for the Boys & Girls Club. The gymnasium will be named for the 28-year-old Brewer.

"I try to represent Fayetteville all the time to the best of my ability," Brewer said. "We want to help out as much as we can and give back to the kids of Fayetteville."

The gymnasium will be built behind the Boys & Girls Club, located on Rupple Road, and will be similar to the size of a basketball arena already on site. Brewer said the purpose of a new facility is to meet the club's growing demand for space.

Hundreds of kids utilize the club for after school programs. New Heights Church uses the building each Sunday.

"The population is growing," Brewer said. "You can see how many are already coming. For them to have enough space, they need a bigger facility."

Becky Brink, the director of development for the club, said she hopes to have ground broken on the new gymnasium within the next 12 months.

Brewer is entering his eighth season in the NBA and signed a two-year contract last month with the Houston Rockets. In his seven seasons as a professional, Brewer has averaged 8.2 points and 3 rebounds per game while playing with the Jazz, Bulls, Knicks and Thunder.