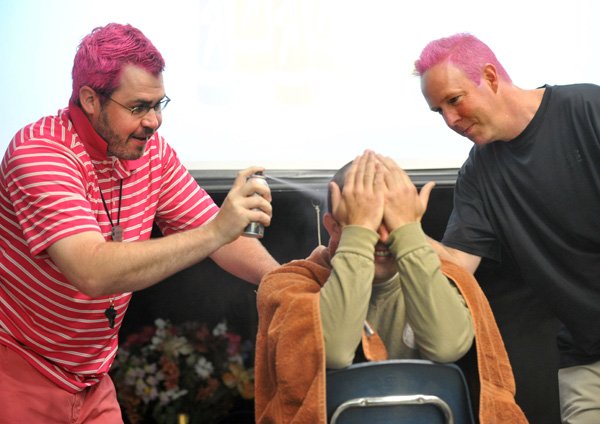 Holt Middle School teacher Brandon Craft (left) and assistant principal Rich Guthrie (right) spray pink hair dye onto the head of their fellow teacher Blaine Sanders Wednesday morning during a morning assembly in Fayetteville. The teachers dyed their hair in an effort to help motivate their students who closed out a year of studying community giving/service. The students efforts resulted in $1,500 being raised to donate to Oliviaâ€™s Basket.

FAYETTEVILLE — Bekah Smith, a seventh-grader at Holt Middle School, fondly remembers the tea parties she used to have with her friend, Olivia Ray.

Bekah and her classmates in the third-period Learning Tools Class remembered Olivia with a $1,400 donation to Olivia’s Basket, a nonprofit organization started by her family to honor Olivia’s short life. She died in 2009 from injuries when struck by a car as she was crossing Razorback Road near the Randal Tyson Track Center.

The mission of Olivia’s Basket is to build homes in developing countries. The donation will go a long way to help build a house this summer, said Jane Ray, Olivia’s mother.

“I’m honored,” she said with tears welling up in her eyes before being presented with the oversized check during an early assembly at the school. Other members of the Ray family joined her on stage.

Olivia was 10 years old and in the fourth grade at Leverett Elementary School when she died. She would be in the seventh grade at Holt this year if she were still alive.

Bekah said she and Olivia used to have great tea parties when they drank raspberry tea, ate strawberries and plain sugar.

“She had a beautiful smile. She was a very sweet girl who was always smiling and wanting to help other people,” Bekah said of her friend. “She made their day.”

“She always had that big smile on her face,” Alex said.

The money was raised by collecting donations at school, said Michaela Hedges said. Students received a carpenter’s pencil when they donated. The project was done by the students under the guidance of their teacher, Amy Eversole.

The donation was the result of a yearlong study by seventh-graders which started last fall with a charity fair. Each of the groups of seventh-grade students selected a charity and were required to develop an action plan to raise money for that charity.

Penny Ezell, instructional facilitator at Holt, said at the start of the project the the charity fair was intended to be a springboard to help students better understand how they can give back to their community. The project was developed as part of the new Common Core curriculum which focuses on making learning more rigorous and relevant to students everyday lives.

Principal Mike Mason said the students learned much from the project.

“They learned not only presentation skills but they also learned heart,” he said.