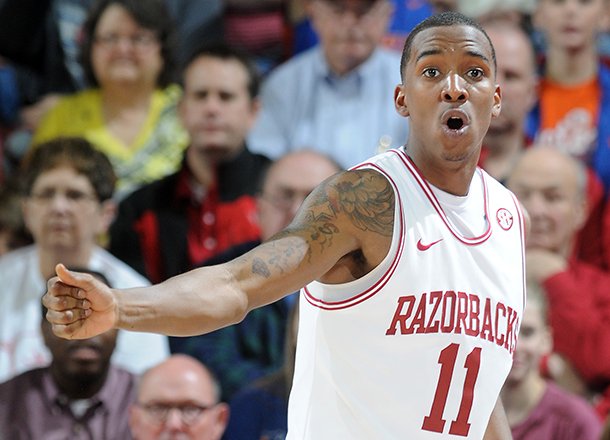 BJ Young reacts during the second half of Arkansas' win over Florida on Feb. 5.

FAYETTEVILLE — Arkansas guard BJ Young said Thursday he will enter the 2013 NBA Draft, forgoing his final two years of eligibility with the Razorbacks.

Young led Arkansas with 15.2 points per game and 104 assists as a sophomore, and was voted second-team all-Southeastern Conference. He joins forward Marshawn Powell as players to declare for the draft this off-season.

“This is his dream and as a coach I encourage him to pursue that dream," Arkansas coach Mike Anderson said in a statement. "I gave him the pros and cons of his decision and he chose to enter the draft. BJ has become a well-rounded player, leading us in scoring and assists and he became a more active rebounder.”

How UA underclassmen have fared in NBA Draft

After earning all-SEC freshman honors last season, Young entered his name in the 2012 draft, but didn't hire an agent and opted to return to school. Per NCAA rules, players cannot withdraw their name from the draft twice.

Young wrote Thursday on Twitter, "Thank you Arkansas for everything. I have unconditional love for this place and people here."

Powell, who averaged 14.5 points per game, declared for the draft earlier this week. He and Young were the only players to average double-figure scoring last season for the Razorbacks (19-13).

If Powell remains in the draft, forward Coty Clarke will be Arkansas' leading returning scorer (7.6 points per game) and rebounder (5.2 per game). The Razorbacks will also add guard Alandise Harris to the roster next season. Harris, a Little Rock native, redshirted last season after transferring from Houston where he led the Cougars with 13.3 points per game as a sophomore.

Underclassmen who haven't hired an agent can return to school if they withdraw their name from the draft by the April 16 deadline, though it isn't believed Powell will return.

The losses of Young and Powell would open two scholarships for Arkansas to use in the spring signing period next month. The Razorbacks had one of the top signing classes in the fall, inking a pair of forwards, including McDonalds All-American Bobby Portis of Little Rock Hall.