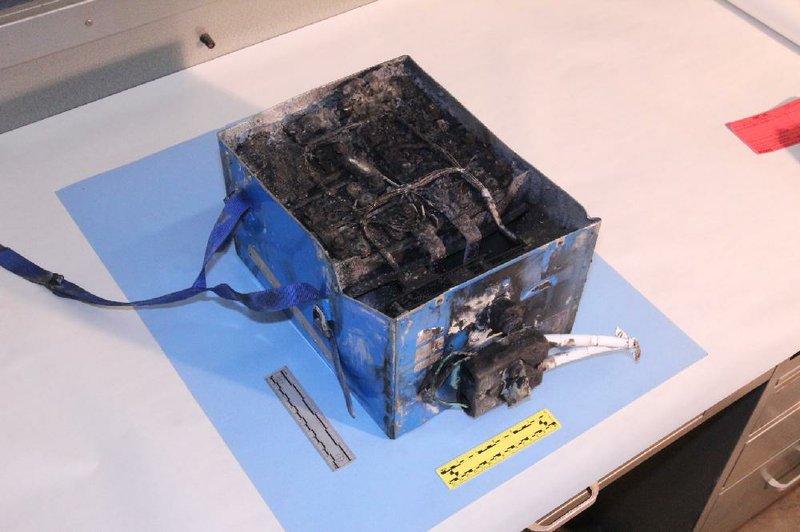 The National Transportation Safety Board displays the burned auxiliary power unit battery from a Japan Air Lines Boeing 787 in this undated photo. The battery caught ÿre while the plane was parked at Boston’s Logan International Airport on Jan. 7.

TOKYO — The troubles with Boeing’s 787 Dreamliner are putting a spotlight on the Japanese maker of the lithium-ion batteries that are the focus of investigations into onboard fire risks.

Kyoto, Japan-based GS Yuasa Corp. said it began working Thursday with investigators to determine the cause of recent problems with the 787. An overheated and leaking battery prompted an All Nippon Airways jet to make an emergency landing on Wednesday, leading regulators in Japan, the U.S., India and Europe to ground the planes.

Safety experts say the leakage of electrolyte from the All Nippon Airways jet was cause for serious alarm because the corrosive fluid can damage electrical wiring, components and even support structures for the plane’s composite body.

“The cause of the problems is unclear,” said Yasushi Yamamoto, a spokesman for GS Yuasa. “We still don’t know if the problem is with the battery, the power source or the electronics systems,” he said.

The 787 relies far more than older aircraft on electrical systems, and troubles with the batteries could pose a challenge to GS Yuasa’s aerospace aspirations. Apart from the 787, the company has a contract to supply lithium-ion batteries to the International Space Station.

The Dreamliner is the first airliner to make extensive use of lithium-ion batteries to help power its main electrical systems. The batteries were chosen for their quick charging times and capacity to fit into space-saving shapes, facilitating the use of energy-efficient, lightweight composite materials for the plane’s body instead of aluminum.

But like other lithium-ion batteries, they pose risks. Such batteries are used in countless electronic devices, and overheating that had the potential to cause fires resulted in laptop recalls in recent years.

Japanese manufacturers such as GS Yuasa, Mitsubishi Heavy Industries and other powerhouses provide about 35 percent of the Boeing 787’s parts, and the project has sped the growth of an aerospace production industry centered on the city of Nagoya. Building up such high-tech industries is a pillar of government policies aimed at restoring Japan’s export competitiveness and revitalizing an economy in recession.

Lithium-ion batteries account for a small but growing part of total sales for GS Yuasa, a company first founded in 1895 that, according to data company Toyo Keizai Inc., is the world’s third-biggest battery maker.

But like many other Japanese manufacturers, Yuasa is carving a niche for itself in advanced technology.

Just over a year ago, it began construction in Ritto, Japan, of a factory that will eventually have the world’s biggest capacity for production of lithium-ion batteries.

Early on, regulators acknowledged concerns over fire and overheating hazards from lithium-ion batteries, issuing special precautions for installing them to minimize risks.

GS Yuasa’s Yamamoto said he was unsure how long the investigation into the problems with the 787 would take. Each day will likely hurt. The company’s share price sank another 5 percent Thursday and is approaching a 52-week low.