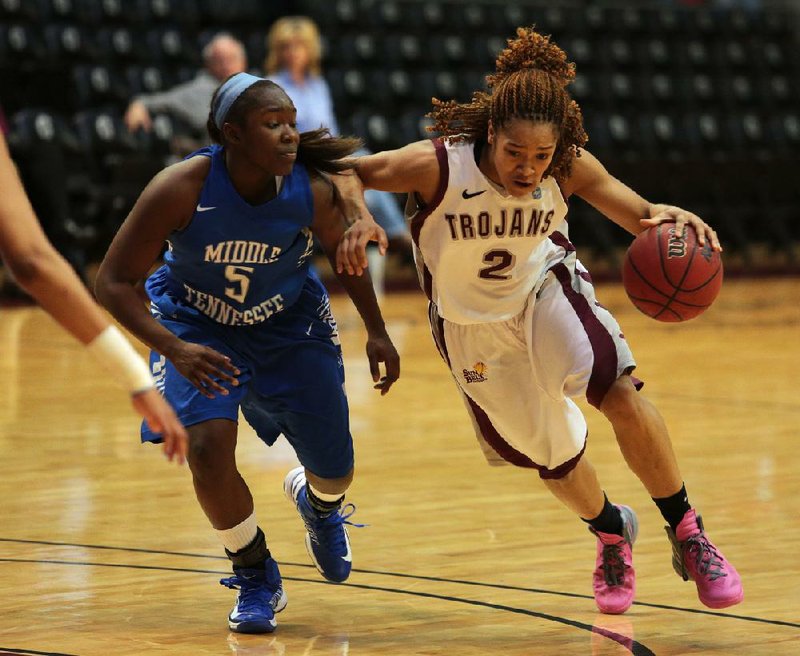 Winning six in a row was nice, but a seventh consecutive victory, over the Sun Belt Conference’s overall leader, was what the Trojans really needed.

The Trojans still trail Arkansas State, which won at Louisiana-Monroe on Saturday, by a half-game in the Sun Belt West Division standings.

“It shows how much, defensively, we’re growing up, knowing what we want to take away,” UALR Coach Joe Foley said. “Offensively, we’ve got a long way to go.”

That was especially evident at the start. The Trojans committed four turnovers in the first four minutes and fell into a 12-point hole less than 10 minutes into the game.

But a short run at the end of the first half, and eight consecutive points early in the second, got the Trojans on even terms before they slowly pulled away.

The victory was the seventh in succession for UALR since Foley shifted the team’s focus to defense for a Jan. 23 victory over Florida Atlantic. Heading into that game, the Trojans had lost four consecutive games and 6 of 7.

Foley’s team continued its strong defensive play Saturday, holding Middle Tennessee to 29.6 percent shooting in the second half and a season-low point total.

Along the way, the Trojans held all-conference forward Ebony Rowe to 14 points on 6-of-12 shooting.

Rowe, who had 35 points and 17 rebounds in Middle Tennessee’s 65-56 home victory over UALR on Jan. 16, didn’t score over the final seven minutes.

“You better try to stop Rowe inside,” Foley said. “If she gets up to 25, 35 points, their team gets rolling pretty good.”

Five of UALR’s first six possessions ended without points and after Rowe scored inside with 10:29 left, the Blue Raiders’ lead was 17-6.

But Morgan Bolton made a three-pointer at 9:26, and Ford later made two free throws as UALR outscored Middle Tennessee 10-2 to trail 22-17at halftime.

Ford’s layup off a steal gave the Trojans a 33-32 lead with 10:25 left, and the teams traded the lead seven times over the next four minutes.

But the Trojans, sparked by Carolee Dillard’s jumper with 6:30 left, outscored the Blue Raiders 9-0 to take a 45-38 lead.

UALR scored 17 points off 18 Middle Tennessee turnovers, 13 coming in the second half.

“Defense turns into offense,” said Kiera Clark, who had 10 points and six rebounds.

And as Foley said, the offense still has a ways to go.

Olvera and O’Bannon combined to score 26 of ASU’s 40 points in the second half.

ASU trailed by nine points in the first half after Louisiana-Monroe hit 10 of its first 15 shots.

Morrill hit the first of two three-pointers in the first half with 11:30 to go in the half to pull the Red Wolves’ within 20-14.

Lakendra Marsh’s jumper extended the Lady Lions’ lead to 58-53 with 3:05 remaining, but Texas Southern outscored UAPB 10-1 to earn the victory.