Outdoor Play Has Positive Effect On Physical And Psychological Health by Erin Spandorf | December 30, 2013 at 5:00 a.m. 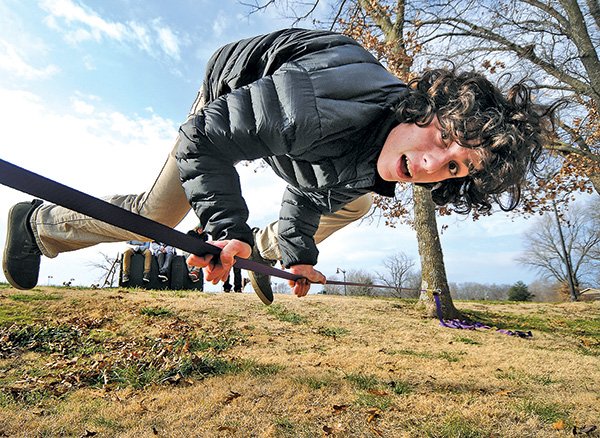 STAFF PHOTO BEN GOFF Zane Signorino, 18, balances on his hands Wednesday while trying out the new slack line kit he got for Christmas at Memorial Park in Bentonville.

Annie Been, Springdale resident and mother of two, said she remembers growing up on the outskirts of town, where she played outside, swinging on vines.

“We live in a different time,” she said. “Kids can’t really do that.”

Less time playing outside can decrease life span, said Roberta Glinkoff, professor of education at the University of Delaware. Glinkoff specializes in play and child development. Children need to play outside to build muscles and develop balance and hand-eye coordination, she said, and not all outdoor activities can be done indoors.

Note: Some outdoor activities may require parent supervision depending on the activity and the child’s age.

Play on a playground

Play in a tree house or playhouse

Draw on the sidewalk with chalk

In Arkansas, 14.2 percent of 2- to 4-year-old children from low-income families were obese in 2011, while 20 percent of 10- to 17-year-olds were obese, according to the F as in Fat website. F as in Fat is a project under the Trust for America’s Health, a nonprofit organization focused on health and disease prevention.

Spending time in nature can help decrease these health risks, said Rich Dolesh, vice president of conservation and parks for the National Recreation and Parks Association. Encouraging children to play outside is a better option than taking them to a gym to get exercise, Dolesh said.

“You can prescribe nature for kids,” he said. “Their health will improve.”

Been walked next to Ariana Been, her 5-year-old daughter, while she rode her bike Thursday at Murphy Park in Springdale. Been said they were spending some time outdoors, instead of playing with the video games her children got for Christmas.

Ariana said she would rather play outside than inside, and her favorite thing to do outside is play in the snow. She likes to build snowmen and make snow angels.

Playing outdoors also can have a psychological effect, Glinkoff said. It can help decrease symptoms of attention deficit hyperactivity disorder and increase feelings of well-being. She compared the happiness of children playing outside to how people feel after running because of the release of chemicals in the brain.

The decrease in outdoor play is largely because of an increase in the time children spend in front of electronics, Dolesh said. The average child spends about eight hours a day using electronic entertainment, like tablets, cellphones, computers, video games and television.

“Kids can recognize hundreds of corporate trademarks, yet they can’t go in their backyard and name the wildlife,” Dolesh said.

Another cause of more children playing inside, is parents who prohibit their children from doing so, Dolesh said. He thinks this is because reports, such as child abductions, have been blown out of proportion by the media. These reports about “stranger danger” scare parents into keeping their children indoors.

In turn, this can scare children into thinking it’s not safe to play outside, Dolesh said. When those children grow up and become parents themselves, they will be less likely to allow their children to play outside because of how they were raised.

“Parents need to have the understanding that they’re part of the solution,” Dolesh said.

Jewel Adamson, 10, was at Murphy Park on Thursday with Patricia Pearson, her aunt. Jewel said her parents’ top rule at home is to stay in the yard so her parents can see her.

Parents can increase the amount of time their children spend outside by going on nature walks with them, taking them to events at parks and organizing outdoor family activities, Dolesh said. He said he used to take groups of children on nature walks and found they enjoyed outdoors adventures.

“Nature is inherently fascinating to kids,” he said.

There are more than 48 parks in the four large cities in Northwest Arkansas.

Jewel said she would rather play outside than inside because she has more activities to choose.

“Inside you can just watch TV or play with your dolls,” she said.

Josh Hart owns Natural State Treehouses, a custom tree house and play structure company based in Fayetteville. His customers tell him their children are more interested in playing outside when they have a structure to use. It also teaches children to use their imaginations, he said.

“It’s just another way to get them out there,” he said.

Playing outside helps children learn independence, confidence and judgment, Glinkoff said. The amount of freedom a parent gives their child should depend on what’s age appropriate.

“You have to loosen the apron strings on the kid,” she said. “You’ve got to prepare your kid for the world.”