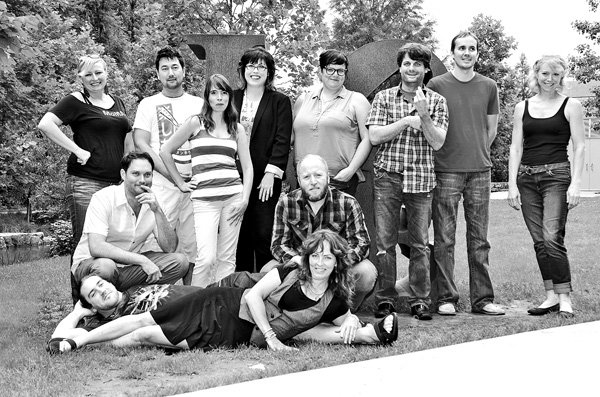 Some of the participants in the Sensory Iconoclasts exhibit include Houston Hughes and KJ Zumwalt, front from left, Jerrmy Gawthrop and Bryan Hembree, middle from left, and Kat Wilson, back from left, Darwin Beyer, Eve Smith, Tammy Varney, Emily Lawson, Case Dighero, Matt McClure and Paula Jo Chitty Henry. The group gathered for a meeting Sunday at Crystal Bridges Museum of American Art in Bentonville.

In May, Eve Smith, director of visual arts at the Arts Center of the Ozarks in Springdale, set in motion a whole new kind of partnership within the arts.

The idea was born when Smith and Case Dighero, culinary director for Crystal Bridges Museum of American Art, teamed up to create food and a painting in support of ACO’s annual 5x5 Soiree.

Now Smith and Dighero are co-curators of a series of events that challenge artists and chefs to inspire each other. The culinary portion of the pairing will be offered at various times this month at participating restaurants. An exhibition of the art - from paintings to poetry - follows Sept. 9 through Oct. 4 at the Arts Center of the Ozarks, with a reception set for 6-8 p.m. Sept. 12.

On Sunday, the artists and the chefs got together at Crystal Bridges to report on their progress: CASE DIGHERO Chef at Eleven and director of culinary

WHEN & WHERE - Eleven Ways to Eat a Tomato is available on the dinner menu at Eleven.

EVE SMITH Oil painter and director of visual arts at the

Arts Center of the Ozarks PARTNER - Case Dighero ART - Two watercolor paintings (figurative) built with tension between our sexuality with pleasure of food and our bodies.

WHEN & WHERE - Smith’s art will be on show during the“Sensory Iconoclasts” exhibit at ACO.

KJ ZUMWALT Chef at Caribe in Eureka Springs PARTNER - Houston Hughes FOOD - Caribbean/island inspired dishes; spicy salsa, creamy shrimp, fajitas, lots of vegetarian/farmers market inspired INTERSECTION - The fi rst dish is what I believe Houston would like to eat, and the second one is inspired by“breaking” out of the mold.

WHEN & WHERE - Available from noon to 9 p.m. Thursday through Sunday through September at Caribe

INTERSECTION - I was less

influenced by KJ’s food than

her personal life and story of

how she became a chef. She

loved the person who taught

her to cook and then lost her;

it’s a story worth telling.

will be performed for the fi rst

Caribe. A video will later be

made available online and as

part of the exhibit at the ArtsCenter of the Ozarks.

Chef at Greenhouse Grille in Fayetteville PARTNER - Bryan Hembree of 3 Penny Acre FOOD - Indigenous Arkansas foods, created in traditional Native American style with modern-day gourmet approach INTERSECTION - Original roots - the food is a song about this lifestyle and time WHEN & WHERE - Available at Greenhouse Grille on the weekend specials menu (Aug.

BRYAN HEMBREE Artist in 3 Penny Acre PARTNER - Jerrmy Gawthrop ART - I write primarily story- or character-based songs in a folk or traditional style. I am specifi cally interested in historical songs, songs that say something and/or shed light on an undertold story.

INTERSECTION - Both the food and lyrical content are focused on pre-Arkansas foodways and life of native peoples.

WHEN & WHERE - The song will be released at the September event at the Arts Center of the Ozarks.

EMILY LAWSON Chef at the Depot PARTNER - Kat Wilson FOOD - Food for this project is inspired by the viewing of the process that food is created.

Artist who does installation, photography, video and performance art PARTNER - Emily Lawson ART - Habitats: photos of people and their stuff.

INTERSECTION - We were just asked to be in this, so we are very early in the project. As of now, we are bouncing ideas off each other - fighting (in a good way).

PAULA JO CHITTY HENRY Chef at Crêpes Paulette in Bentonville PARTNER - Sara Segerlin FOOD - We’ll be offering the crepe la “meli-melo,” which in French means “hodgepodge” or “mishmash.” It will be a quirky (but delicious) sensory mash-up with fresh strawberries and mint, feta cheese, nuts and a balsamic vinegar reduction on a sweet crepe.

INTERSECTION - My recipe for this unusual crêpe was inspired by Sara’s desire to capture what is whimsical and unique about Crepes Paulette and to play off a “circle” imagery, which fi gures prominently in our concept. The “circles” we make on the griddle with our crepes can encompass and symbolize many things, and I liked the idea of bringing together many disparate and uncommon flavors to offer something very different for us and our customers, yet still trueto what we do.

multidiscilpinary art/video art PARTNER - Paula Jo Chitty Henry ART - My art projects are intended to open up the human’s exploration of time and space with a playful spirit.

You’ve got the combination of Fred’s French cultural touch as a thick-accented host and Paula’s playful and creative cooking personality that is lovingly put into the succulent crepes,along with the circular process of preparing their fi ne crepes, lends itself to becoming a short film that captures the quirky, juxtaposition of this unique place happening in Bentonville.

WHEN & WHERE - The fi lm will be screened ongoing at the “Sensory Iconoclasts” exhibit in September and will later be included on crepespaulette.com.

PAIRED UP - Other pairs participating are chef Matt McClure of 21c Museum Hotel in Bentonville and sculptor Serkan Ozkaya; executive chef Bill Lyle of Ella’s Restaurant at the Inn at Carnall Hall in Fayetteville and textile and 3-D artist Autumn Brown;

chef David Lewis at BHK on the Square in Fayetteville and sculptor Mike Davis; and pastry chef Tammy Varney of Meridienne in Bentonville and designer Garrett Hunt.