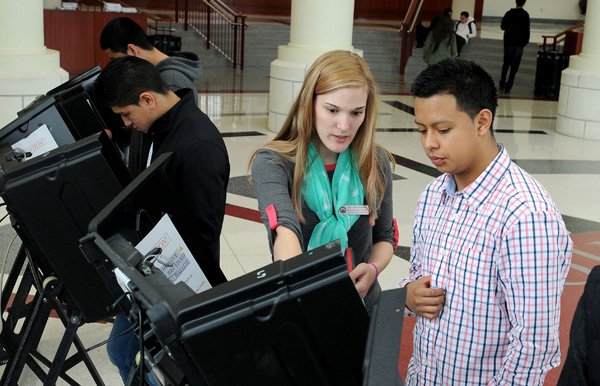 Laura Shepard-Johnson, field technician withe the Washington County Election Commission sets Springdale High School Carlos Arellano, 16, Thursday, April 11, 2013 with an electronic voting machine at the school in Springdale. The comission partenered with the school to show the students what a modern election is like by providing the electronic voting machines, requiring voter registration before election and having students only voted for the grade level.

Arkansas’ voter identification law passed after a bitter debate on whether it will discourage voting by minorities and the elderly. The group most likely to run into problems, though, are people of any background who have changed address, election officials said.

“The chances that the address on your driver’s license won’t match the address on your voter registration, which won’t match where you actually live now are pretty high,” Burrow said. “I strongly advise people to take advantage of early voting. That way, we can fix any problems while you’re right there in the county courthouse.”

The voter identification law passed in the last legislative session and takes effect Jan. 1. The state Board of Election Commissioners will decide Aug. 21 on what identification Arkansas voters will have to present. The proposed regulations were the subject of a July 17 public hearing in Little Rock. Washington County is one of three in the state that submitted written comments to the board after the hearing.

Supporters of voter ID call it a simple precaution against fraud. Yet lawmakers had to override a governor’s veto for Act 595 of 2013 to become law.

“I cannot approve such an unnecessary measure that would negatively impact one of our most precious rights as citizens.”

Opposition to the law remains. Maria Hicks is chairwoman of the 3rd District Hispanic Caucus for the Democratic Party of Arkansas. She said Northwest Arkansas is home to a mix of voters who include Hispanics, Marshallese and blacks, along with many people who moved here from other states and from other areas within Arkansas. Problems with voter ID are likely in the region, she said.

The state will decide what constitutes a valid voter identification this month. Proposed rules exempt nursing home residents, whose votes would be accepted if the administrator of the home they are in files the proper documents. The nature of those documents is still under discussion.

• An Arkansas driver’s license, either current or expired for less than four years

• An employer-issued identification badge or document

• If none of these documents apply but the voter is known to be a valid voter by the county clerk, the clerk may issue a voter ID on her authority

Benton County’s population of white Latinos plus non-whites has reached more than 24 percent, according to the 2010 U.S. Census. Residents who are 65 or older stands at more than 12 percent. The same figures for Washington County are 27 and 10 percent.

Democrats and other interested parties will prepare to help voters obtain identification, but must see the adopted rules before making specific plans, Hicks said. Hicks worked on the re-election campaign of President Barack Obama, she said. That campaign had to deal with verification problems with voter ID in other states on a regular basis.

“What do you do when getting an ID requires you to show a birth certificate — and you were born at home, as many older voters were?” she said. “The paperwork and driving time it took cost between $75 and $200.”

Hicks predicted a court challenge to the law. Who takes the law to court will depend on the final set of regulations, she said.

“You have to have standing to file a lawsuit, and we won’t know who has standing until we see the rules,” she said.

Mike Sevak of Bentonville is a former Benton County Election Commission chairman and the current 1st vice president of the Republican Party of Arkansas, the closest Republican equivalent to Hicks. He dismissed concerns about voter identification noting that simple transactions such as large credit card purchases and obtaining a bank loan require identification, and that other states have implemented these laws successfully and smoothly.

The state is aware of critics’ concerns, but must implement the law, said Tim Humphries. Humphries is staff attorney for the Board of Election Commissioners.

“Other states have done this,” Humphries said. “In Kansas, there was a problem with identification with 0.06 percent of the votes cast — 700 voters in the whole state — the first time they did this.

“Most people carry a driver’s license, after all,” Humphries said.

There are no figures on how many people decided not to vote over identification issues, however, Humphries said.

“I can tell you, though, that the first election after Indiana did this was a record turnout,” he said.

Valid forms of voter ID under the proposed rules include: an Arkansas driver’s license, either current or expired for less than four years; a state concealed handgun carry license; a U.S. passport; or a student identification card issued by an Arkansas college or university.

If none of these documents apply, but the voter is known to be a valid voter by the county clerk, the clerk may issue a voter ID. Those IDs would be held to the same standards of truth and accuracy as other election documents, Humphries said. Election fraud statutes already in place would cover the issuing of false IDs, he said.

The Arkansas chapter of the AARP said it is still opposed to voter ID in principle but was glad nursing home residents were getting special note, the group that represents older citizens said it its written comments to the board. However, those written remarks also said the special procedures for those residents, as proposed, were too inflexible and put too much responsibility on each nursing home administrator to make sure all the proper paperwork was filed. The AARP suggested that portion of the proposed rules be changed to make sure no residents of a home were left unable to vote because of a paperwork error or missed deadline.

The AARP also reiterated in its comments its objection to the law in principle, saying older voters in particular have more difficulty in obtaining the type of documents voter ID requires.

The needs of older voters, including those not in nursing homes, are being taken into account in the rule-making process, Humphries said. Allowance for such cases was also made in the law, he said. The state law, for instance, includes a public assistance identity card such as a card issued by Medicaid as proof of identity.

Washington County’s written suggestion on voter ID to the state board was to allow voters to use a state-required proof-of-insurance card as a second form of identification. Second forms of identification such as utility bills or bank statements, are required to get an absentee ballot or for all first-time voters. State-required proof of insurance is something most people carry in their glove compartments, Burrow said.

“It would be much easier to take care of something that you can just run out to your car and get at the start of the voting process rather than cast a provisional ballot and not have it counted until you can bring proof back to the clerk’s office by a tight deadline.”