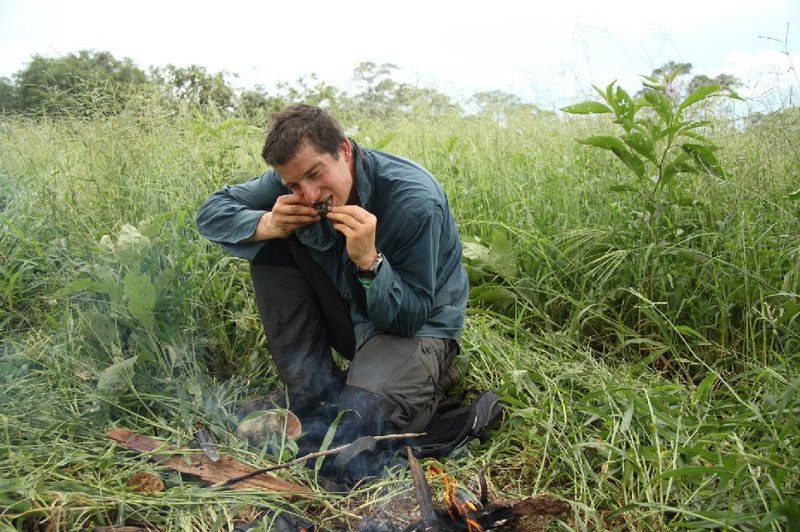 Survival expert Bear Grylls eats something disgusting in Zambia. He’ll be back this summer with a new competition series on NBC.

When I grow up, I want to be survival expert Bear Grylls.

The former star of Man vs. Wild is one cool dude - a man’s man - who put the “viva” in survivalist.

How cool is Bear? He named his three boys Jesse, Marmaduke and Huckleberry. How tough is a kid going to be when his dad names him Marmaduke?

The 38-year-old Grylls, whose given names are Edward Michael, obtained his ursine sobriquet at the tender age of one week. His older sister tagged him with that nickname and his life’s course was set.

He was sailing, mountain climbing and sky diving by the time he was a teenager. He’s a Shotokan karate black belt.

He served three years in the British Special Forces, survived a back-breaking parachute accident in Zambia, climbed Mount Everest at the age of 23, crossed the Atlantic Ocean in an open inflatable boat, and took a hot air balloon to 25,000 feet (2,000 feet is the usual limit for a passenger balloon).

If your small plane crashes in the Gobi Desert, Bear is the guy you want with you.

Man vs. Wild ended its seven-season run in 2011, but how nifty was it? It was swell watching Bear surviving under extreme conditions. He would dine on Thai weaver ant eggs, wring water from the roots of the cholla cactus, use a sheep carcass as a sleeping bag, and ford a raging stream with a kayak made from a windbreaker, duct tape and rattlesnake skins.

Yeah, yeah. He staged certain stuff for the show. He occasionally spent the night at hotels in between scenes and there was always a camera man and sound guy with him when he was “stranded” in the boonies.

Doesn’t matter. Bear is the man.

I was the coolest dad around a couple of Christmases ago when I gave our son a Gerber Bear Grylls full tang, drop point, fixed-blade survival knife with ferrocerium fire starter, emergency whistle and lanyard.

You never know when he’ll be stranded in the unforgiving jungles of Indiana. Now he’s prepared.

But just how prepared will the contestants be this summer when Grylls’ new survival competition series Get Out Alive With Bear Grylls premieres on NBC? Mark your calendars for 8 p.m. July 8 to find out.

The series will be “a nonstop extreme-survival journey” that tests 10 teams of two “beyond their wildest imaginations” as they take on the harsh and dramatic landscape of New Zealand’s South Island.

Every team is assigned a task to take charge of throughout each leg of the journey - including “food,” “fire,” “shelter” and “obstacles.”

Their mission is threefold: survive the wild, journey as a group, and avoid elimination.

Each week, Bear will eliminate one team. In the end, only one duo will remain and claim the grand prize of $500,000.

Grylls says, “The goal is to empower people with the ultimate in both survival and teamwork, and that brings incredible reward, but first there must be some pain.”

Pain! Bring on the pain!

NBC SUMMER PLANS Bear Grylls isn’t the only excitement NBC has set for summer. Here’s what else is in the works.

American Ninja Warrior. The grueling obstacle course competition series returns at 7 p.m. July 1. Those who successfully complete a course in each city move on to the national finals round in Las Vegas.

Camp. We loved Rachel Griffiths in Six Feet Under and Brothers & Sisters. Now she plays an upbeat divorced camp director looking for a fresh start in the comedy/drama Camp, which debuts at 9 p.m. July 10.

I haven’t seen anything of it yet, but one critic said the family camp is “where parents decompress with gin while teens make mischief and fall in and out of love.”

NBC has ordered 13 episodes to last through the summer.

Save Me. Anne Heche (Men in Trees, Hung) stars in the comedy set to debut at 7 p.m. May 23. Heche portrays Beth Harper, a Midwestern desperate housewife who undergoes a spiritual awakening after almost choking to death on a sandwich.

Beth is revived and realizes she has a direct line to God. Yep. She’s a genuine prophet.

NBC has also ordered 13 episodes for this one to get a summer tryout.

Show of hands of those who remember last summer’s winner. Hmm. Not that many.

It was Olate Dogs. Yeah. Last season went to the dogs. Trick dogs. They won a cool $1 million.