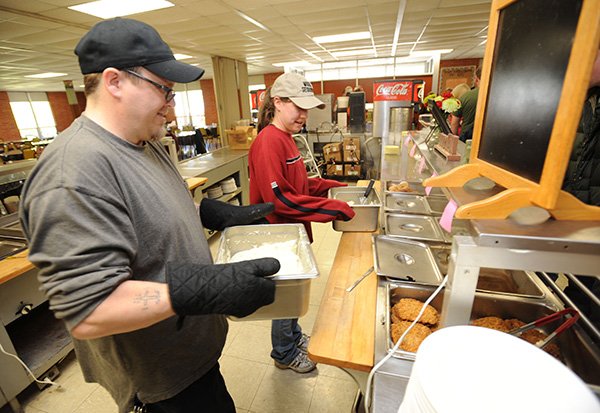 Michael Simpson and Stacy Sloan, both cooks with Razor's Edge, a local catering service, refill food containers Friday, April 19, 2013, while tending to the self-service food line in the Mount Sequoyah dining hall at the Mount Sequoyah Retreat and Conference Center in Fayetteville.The retreat center received a $171,000 loan from the city in January 2012 to complete energy efficiency upgrades to multiple buildings, including a new Energy Star-rated roof on the more-than-50-year-old cafeteria.

FAYETTEVILLE — A new state law could make it easier for Arkansans to make energy efficiency improvements to their homes or businesses.

Businesses or homeowners would repay loans via a special assessment on their property tax bill each year. The idea is that energy savings from the improvements would cover loan payments.

Leding was a lead sponsor of the bill, along with Sen. David Johnson, D-Little Rock. Northwest Arkansas lawmakers Jon Woods, R-Springdale, and David Whitaker, D-Fayetteville, also signed on to the bill. Gov. Mike Beebe signed it into law earlier this month.

So far, no energy improvement districts have been formed, but there is talk of creating one in Fayetteville.

“There’s a lot of people in this community who are aware of it, want it and are pushing for it,” said Joanna Pollock, communications director for Arkansas Energy 2013, and a founding member of the Fayetteville Forward Green Economy Group. “It seems Fayetteville is primed to be first.”

A seven-member, volunteer board would manage each district, issue bonds, loan money to participants and coordinate with the county collector’s office to charge special assessments on property tax bills. For a district comprised of one or more cities, mayors or a mayor’s representative would sit on the district board. If one or more counties are involved, county judges or a judge’s appointee would be represented.

John Coleman, Fayetteville’s former sustainability director who works for a sustainable building consulting company called Viridian, said a key aspect of PACE financing is special assessments stay with a property rather than with the property owner who took out a loan. The provision will encourage property owners who don’t know how long they’ll own a property to make upgrades, Coleman said.

Fayetteville officials experimented with loans for energy efficiency improvements when Coleman worked for the city. The city loaned three nonprofit organizations about $214,000 in January 2012 using federal stimulus dollars made available in 2009 through the U.S. Department of Energy’s Energy Efficiency and Conservation Block Grant program. The city could lend money to other groups once all debt is repaid, said Peter Nierengarten, city sustainability director.

The Chamber of Commerce received $12,500 through the revolving loan fund to replace light bulbs and improve a heating and air-conditioning system that was installed in the early 1990s. The Botanical Garden of the Ozarks added outdoor, light-emitting diode fixtures with $30,500 it received. And the Mount Sequoyah Retreat and Conference Center made a range of improvements using a $171,000 loan, including energy-efficient doors and windows, insulation, a new water heater and an Energy Star rated roof on the more than 50-year-old Galloway Cafeteria.

The loans are to be repaid within 10 years at a 1 percent interest rate.

PACE loans would be repaid within 20 years. It would be up to improvement districts to set interest rates. Steve Patterson, executive director for the Arkansas Advanced Energy Association, a trade organization representing alternative energy companies statewide, said property owners would likely be charged 4.5 to 6 percent interest.

All three nonprofit groups have made loan payments on time, according to Paul Becker, city finance director.

Steve Clark, president and CEO of the chamber of commerce, said he was traveling Thursday and unable to immediately review utility bills. Clark said he expects the chamber to repay its loan three years ahead of schedule.

“We have seen a benefit,” he said.

Ron Cox, executive director of the botanical garden, said it’s hard to judge energy savings because permanent lighting was added that wasn’t there before.

The Mount Sequoyah center saved roughly $2,200, or 18 percent, on electric bills for its cafeteria and meeting and event space in 2012 compared to 2011, according to Ginny Wilson, accountant for the center. That’s less than the center’s $18,000 annual loan payment, but it doesn’t include electricity for the center’s administrative offices, where improvements were also made, or gas and water bills. Those costs are more difficult to compare, Wilson explained, because there is often one meter for multiple buildings. She added the center had a 40 percent increase in building usage in 2012.

“We feel as though we’re experiencing utility savings as projected,” said Lamar Pettus, a member of the center’s board of trustees. “(The revolving loan fund) provided an excellent source of upfront capital to facilitate improvements that probably would have taken five years for us to complete.”

“I think what you’ll see is us getting better utilization of our properties over the next 10 years, and hopefully that will continue the 10 years after that,” Pettus added.

Patterson emphasized PACE financing is voluntary. Cities or counties can elect to form improvement districts. Only businesses or homeowners who seek loans will be subject to a special assessment.

“The only property owners who are going to be affected here are the ones who take out the loans and charge an assessment on themselves,” Patterson said.

He said the financing could have a significant economic impact in Arkansas.

Certified inspectors would have to be hired to determine a property’s baseline energy use and to predict savings. Contractors making the improvements would have to be certified “in the field of energy efficiency and methods of renewable energy installation.” Patterson said companies making the improvements stand to save money on their energy bills and can reinvest that money in the Arkansas economy.

Act 1074, which enables Property Assessed Clean Energy financing in Arkansas, states that the legislation will:

• Decrease the cost of loans for energy efficiency improvements

• Protect participants from the rising cost of electricity

• Increase the value of improved properties

The county assessor’s, collector’s and treasurer’s offices would charge a commission for their services.

PACE financing would primarily apply to businesses, but it doesn’t exclude residential properties.

The Federal Housing Finance Authority has advised home mortgage lenders to be wary of using the financing for residential purposes.

“FNHA believes residential energy efficiency will help improve our use of resources and, in the long term, keep down the costs of home ownership. However, any such program must be carefully crafted to avoid unintended consequences for homeowners and lenders,” James Lockhart, authority director, said in a 2009 letter.

“These loans create an additional potential for the loss of a home through a tax sale or foreclosure if the consumer cannot meet the extra debt burden,” Lockhart stated. He added

Go to the online version of this story at nwaonline.com to read Act 1074.

According to the U.S. Department of Energy, 28 states have authorized PACE financing. Most residential programs have been suspended, however, pending further clarification from the federal government.

“I’m definitely going to work toward getting PACE established in this city,” Jordan said. “Eventually I want the homeowners to be able to take advantage of this if they so choose.”