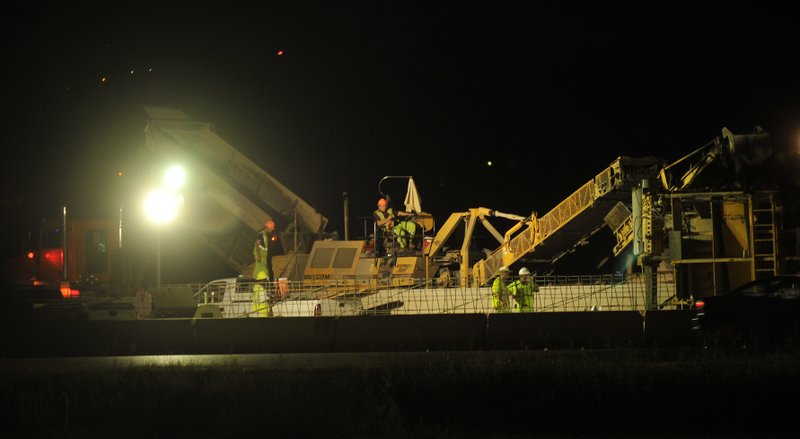 Construction crews work Tuesday evening putting in a new concrete barrier on interstate 540 in Fayetteville between the Wedding exit and MLK Jr Exit. The stretch will include the addition of another traffic lane for northbound and southbound traffic.

NORTHWEST ARKANSAS — The first six-lane section of Interstate 540 in Northwest Arkansas - between Wedington Drive and Martin Luther King Jr. Boulevard in Fayetteville - should be ready for motorists before the end of the year, according to a state highway engineer.

Workers have laid asphalt along the 1.45-mile stretch during the past two weeks. They expect to finish a permanent concrete barrier between the north-south lanes as early as this week.

“We’re looking at the whole project being finished this fall,” said Arkansas Highway and Transportation Department District EngineerJoe Shipman. “They’re moving right along on it.”

The $5.8 million expansion is about 62 percent complete, Shipman said this week. Estimated completion date, according to a project status report, is Dec. 1.

The widening can’t come too soon for drivers of about 56,000 vehicles per day who use the interstate in that area.

“You have people entering and exiting the two interchanges at a close distance. It becomes a congested area very quickly,” Shipman said.

“From my experience, the biggest improvement there you’ll have is two more outside lanes to keep moving traffic,” said state highway Commissioner Dick Trammel of Rogers. “This is the beginning of a safer interstate for all of Northwest Arkansas.”

The state highway department designed the new north and south lanes to fit inside the current four-lane interstate, on the area once occupied by the shoulder and grass median, Shipman said. The asphalt paving for the new lanes is hard for motorists to see right now, because it’s behind temporary safety barriers, he said.

A permanent concrete safety barrier will divide the north-south lanes. Those barrier walls are typically 42 inches tall, he said. But the height of this one varies, climbing to almost 6 feet. That’s because the opposinghighway lanes are not on the same elevation in some spots, he said. Shipman described the wall as reinforced concrete, similar to what drivers see on a bridge.

APAC-Central Inc. of Fayetteville had the winning bid for the project, which started June 21.

The state plans to improve more interchanges and widen a few isolated stretches on I-540 in Washington and Benton counties in the next four years. But expanding the entire congested expressway to six lanes depends on Arkansas voters this fall, Trammel said.

The Nov. 6 statewide ballot asks voters to consider Constitutional Amendment 1, a proposal to raise the state sales tax by a half-percent for 10 years to pay for four-lane highway improvements and local road projects.

Widen I-540 to six lanes from Fayetteville to Rogers.

Construct the first segment of a U.S. 412 bypass between I-540 and Northwest Arkansas Regional Airport in Highfill.

“We’ll start the projectsas soon as we can issue the bonds,” Trammel said. He believes widening I-540 between Fayetteville and Rogers could be finished in three to five years.

Without the sales tax increase, it could take 10 to 15 years to accumulate funding for I-540’s expansion, he said.

The proposed tax won’t apply to sales of food, medicine and gasoline.