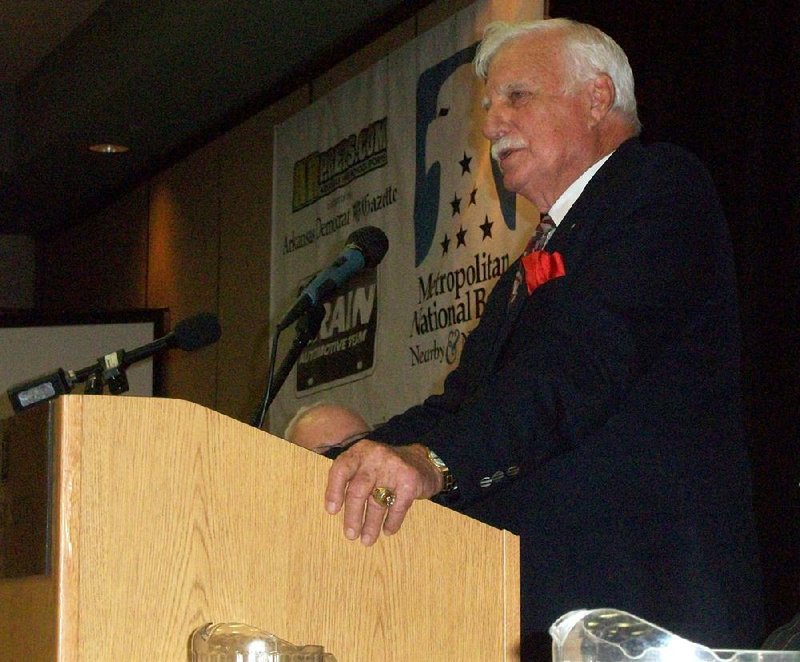 LITTLE ROCK — Howard Schnellenberger has taken pride in building football programs from the ground up.

But the building project he takes the most pride in is Florida Atlantic, which didn’t have a football program until 2001 and won two bowls under Schnellenberger.

“I know some people call me the father of Florida Atlantic football,” Schnellenberger, 78, said Tuesday at the Little Rock Touchdown Club’s weekly luncheon at Embassy Suites. “I remember they talked to me for two days and gave me blueprints. I had no office, had to raise money for my salary, had to raise money for my assistants’ and secretary’s salaries and the entire staff.

“It was like childbirth from your own flesh and blood, going from conception to birth to confirmation and then to a man. I took a lot of pride and joy in building that program.”

Schnellenberger took the Florida Atlantic job in 1999, coached his first game there in 2001 and took the Owls to the NCAA Football Championship Subdivision semifinals in 2003. After moving to the Bowl Championship Subdivision in 2004, Schnellenberger won the Sun Belt Conference title and defeated Memphis in the New Orleans Bowl in 2007. A year later, the Owls defeated Central Michigan 24-21 in the Motor City Bowl.

Schnellenberger, who was 54-78 at Florida Atlantic, said the bowl appearances helped the school raise the money to build the $70 million, 30,000-seat FAU Stadium that opened in 2011.

“When I took that job, my goal was for a start-up team to win a championship and follow what we did at Miami and Louisville,” said Schnellenberger, who is now an ambassador at large for the program and helps raise money with the goal that one day the school will join Conference USA. “I always told people that we’re on a collision course with a national championship and the only variable was time.”

At Miami, he took over a team that had seven losing seasons in the previous nine years. In five years his teams were 41-16, and his 1983 team defeated Nebraska 31-30 in the Orange Bowl for the national championship.

In that game, the Hurricanes batted away a pass on atwo-point conversion attempt with 48 seconds remaining when a tie could have given the Cornhuskers the national championship.

“I believe [Nebraska Coach] Tom Osborne knew that was the one decision he had to make,” Schnellenberger said. “To me, the game is more important than anything else. I remember we blocked a field goal in the first quarter, and I’m sure that weighed in. If they did score, we had Bernie Kosar ready to take us down the field with [48] seconds left.”

Schnellenberger acknowledges his overall career record of 158-151-3 might not get him into the College Football Hall of Fame, but he takes pride in programs he built.

The only places where hedidn’t have success were with the Baltimore Colts (4-13 in 1973-1974), where he was fired three games into his second season, and at Oklahoma, where he resigned under pressure after a 5-5-1 season in 1995.

“I violated one of the rules Coach [Bear] Bryant gave me, and that’s always know who the owner and president are,” Schnellenberger said. “In Baltimore, I didn’t get to know Bob Irsay, who was the owner, and at Oklahoma I didn’t get to know school president David Boren until after I was hired, and by then it was obvious he wanted someone else.

“My character is not to stay for 20 years, but to develop programs, stay through the tough times and get them built.”