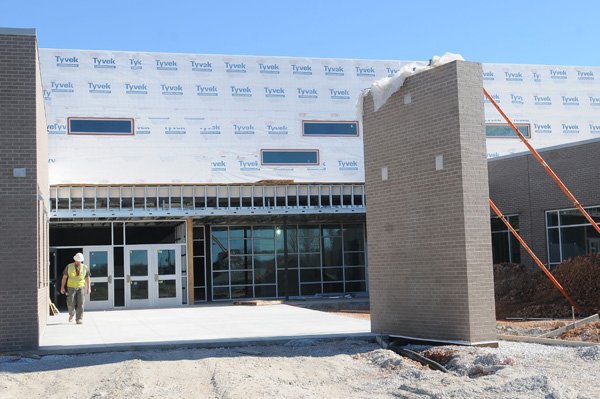 Elementary school borders will be adjusted when Janie Darr Elementary School opens in the fall of 2013. A technology-focused charter school will be an option for 2013’s freshmen and sophomore students Rogers High School has become too crowded and adjustments in which middle school students attend there will be part of the boundary amendment process.

When Janie Darr Elementary School opens in fall 2013, it will open at half of its capacity of 750 students, said David Cauldwell, district business manager. Houses are going up in the Cross Creek subdivision near the new school just off Mount Hebron Road, and administrators anticipate growth in southwest Rogers.

One goal of changing boundaries is to leave a little room at other elementary schools. Right now, some schools have no space to add another class and children are making single-year transfers, Cauldwell said.

“The goal is to keep kids settled the most you can,” he said.

The new school is inside what is now the far western boundary of Elza Tucker Elementary School, but the closest elementary school geographically is Bellview.

There is no more classroom space at Bellview, said Principal Dan Cox.

“I love all my families. I don't want to lose any of them,” he said.

However, Cox is excited about breaking Bellview’s geographic isolation as the only Rogers school west of Interstate 540. Darr Elementary will be a partner school for Bellview, and the staff will do their best to make transitions easy for any children who need to change schools, Cox said.

Parents can ask if their children will be affected by boundary changes, but school personnel don’t have an answer, said Traci Hensley, Tucker assistant principal.

“We don't know because they're still in the process,” Hensley said.

Administrators, parents and principals began meeting earlier this month to iron out boundaries for the new school.

Nothing is official yet, said Sterling Wilson, School Board representative to the Boundary Committee. The process is working well, he said. A series of committee meetings will precede a January public meeting. Input from that meeting will be incorporated into the plan the School Board sees in February.

“Would you rather live in a community where they're closing schools?” he asked.

Change will be uncomfortable, Wilson said, but all the schools are good. People forget, he said, that before the second high school was opened, Rogers officials redrew boundaries almost every year.

The path students take from their elementary school, to middle, to high school is part of the review. Rogers High School has more students than Heritage High School, and the areas that feed into Rogers High are growing faster, Cauldwell said. A New Tech-affiliated school will open in fall 2013 and absorb some 300 freshmen and sophomores who choose to attend. However, the technology focused charter school will draw students equally from both high schools.

Boundary Committee meetings began in November. A public information meeting about the proposed plan will be available by the end of January. A vote finalizing boundaries is anticipated at the February School Board meeting. New boundaries will take effect during the 2013-2014 school year.

Rogers High School will need space, Cauldwell said. Changes in who goes to which high school would trickle down through the middle school and elementary path.

Some students will be able to stay in schools they attend now, even if their assigned school changes. High school students, and students entering their last year of middle or elementary school this fall, will not be required to change schools if they have their own transportation.

Wilson, who has one child in high school and another in middle school, said he may be one of the affected families.

“I might have two kids at two different high schools,” Wilson said.

State rules set the maximum number of children in a classroom: 20 in kindergarten; 25 in first through third grades; and 28 in fourth and fifth grades, Abernathy said.

Since school began this fall, 78 children temporarily transferred to another elementary school. During the same period last year, there were 62 children in the same situation. Administrators always try to minimize student transfers between schools, she said. Familiar teachers and hallways can make children more comfortable, but all schools are held to the same standards, Abernathy said.

“Wherever their child goes in Rogers, they'll get a good education,” Abernathy said.

See the current map of Rogers School District attendance boundaries at http://www.rogersschools.net. Look under the tab schools, boundaries/bus stops to find a PDF copy of the boundary map.