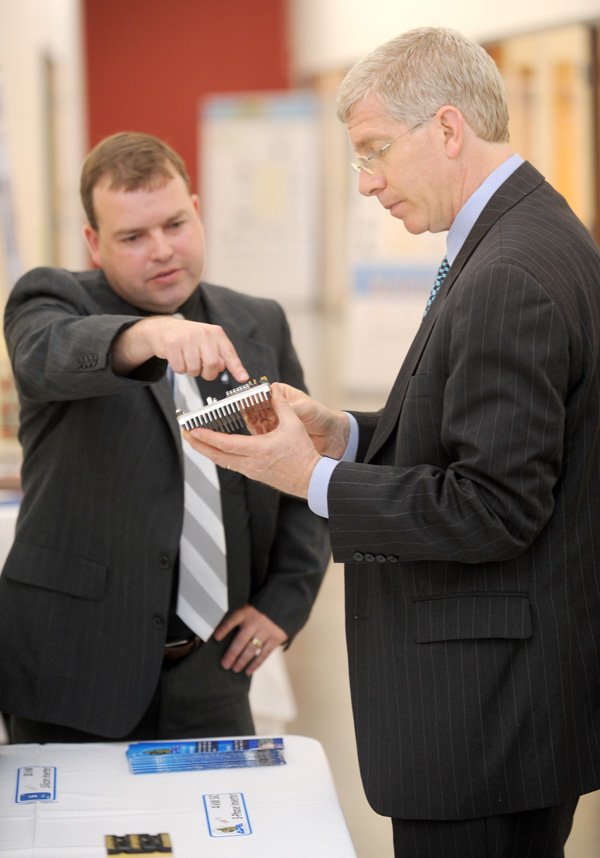 Alex Lostetter, left, CEO of Arkansas Power Electronics International, shows some of the devices Wednesday his company develops to Daniel Poneman, deputy secretary of the U.S. Department of Energy, during a tour of the facility in the Arkansas Research and Technology Park in Fayetteville.
Editor's note

The headline on this article was modified from the original post to correct the amount awarded to the Fayetteville firm.

Daniel Poneman, deputy secretary of the U.S. Department of Energy, detailed the department’s Small Business Innovation Research program from the University of Arkansas’ Research and Technology Park where Arkansas Power Electronics International is located. The company is one of about 70 in 22 states that will receive Energy Department grants.

For more information about the U.S. Department of Energy’s Small Business Innovation Research program, including a list of 2012 grant recipients, go to science.energy.gov/sbir.

“Small businesses are the backbone of our economy, employing half of all workers in America and creating two out of every three new jobs,” Poneman said in a prepared statement. “The grants and contracts announced today are just the latest step in the Energy Department’s efforts to support the critical role that small businesses are playing in creating jobs for American workers and expanding our country’s clean energy economy.”

Alex Lostetter, Arkansas Power Electronics’ CEO, said his company would use a $150,000 award to develop a high-voltage power module aimed at more efficiently converting electricity from one form to another. The technology has a range of applications, including making the transfer of electricity from conventional power lines and plug-in chargers for hybrid-electric vehicles more efficient.

Lostetter said the technology can eliminate up to 90 percent of energy loss in certain types of electric conversions.

Arkansas Power Electronics also received about $5 million in 2010 from the Toyota Motor Corp. and another Department of Energy program to develop a new charging apparatus for next-generation Toyota Prius hybrid cars.

The chargers are about one-fifth the size of devices used and take about one-eighth of the time to charge, Lostetter said.

Department of Energy officials also toured two other Fayetteville companies, NextGen Illumination and Silicon Solar Solutions, during their visit to the Arkansas Research and Technology Park.

The company’s CEO, Doug Hutchings, called Wednesday’s visit “a tremendous opportunity to get the word out about what we do and all the other great things that are going on in Northwest Arkansas.”