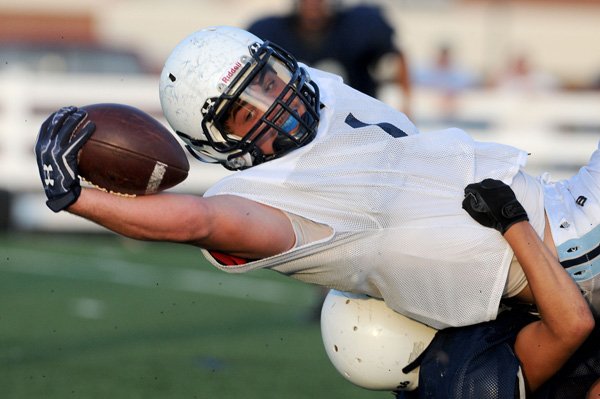 Nick Byrne, Springdale Har-Ber wide receiver, reaches out for a touchdown during a scrimmage Thursday at the school’s practice field. TOUCHDOWN REACH

SPRINGDALE — Springdale Har-Ber’s Blue-White spring game was played under a setting sun Thursday, which is ironic given the Wildcats look to be on the dawn of a new era.

The coaching staff might be identical from last season, but Har-Ber put on display why it’s not looking to make another disappointing exit come state playoff time in the fall.

New faces at all but two offensive positions didn’t seem to matter. The White (offense) squad’s first, second and third teams torched the Blue (defense) team, staying unpredictable by spreading the ball around and scoring seven touchdowns during the 50-minute scrimmage.

Wildcats’ coach Chris Wood was excited after the game, talking about the offense’s potential despite losing so much star power from a year ago.

“The thing we’ve been able to do in spring ball with those skill positions, from my senior class to my junior class, that whole group has been able to contribute,” Wood said. “They’ve improved as individual players, which has made the whole unit better.”

Camden Scott, Gus Vitt and Miguel Salgado had more than 60 receiving yards and a touchdown each. Andrew Dilatush had a 46-yard touchdown reception, and Austin Pearce was “Mr. Reliable,” bringing down four passes for 42 yards with three of the catches occurring while being on the wrong end of a big hit.

Nick Byrne, a rising senior who holds a scholarship offer from Arkansas State, had 23 receiving yards and a touchdown where he stretched backward across the goal line while being stood up by a cornerback.

Like his coach, Byrne feels the receiving corps is going to be solid from top to bottom, especially having so many multisport athletes on board.

“We had a lot of younger guys who were in baseball and just got with us,” Byrne said. “They’re taking a big role and are doing great.”

Also making their marks were the quarterbacks who were battling for an edge in the starting position race. Pierce Phillips and Braxton Jester took the bulk of the snaps with the first team and turned some heads.

Jester, a rising junior who plays guard for the Har-Ber basketball team, completed 7 of 11 passes for 149 yards and two touchdowns while gaining 54 yards on three nondesigned runs.

Phillips, the only quarterback with varsity experience, went 9-for-15 for 132 yards and connected on two scores.

Wood said he liked the job Phillips did by making good reads, saying the only throwing mistakes made were overthrows on deep fades — which he’d much rather see than not putting enough strength into a pass and getting it picked off.

Phillips agreed with his coach’s assessment and said he’s dedicated on correcting mistakes.

“I felt pretty good. I thought I had a couple of mental errors, but that’s something that can happen in the spring,” Phillips said. “We’re doing a lot of stuff in 7-on-7 and practice that works with receivers, throwing against air and working on timing.”

Thursday was the final spring practice for Har-Ber. The Wildcats will return to action this summer with 7-on-7 tournaments throughout the region.