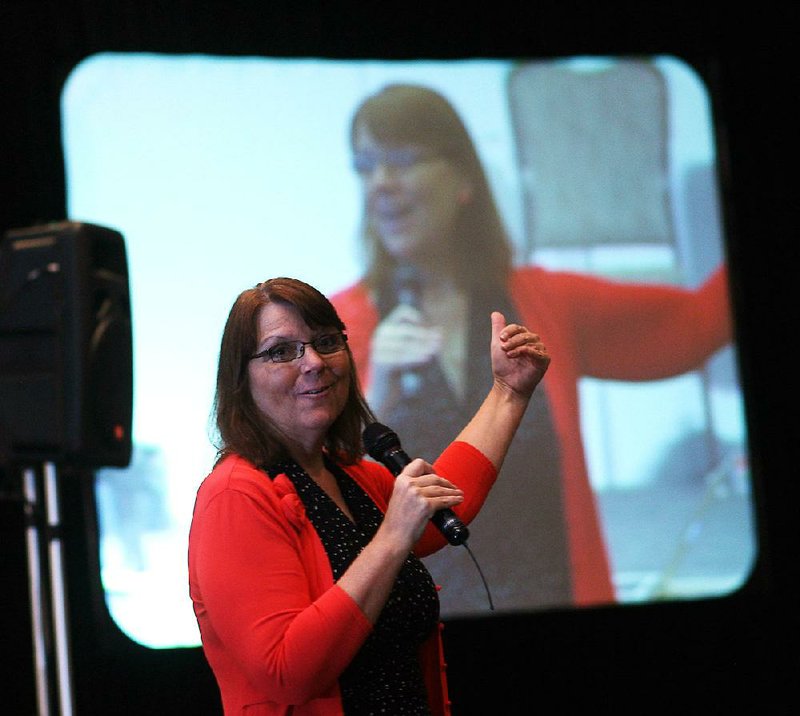 FAYETTEVILLE — Cindy Lovell was introduced to Mark Twain’s writing in the fourth grade.

That’s when she became a “Twainiac,” said Lovell, a featured speaker at the seventh annual University of Arkansas Literacy Symposium.

Lovell, a former elementary school teacher who now directs the Mark Twain Boyhood Home and Museum in Hannibal, Mo., uses Twain’s life to show teachers how they can integrate music, history, literature and creative writing into their lessons.

The two-day symposium, which ended Saturday afternoon, drew 100 educators to the Fayetteville Town Center on the square.

Earning professional development credit, the teachers heard from featured speakers who discussed teaching strategies specific to the Common Core Standards, a curriculum that was developed by national committees of education and content experts at the direction of the National Governors Association and the Council of Chief State School Officers.

“We’re all getting excited about the Common Core Standards,” Lovell told the group. “They’re really giving us an opportunity to get creative again in our classes.

“That’s been missing for a long time,” she said, drawing nods of approval from the audience.

The standards were adopted by the ArkansasBoard of Education in July 2010. Starting with the 2011-12 school year, the state’s public school kindergarten, first- and second-grade pupils and their teachers began using the curriculum.

The standards in mathematics and English/language arts are replacing traditional state education standards in Arkansas and 44 other states and the District of Columbia.

Teaching based on the national standards will expand in Arkansas to third through eighth grades for the forthcoming school year and to the high school grades in 2013-14.

Lovell, in an interview on Friday, said she hopes teachers will encourage creativity and critical thinking in the classroom while they use the standards.

“Unfortunately we have sort of ‘bubble-wrapped’ our children,” she said. “We protect them from everything.In the classroom it is a ‘bubbled-in’ world. We have kids bubbling in answers. Life is not like that.”

In addition to serving as director of the museum, Lovell is an associate professor of education at nearby Quincy (Ill.) University.

“My personal mantra as an educator is to make lessons personal, meaningful and relevant,” said Lovell, a former elementary school teacher who holds a doctorate in education from the University of Iowa.

“I’m a high school dropout,” she said. “I was one of those kids who was really bored in school. I am always fascinated by the teachers who engage students. That’s my mission.”

In 2010, Lovell co-produced Mark Twain: Words & Music, a double-CD that combines country and bluegrass music and the spoken word to tell the life storyof Twain, whose real name was Samuel Langhorne Clemens.

On Saturday, Nashville, Tenn., county/bluegrass artist Carl Jackson, along with musicians Jerry Salley and Val Storey, treated the audience to songs they performed on the album.

The trio accompanied four speakers who read an abridged version of the spoken word portions on the CD: Lovell, speaking as Twain’s daughter, Susy; Chris Goering, the narrator; Grant Bearfield, who portrayed Huckleberry Finn; and Ebenezer Bowles, who spoke as Twain.

“I wanted to be able to tell Twain’s life from birth to death in an entertaining way, in a factual way,” Lovell said on Friday. “I wrote it for a big audience. There are dozens of ways to use this in the classroom. I want it to be a good model for how the Common Core standards will work.” To contact this reporter: