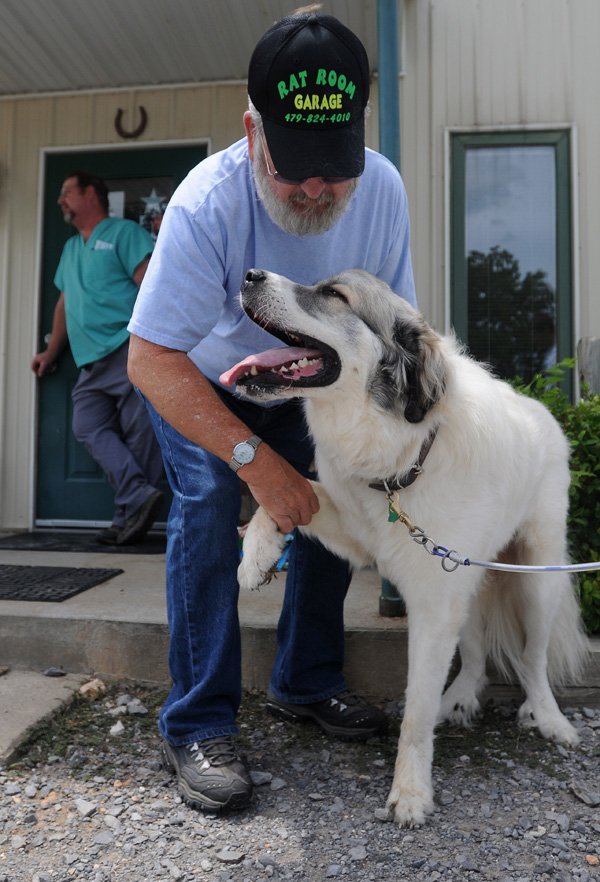 Sarge, a Great Pyrenees, shakes hands with owner Ron Williams outside Dr. Tim O’Neill’s veterinary office in Farmington during a three-week checkup. Sarge, who suffers from hip displaysia, received stem cell therapy May 30 to ease the pain and regrow cells damaged by a genetic disorder. Sarge is the fourth animal O’Neill has performed the therapy on since he began treating animals with stems cells in March.

AFarmington veterinarian is the first in Northwest Arkansas using stem cell therapy to ease aches and pains in dogs and horses as an alternative to surgery or long-term medication regimens.

Tim O’Neill started off ering stem cell therapy at his oft ce in March after getting training andequipment from InGeneron, a Houston company that developed the in-house procedure. The therapy was available for several years in limited areas of the country, but it required sending tissue samples to a lab to have the stem cells harvested and processed.

“I feel like it’s one way to look at the future of medicine and surgery, which is regenerative medicine,” O’Neill said. “To me, it’s just fascinating.”

O’Neill has performed the procedure on three dogs with arthritic hips and a cutting horse with a gimpy front leg.

“You can do it on any species of mammal and it’s just their cells,” O’Neill said. “There are no rejection problems and no adverse reactions. The only reaction I’ve seen would be a little swelling where we harvest the fat.”

Surgical time is minimal, about 10 to 15 minutes. The sample is prepared and run through a centrifuge for a couple of hours to concentrate the stem cells. Then the cells are injected into the site of the problem, a dog’s hip for example.

The procedure is done completely in-house in less than a day.

“The ability to do the stem cell process in my office instead of sending it off really intrigued me,” O’Neill said. “It’s lab work and I’ve always been a little bit of a lab rat.”

For a total hip replacement on a dog, a referral to a specialist is necessary and it costs about $6,000, O’Neill said.

“Most people can’t do that,” O’Neill said. “By off ering (the alternative) here, I get to do it, it’s cheaper so clients are able to take advantage of it and, it’s so much less invasive than surgery.”

The procedure costs about $900, which isn’t cheap, but O’Neill said pain and joint medication for a large dog can easily run $1,000 a year.

“All meds are gonna do is cut the pain. It’s not going to regenerate anything and it’s just gonna get worse,” O’Neill said. “Stem cell therapy will heal some or allthe damage.”

A reduction in pain may be seen as early as one week, O’Neill said. More results should be seen in one to three months as healing progresses.

Sarge, a Great P yrenees weighing more than 100 pounds, was having trouble walking and was in constant pain from hip displaysia even though he is just about 1 year old. Sarge’s owners, Doris and Ron Williams of Cane Hill, considered several courses of treatment before deciding on stem cell therapy. Hip replacement was too expensive. Pain medication made Sarge sleepy.

“We got him and we just fell in love with him. We’re so hopeful that this will be a longtime cure and that he’ll be with us for many years,” Doris Williams said. “It’s bad enough when you fall in love with one and they’re healthy, but when they get something like this, it seems like you hurt right along with them.”

Sarge was treated on a Wednesday and running three days later, Williams said.

“He was in so much pain he was having trouble even getting up,” Williams said. “It’s only been three weeks and he’s already back bouncing around like he did before and, obviously, he’s not in any pain. So far, it has been like a miracle for him.”

Williams said the results have been worth the cost.

“We’re kind of excited about this because I think it will save our pet. That will make us happy and make it more than worth what it cost us,” Williams said. “I’m hopeful that maybe it can keep a lot of beloved pets from having to be put down.”

Williams said she’d like to see the procedure readily available for humans. The procedure is in the experimental stage.

“I have the same problem with my hip that Sarge has and I asked Doc if he might consider a two for one,” Williams said with a laugh. “I don’t see why Doc couldn’t just go ahead and do the same thing on me.”

The $40,000 cutting horse with the bad ankle limped and had to be given pain medication to be ridden, O’Neill said. The horse is back working cattle with no medication required.

The animal rights group People for the Ethical Treatment of Animals has endorsed the therapy, as long as no animals are exploited, according to the group’s website.

“On horses, we use liposuction on their butts,” O’Neill said with a laugh.

Stem cell therapy not only alleviates the pain associated with arthritis and other similar ailments, but helps the animal feel younger, O’Neill said.

“This is another opportunity to off er quality of life to the patient and the client,” O’Neill said. “That’s what it’s all about.”