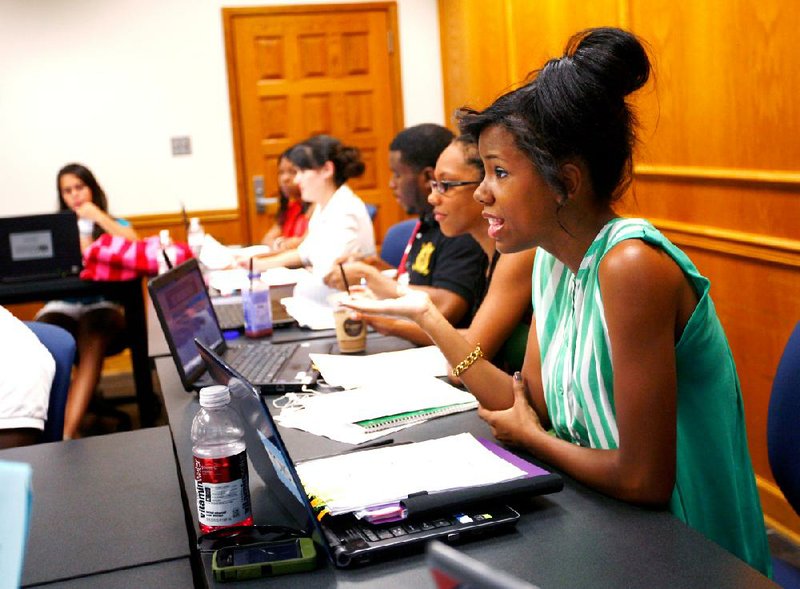 Arkansas Democrat-Gazette/JASON IVESTER --07/19/12-- Kyndal Powell-Hicks, a student at Oakwood University, responds to a question during a course for pre-law students from other universities who are participating in the School of Law's DiscoverLaw.org Prelaw Undergraduate Scholars (PLUS) Program inside Waterman Hall on the Fayetteville campus for the University of Arkansas on Thursday, July 19, 2012.

Specifically, Nance and the class deconstructed the U.S. Supreme Court’s recent decision to strike down the federal Stolen Valor Act of 2005.

The law punished violators with as much as a year in prison. Justices of the high court, in a 6-3 vote, ruled that people can’t be prosecuted for lying about having received military medals.

Should it be criminal to lie about receiving such medals, Nance asked the students, who are participating in a summer academic program for pre-law students.

The students flipped through their copies of the court’s opinion. Some raised their hands to point out what the justices had determined.

The conversation in the class Legal Systems and Process continued for another 45 minutes, until Nance’s session was over and the students started their next course, Legal Research andWriting.

Coming from as far away as California, the students were chosen to attend the Law School Admission Council’s DiscoverLaw.org Prelaw Undergraduate Scholars Program.

UA is one of nine host law universities for the program, according to the council. Others include the University of Missouri-Kansas City, University of New Mexico and Rutgers University in New Jersey.

The four-week program is supported by a three-year, $300,000 grant from the council.

It is meant for pre-lawstudents entering either their second- or third-year of college from “historically underrepresented populations” in law schools, according to the council.

That means they are black, Hispanic, Asian American or American Indian. Or they are first-generation college students or those with financial need, according to the council.

The grant covers the cost of instruction, room and board, and stipends.

Founded in 1947, the council administers the Law School Admission Test. A nonprofit corporation, the council earmarks a portion of its budget to promote broad-based diversity in legal education and the legal profession.

UALR was one of the first schools to host a summer program through the Law School Admission Council, said Tonya Oaks Smith, spokesman for the UALR law school.

After participating in the council’s program for seven years, it has funded its own program for 20 to 25 students a semester for the last three years, Smith said.

This is the first year for the program at UA-Fayetteville.

“I can tell the students are really getting something out of it,” said Kalesha McGraw, assistant director of admissions for the UA School of Law and director of the summer program.

One goal of hosting the program is that some of thestudents will apply to UA’s law school, she said.

“That would be nice,” she said, “but it’s more about the thought that we are going to expose people to law school. We want them to go to any law school.”

In addition to attending classes that are intended as an introduction to those they will take in law school, the students have attended court in Fayetteville and Fort Smith and dined with local attorneys and judges.

“I’ve never had the opportunity to get access to lawyers and judges,” said SaleciaWalls of Little Rock, a junior political science major at Arkansas State University at Jonesboro.

Kyndall Powell-Hicks, a junior international studies major at Oakwood University in Huntsville, Ala., said she had never been inside a law school before coming to UA-Fayetteville.

“Everyone in my family is a doctor,” said Powell-Hicks, who is from Anaheim Hills, Calif. “The actual content is so interesting.”

The students attend classes at least three hours a day. By the end of the program on Aug. 3, they will have heard from guest speakers, attended individual meetings with UA faculty and staff, and received assessments on their reading and writing skills.

“Some of the students have requested it, and others have not,” Albertson said. “For those that do want credit, we work with the students’ undergraduate institutions to get everything squared away.”

Tatiana Posada, a junior international affairs major at the Georgia Institute of Technology in Atlanta, said she applied for the program because she wanted to get a taste of what law school would be like.

“It has been better than my expectations,” Posada said.

In 2006, Nance became the first black dean at the state’s oldest law school. Thursday was her last session with the pre-law group.

“It’s the joy of meeting future colleagues,” she said.