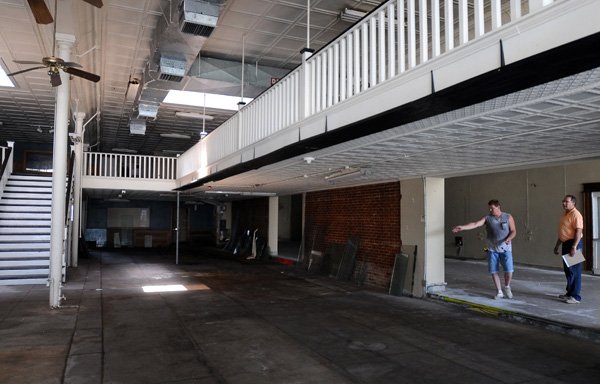 Luis Martinez, left, managing director of Genesis-CMG, talks Wednesday with Larry Collins about repairs he wants made to the old Famous Hardware building at 113 W. Emma Ave. in Springdale. Martinez plans on rehabbing the building and finding tenants for the space. Downtown Springdale Alliance is trying to raise money for a plan to redevelop downtown Springdale. The plan will be used in applying for a development grant.

SPRINGDALE — The Downtown Springdale Alliance is one vote away from corralling $100,000 to pay for a redevelopment plan.

The city Public Facilities Board tabled a vote Wednesday on a $33,000 contribution to the alliance, because only three of five members were present and one announced he would abstain from voting.

The alliance received a $34,000 pledge from the City Council on June 26. The Advertising and Promotion Commission on Tuesday approved spending $33,000.

The city,commission and board would each have a contract with the alliance, calling for it to hire a consultant within three months to complete the plan, the contracts state.

The plan would be part of a grant application, said Mayor Doug Sprouse. The grant would be used to help start the plan. The grant donator has asked to remain anonymous for now, he said.

“We have been told we would have a good chance of receiving the grant,” Sprouse said. “It would be substantial. We would be getting a good return on our investment.”

The board didn’t vote on the contract after Chairman Jim Crouch said he was the attorney for the alliance and didn’t want any appearance of impropriety. Crouch said he’s donating his legal service to the alliance.

The city’s downtown district, defined in a land use plan, is bound by Pleasant Street on the west, Huntsville Avenue on the north, Old Missouri Road on the east and Watson, Quandt and Caudle avenues on the south.

Mark Wann, board member, missed the meeting because he was sick. Rick Barrows, the fifth member, recently resigned and hasn’t yet been replaced.

The delay on the money will not be a holdup to the study, said Kent Hirsch, alliance chairman.

“We’re not bumping up against any deadlines,” Hirsch said. “We are taking requests for qualifications now and have not set a date to pick a company for the study.”

Mayor Doug Sprouse, who attended the board meeting, said he would tell the alliance a vote on the money would have to wait.

Another entity looking at investing in downtown Springdale is very interested in the study. Luis Martinez, managing director of Genesis-CMG, said the private company is helping renovate the Famous Hardware building on Emma Avenue.

“We help property owners renovate their buildings and subsidize the renters until they get their business going,” Martinez said. “We are hoping to raise $40 million to invest in downtown Springdale.”

The company helped open the Art Exchange on Emma Avenue, according to its prospectus.

“I would love to see them become very successful,” Hirsch said.