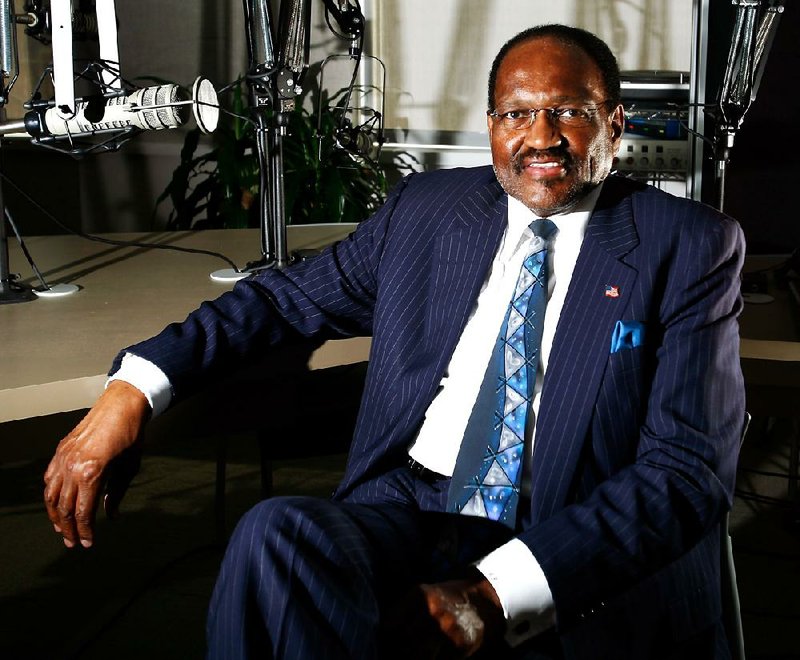 FAYETTEVILLE — As a young DJ in Memphis in the early 1960s, Al Bell was determined to come up with an attention-grabbing signon.

After listening to conversations and speech patterns in the city’s black community, especially in pool halls and barber shops, Bell began introducing himself to listeners this way:

“This is your 6-foot-4 bundle of joy, 212 pounds of Mrs. Bell’s baby boy, soft as medicated cotton, rich as double-X cream, the women’s pet, the men’s threat, the players’ pride and joy, baby boy Al Bell.”

Bell smiled Thursday while he recited the words 50 years later during an interview in, ironically, a radio station in Fayetteville.

“I wanted to give them something they could laugh about and relate to,” Bell said, now 71 and looking sharp in a pinstripe suit, monogrammed cuffs and a silk pocket square.

“That was designed to appeal to the ladies,” he added with a laugh.

Later in the day, Bell, a native Arkansan and former executive at Stax Records in Memphis and Motown Records in Detroit, addressed a crowd of an estimated 200 at the University of Arkansas at Fayetteville during a freeevent titled “An Evening with Al Bell.”

In his remarks at the university, Bell said more attention needs to be paid to the contributions to American music made by Arkansas-Mississippi Delta. He talked about the famed “Crossroads,” the intersection of U.S. 61 and 49 in Clarksdale, Miss., the place in musical mythology where blues musicians sold their souls to the devil for success.

“Much of what is profoundly American and what people love about America has come from the Arkansas-Mississippi Delta,” he said. “The Arkansas Delta, a land of vastly rich soil, is equallyknown for its vastly rich musical heritage.”

In addition to Bell’s talk, the program in the Arkansas Union Theatre included performances of Motown, soul and R&B hits by the UA Jazz Ensemble.

Bell was born in Brinkley and grew up in North Little Rock, where he now lives. His three-hour radio show, “Al Bell Presents American Soul Music,” airs from 7-10 p.m. Fridays in Memphis on WDIA-AM, 1070.

In an interview at UA’s public station KUAF-FM, 91.3, an affiliate of National Public Radio, Bell also talked about the origin of his writing “I’ll Take You There,” a No. 1 single in 1972 for The Staple Singers, and his experiences in the civil rights movement as a teenager.

In the summer of 1971, Bell’s younger brother Louis was murdered in North Little Rock. After the funeral, Bell, then chairman and co-owner of Stax, sat on the hood of a junked school bus in his father’s back yard and phrases began forming in his mind.

“I know a place, ain’t nobody crying,” he repeated aloud on Thursday, quoting from what would become the lyrics of “I’ll Take You There.”

“Ain’t nobody worried,” Bell continued. “Ain’t no smilin’ faces, lyin’ to the races.”

“I heard all of the music in my head,” Bell said. “It was a turning point in my life. It freed me.” Bell joined Stax in 1965 and eventually became the label’s chairman and co-owner,working with soul pioneers Isaac Hayes, Otis Redding, the Staple Singers and The Emotions.

He wrote some of the label’s best-known songsduring its 1960s and ’70s heyday, including “I’ll Take You There” for The Staple Singers and “Hard to Handle” for Redding.

He later became chairman of Motown.

Bell was inducted into the Arkansas Black Hall of Fame in 2002 and he received the 2011 Grammy Trustee Award, a lifetime achievement award for those within the recording industry.

Prior to his days as a record executive, Bell marched for civil rights as a teenager in Georgia. In 1959 and out of high school, he worked for a year with the Rev. Martin Luther King Jr.’s Southern Christian Leadership Conference.

Bell said he was cajoled to join the movement by a former English teacher at Scipio A. Jones High School in North Little Rock.

“She saw something in me that I didn’t see in myself,” he said. “She said, ‘Have you heard of the Rev. Martin Luther King Jr.?’ I said, ‘No.’ She said he was going to provide some leadership ... ‘that’s going to change how we are being treated as a people.’ I didn’t see him a lot, but I fell in love with Dr. King.”

Bell moved to Memphis in 1961 when he started working at WLOK radio.

His appearance was sponsored by UA’s African and African American studies program, an interdisciplinary program housed in the J. William Fulbright College of Arts and Sciences, and the Office of Diversity Programs in the school’s Sam M. Walton College of Business.