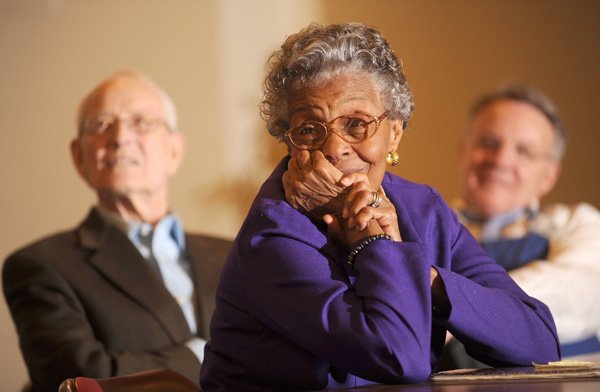 Peggy Taylor Lewis, a member of the first integrated class at Fayetteville High School, smiles Feb. 1 while sitting alongside Harry Vandergriff, left, and Bo Morton during as a part of the Wonderful Wednesdays program series at First United Presbyterian Church in Fayetteville.

NORTHWEST ARKANSAS — When Nancy Mays moved to California in 1959, she was shocked to find that people expected her to be a racist.

They associated Arkansas with the forced integration of Central High School in Little Rock in 1957, shelearned.

Her experience was very different.

Fayetteville High School had integrated peacefully in 1954, four months after the U.S. Supreme Court ruling in Brown versus the Board of Education of Topeka, Kan.

“We didn’t know we were doing anything special,” Mays said. It wasn’t until class members gathered for their 20th reunion that they realized they had likely been the fi rst integrated graduating class in the Old Confederacy, she said.

Mays and several of her classmates relived the experience at a panel discussion Feb. 1 at First United Presbyterian Church in Fayetteville.

The discussion was part of the Wonderful Wednesdays series at the church.

Panelists included Peggy Taylor Lewis, a black American who entered the high school in her junior year. She was joined by classmates Boyce Davis and David McClinton, whose father, Clark, served on the school board.

Bo Morton was younger, but his father, Bill, also served on the board.

Harry Vandergriff, who later served as superintendent of Fayetteville schools, was a football coach and history teacher at the time.

“People like (principal) Louise Bell and Harry Vandergriff showed us byexample how to act,” Mays said. “Kids are pretty idealistic. If you show them what you expect, point out why you believe like this, they will follow.”

David McClinton was 15 when the landmark decision came down. “I didn’t have a clue,” he said, echoing the naivete of many of his classmates.

As soon as the local school board announced it would integrate - four days after the Supreme Court ruling - the telephone in his home started “ringing off the wall,” he said.

Some of the calls were abusive, and the elder McClinton soon learned to ask callers for their names, his son said. There were so many he didn’t recognize that he began to wonder if the protesters were from Fayetteville.

The calls continued through the summer, becoming more abusive as the start of the school year drew near. Sometimes there would be heavy breathing or hang-up calls in the middle of the night, McClinton said.

Like other school board members, Clark McClinton stood fi rm.

“He was not subject to intimidation,” his son said. “His resolve was great. The more he was treated that way, the stronger his resolve was.

“They (the school board members) knew what they were doing was right, knew what should be done,” he said.

When the actual start date rolled around, the only protester was a lone woman with a sign, he said.

Bo Morton was only 6 when the school board made its decision, so he doesn’t remember the phone calls, he said.

He does remember the debate continued through the next several years.

“It was a big topic of discussion - and a real source of pride,” he said. His father was most proud of his friend Harry Vandergriff and his principled stand for the football team, Morton said.

No black students tried out for the team the first year of integration. The second year, there were two blackplayers. Several schools in the conference refused to play Fayetteville unless the school left its black players at home, Vandergriff said.

Part of the reason things went so well in Fayetteville is that school administrators took a proactive stance, Vandergriff said.

Superintendent Virgil Blossom, who left Fayetteville in June 1954, had been preparing them for months, Vandergriff said. He knew the Supreme Court would vote in favor of desegregation.

There also was a fi nancial consideration, Vandergriff said. The Fayetteville school district was paying tuition for its black students to go to school in Fort Smith, Hot Springs and Oklahoma.

Blossom met with Bell, the high school principal, and Minnie Dawkins, principal ofthe black elementary school, Vandergriff said. The three mapped out a plan. After the Supreme Court decision was made, Bell talked with the teachers.

The 26 Club, a hospitality club at the high school, was recruited to make the new students feel at home.

“When school did finally start, everybody was on the same page,” Vandergriff said.

Wayne White, who took over as superintendent, continued in the same vein, Mays said.

Peggy Taylor Lewis was one of seven black students who started classes at Fayetteville High School that fall.

She recalled walking up the front steps amid a seaof white faces. Many were turned to her in curiosity, she said. She didn’t let that deter her. Instead, she thought of her parents, and their lack of access to education. Her mom made it through the third grade and her dad through the fourth, she said.

“There’s something out there that I want,” she remembered thinking. “I do not want to work on a farm for the rest of my life.”

The white students assigned as escorts offered “the sweetest hospitality,” she said. They accompanied the newcomers everywhere for the fi rst two weeks.

Bell was always nearby, watching, Lewis said. Small in stature, she was a woman who commanded respect, the panelists agreed.

“If she told you to do it, by God, you’d better do it,” said Boyce Davis, a white classmate. He has “a powerful memory” of Bell coming into his homeroom to announce that two minority children would be joining them, he said.

“She said she expected us to support them and make sure they were not pestered, bothered or otherwise hurt.”

Lewis recalled receiving her own set of instructions from black adults in the community.

“They told us how we were supposed to act,” she said. “They told us to act (like young adults). ‘Be yourself and obey,’” they said. “Whatever was going on, we were not going to have a lot of trouble.”

After she graduated, Lewis went to Philander Smith College in Little Rock. She watched the integration crisis there with amazement, she said.

“I thought, ‘My goodness, we didn’t do this in Fayetteville. Who are these people?’” she said.