Quebec ‘rail cruise’ is ticket to scenery, sports, socializing, if you can resist the lure of food by KAREN HAMMOND TRAVEL ARTS SYNDICATE | April 8, 2012 at 2:48 a.m. 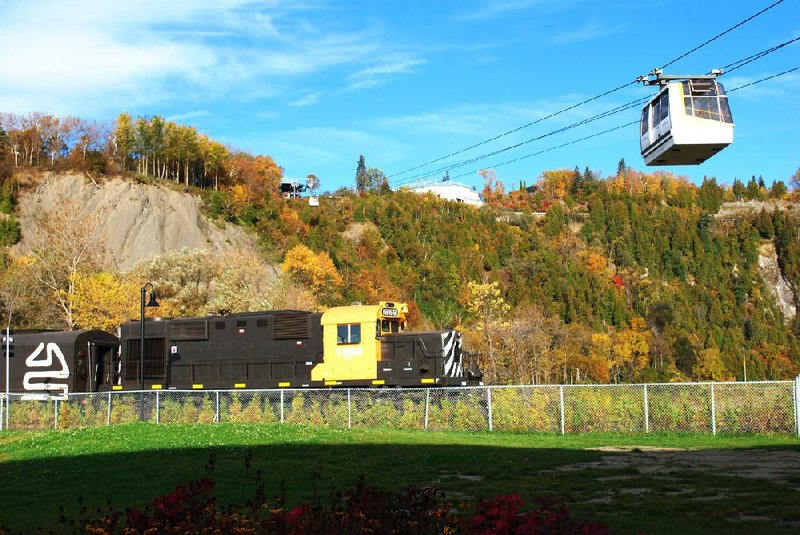 The Train of the Massif of Charlevoix prepares to leave the station just outside of Quebec City. Passengers enjoy a gourmet lunch on the outbound trip and an equally gourmet dinner on the return.

CHARLEVOIX, Quebec, Canada — The advertisement said, “rail cruise.” Of course, I was intrigued.

The trip — which actually takes place by train — promised to run beside, and often almost in, the St. Lawrence River before ending in the town of La Malbaie in the heart of picturesque Charlevoix County, Quebec. On a round trip, a gourmet lunch en route and an equally festive dinner on the return trip were included. All of which left just one question: When do we leave?

The Train of the Massif of Charlevoix departed from a modern station near Chute Montmorency, a majestic waterfall just a few minutes from the center of Quebec City. Moments after hopping onboard one of the reconditioned rail cars and settling into comfortable seats at a table for four, my husband and I were conversing with our seat mates — Carolyn and Philippe from Montreal — in a patois of pantomime, our fractured French and their more evolved English.

As the train rolled across the countryside, an iPad propped up on a stand at each table gave details of our passage past landmarks like Ile d’Orleans, the “garden island” where much of the produce is grown for the restaurants of Quebec City, and Cap Tourmente National Wildlife Area, home to some 320 bird species. We enjoyed glimpses of multicolored birds fluttering through the trees.

Later, the tracks would wind through small villages, including Baie-Saint-Paul, filled with art galleries, boutiques and specialty shops. Near the end of the threeand-a-half hour trip, just before reaching scenic La Malbaie, we passed through Saint-Joseph-de-la-Rive and got our first sense of Charlevoix’s unique landscape of valleys and mountains, including the ski area at Le Massif de Charlevoix. A UNESCO World Biosphere Reserve, much of the Charlevoix region nestles in a crater formed by the impact of an enormous asteroid some 350 million years ago.

But first we turned our attention to drinks and lunch as we chugged along, quickly learning why our journey was touted as a rail cruise. Waves from the St. Lawrence River lapped so close to the tracks that we often seemed to be skimming across the water. A far cry from a plastic-wrapped cafe-car lunch, ours was a classy three-course affair planned and prepped by Jean-Michel Breton, executive chef at Charlevoix’s Fairmont Le Manoir Richelieu hotel. Sous chefs aboard the train do the final cooking. Dishes including spice-encrusted salmon, asparagus crepes, and decadent chocolate desserts are prepared almost entirely with local ingredients.

As of February some trips on the innovative tourist train — launched in September — stop at the Massif of Charlevoix, adding a new chapter to the area’s history as a four-season destination with something for everyone. Day trippers can now easily ski or explore this region that has long attracted art lovers, wellheeled visitors to the Charlevoix Casino and luxurious Le Manoir Richelieu, as well as in-the-know hikers, outdoor enthusiasts and foodies.

Ah, the food. It was too early for skiing on our trip, so we opted to explore the region’s culinary heritage. The train lunch was just a taste of what lay ahead. A strong field-tofork and vine-to-wine mentality permeates the area, with chefs working closely with local producers and building their menus around whatever is in season. Chef Breton at Le Manoir Richelieu, like many of his culinary colleagues, buys as much of his meat, fish, and produce as possible from local producers along a stretch of culinary nirvana known as Charlevoix’s Route des Saveurs, or Flavor Trail.

I had arranged in advance to take a cooking lesson with chef Breton. Cooking classes and chefs’ tables, where diners pull up chairs to eat in the kitchen, are just two of the ways in which the Charlevoix region links food-obsessed consumers with growers, producers and chefs. After the class, during which chef Breton demonstrated his expertise with a carving knife and a culinary blowtorch while preparing foie gras, I took a quick peek at the vast kitchens where total order reigned despite the fact that every chef and waiter was in perpetual motion.

Then it was on to Le Charlevoix, the Fairmont dining room, for dinner. I started with an appetizer of lightly dressed lobster, mango and rocket greens. An earthy soup of root vegetables followed. Fish is usually the test of a deft hand in the kitchen and my filets of sole — moist, flaky, removed from the heat at exactly the right moment — did not disappoint, nor did the silken creme brulee that followed.

Over the next two days we set out to explore Charlevoix’s many attractions, including some of the 23 growers and producers and 15 inns and hotels extending from the villages of Petite-Riviere-Saint-Francois to Saint Simeon on the Route des Saveurs. As well as supplying local restaurants, many trail members provide interactive visits and tastings of local fare to travelers.

Among our favorites were the cheeses at La Maison Maurice Dufour in Baie-Saint-Paul, especially their buttery, award-winning Migneron.

In the same village we sampled an unusual — perhaps even unique — aperitif wine called Omerto being produced at Le Domaine de la Vallee du Bras using an old family recipe and organic heirloom tomatoes. I admit to being skeptical about wine made from produce that I usually toss into a salad, but there was just the faintest whisper of tomato essence in the balanced, full-bodied wine that pairs well with the local specialties of foie gras, smoked salmon and dark chocolates.

The name Omerto is a play on the name Omer, greatgrandfather of present owner, Pascal Miche, who began producing tomato wine for personal use many decades ago, and “omerta” — Italian for “code of silence” — because the wine was unknown outside the family for decades.

Such innovation is the norm throughout funky Baie-Saint-Paul. Streets are lined with art galleries, and tiny shops offer everything from bright pottery to hand-painted scarves.

The next stop, in the village of Les Eboulements, was a honey, or would have been if a downpour hadn’t rendered the bees at La Miellerie de Charlevoix inactive and made a visit to the hives impractical. Nonetheless, we enjoyed learning about the honey-making process from Jean Philippe Dery and sampling his blueberry and wildflower honeys. In better weather, visitors can see the bees up close and personal while suited up in a protective veil, gloves and boots.

With fresh fruits and vegetables, specialty cheeses, organically raised lamb and other meats, and a variety of foods close at hand, it’s no surprise that excellent restaurants also lie along the Flavor Route. In Baie-Saint-Paul we stopped for lunch at L’Orange Bistro where Migneron cheese and fresh mushroom gravy raised Quebec’s homey, ubiquitous poutine (French fries, cheese and gravy) to new heights, while beef, veal and sausage from local farms appeared with creative sauces. At another lunch, at Chez Truchon in La Malbaie, local rabbit, cheese and foie gras starred.

On our final night we began dinner at Auberge des 3 Canards in La Malbaie by toasting thick slabs of homemade bread in the gas fireplace — entirely optional, but fun on a blustery evening and reminiscent of restaurants we’ve enjoyed in the Swiss Alps and in rural France. A sensational soup of mussels and cream, followed by local lamb, sent us happily into the chilly night.

Fortunately, walking beside the St. Lawrence, hiking forest trails, and meandering through scenic villages and charming art galleries and museums burned up most of the calories. Of course, the trip wasn’t over yet. All too soon it was time to make tracks back to the train station in La Malbaie and enjoy the train ride back to Quebec City — and a four-course dinner along the way.