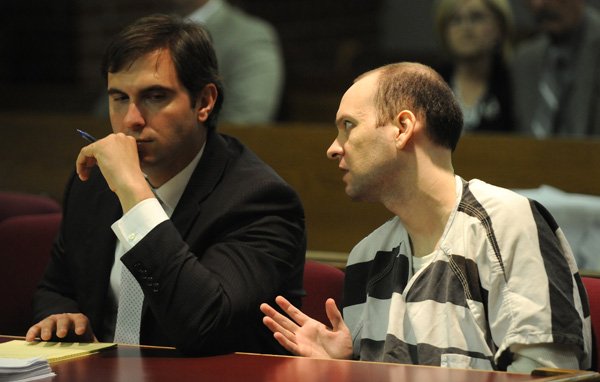 Zachariah Scott Marcyniuk, right, speaks with Toney Brasuell, one of his legal team, on Wednesday in Judge William Storey’s courtroom in Fayetteville. Marcyniuk is appealing his conviction of breaking into the home of Kate Wood and murdering her in 2008.

FAYETTEVILLE — Convicted killer Zachariah Marcyniuk challenged in court Wednesday the effectiveness of legal representation he got in a 2008 trial that sent him to death row.

Marcyniuk, represented by a new attorney, challenged the work of attorney W.H. Taylor of Fayetteville, who testified for more than four hours. Taylor said Marcyniuk refused to accept a plea agreement that would have put in prison for life and spared him the death penalty.

“He wanted to get on the stand and tell his story and he thought the jury would believe him,” Taylor said.

Marcyniuk, 32, was sentenced to die by lethal injection for the murder of his ex-girlfriend, Katie Wood, in 2008.

In the first day of a scheduled two-day hearing, Marcyniuk’s attorney, William James of Little Rock, argued his client deserves a new trial or at least to have his death sentence vacated because Taylor failed to ask prospective jurors whether they would automatically vote to impose the death penalty upon a conviction, regardless of the circumstances.

James was appointed by the state’s Public Defender’s Commission.

James also argued Taylor failed to call witnesses, including friends and a former girlfriend, who may have provided evidence to back up defense claims Marcyniuk suffered from a mental disease or defect.

In his testimony, Taylor said all the evidence he had to work with in trial linked Marcyniuk to Wood’s murder, leaving him only the option to rely on a mental defect defense. That prevented him from calling witnesses, such as Marcyniuk’s friends, who would have testified he acted normally at times.

Calling other witnesses such as Marcyniuk’s ex-girlfriend would have opened the door for other unflattering evidence, including the fact she had sought three protection orders against him, Taylor said.

Marcyniuk’s courtroom behavior in his trial also complicated his defense. He continually rocked back and forth throughout the three-day trial. During another hearing, Marcyniuk had to be escorted from the courtroom by sheriff’s deputies.

“He started acting out in front of the jury to the point it was almost unbelievable,” Taylor said.

Marcyniuk listened quietly to testimony Wednesday and had no outbursts.

Taylor said he could not recall why he wanted some jurors to be on the panel and asked that others be excused during jury selection. The 30-page questionnaires that jurors filled out were destroyed following the trial.

Also testifying Wednesday was Chris Adams, a South Carolina attorney and expert in capital murder cases. Adams said after reviewing Marcyniuk’s case, he found that it may not have been made clear to jurors they could have spared Marcyniuk’s life after they convicted him of capital murder.

Wood was a 24-year-old University of Arkansas student in 2008 when she broke up with Marcyniuk.

According to testimony in his trial, Marcyniuk broke into Wood’s Fayetteville apartment in the early hours of March 9, 2008, and waited for her. Wood was attacked when she opened her front door.

He reportedly dragged Wood inside her apartment and stabbed her to death. He left Wood’s body in the bathtub and fled. He was arrested in Oklahoma about six hours later.

Marcyniuk’s murder conviction and resulting death sentence were upheld by the Arkansas Supreme Court in May 2010. Justices said there was ample evidence for a jury to believe Marcyniuk acted deliberately and with premeditation.