Families find museum has art that appeals to all 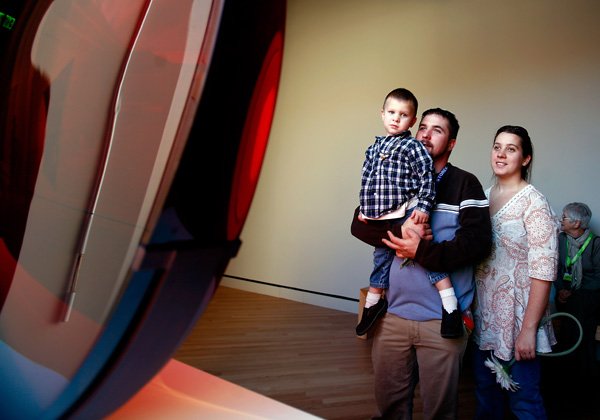 BENTONVILLE — Patrick Conley considers himself a lucky man to be living 2 miles away from top class art and culture.

“When you can walk to a place and see pieces of art you see in art books and othermuseums, that just sends a tingle down your spine,” said Conley, a lawyer who lives in Bentonville near Crystal Bridges Museum of American Art.

Conley said his family moved from Knoxville, Tenn., to Bentonville in 2005. “We had no idea that we weremoving to a place with high culture,” he said.

Conley and his family toured Crystal Bridges on Friday, the first day the museum was open to the public.

“We’re so excited,” said his wife, Heather Conley. “We’ve been waiting for it to open for years.”

Patrick Conley was most impressed with Gilbert Stuart’s 1797 portrait of George Washington.

“My favorite was the trumpet thing that comes out of the ear,” Liam said. “I yelled in it, and it made music.”

John Baldessari’s sculpture called Beethoven’s Trumpet (With Ear) Opus No. 132 Reverse is the only exhibit in the gallery that produces sound, according to a small sign by the giant ear trumpet. The2007 work is about 9 feet long and 6 feet tall.

After a couple of hours, the children were getting restless, so the Conley’s took a break at the Experience Art Studio, which has games andeducational tools for kids. After that, they explored more galleries.

The children were taken with After the Last Supper by Devorah Sperber. The lifesized rendering of Leonardo da Vinci’s The Last Supper is made with 20,736 spools of thread and is 29 feet wide. When viewed through a clear acrylic sphere on a metal stand, the seemingly abstract, upside-down image becomes clear and right-side-up. It is at Crystal Bridges temporarily as part of a traveling exhibit.

Most kids stopped immediately when they saw Nam June Paik’s John Cage Robot II in the Wonder World gallery. The 1995 sculpture consists of 11 flickering television sets that together depict a 9-foottall figure with arms, legs and a head.

After studying it for a moment, Liam said, “I like the design around it.”

He was referring to mixed media attached to the front of the wooden television sets, which included three items from pianos: keys, hammers and string.

Artist Diane Morrow of Fayetteville viewed John Cage Robot II from the back of the crowd.

“It is art,” she said, in response to an interview question. “It’s not the kind I like, but it is clever.”

Morrow was drawn more to the early American and 19th century paintings.

“I expected something a lot smaller,” she said. “We expected a handful of quality pieces with lesser known works flushing it out. But I was amazed. There were so many well-known artists there.”

She was touring Crystal Bridges on Friday with her husband, Tommy, son Max, 11, and daughter-in-law Emily, 18.

“We’ve been to a lot of museums, and this is definitely a destination for people to come and see,” she said.

Prior to Friday’s grandopening, Morrow and her husband would drive to Bentonville and walk the trail, just to see how construction was progressing.

“I guess I didn’t expect such a large body of work there,” she said. “I thought it would be a small, nice museum, but this is really a good sampling of American art. ... I want to go back. I’ve already promised relatives I’m taking them there.”

Max Morrow was taciturn when asked his opinion several times during an interview on Friday.

Crystal Bridges has a few nude sculptures, including Henry Kirke Brown’s The Choosing of the Arrow, (1849), Frederick William MacMonnies’ Diana (1890) and Harriet Whitney Frishmuth’s The Bubble (1928).

“I tried to explain to him how the artist was just studying the form of the body,” Diane Morrow said.

When asked what his favorite piece of art was at the museum, Max described Arthur Fitzwilliam Tait’s The Life of a Hunter: A Tight Fix. The 1856 painting depicts a hunter with a knife trying to fend off a bear. Another hunter, in the background, is aiming his gun at the bear.

“The kids kind of wore out by the end,” Diane Morrow said.

Print Headline: Families find museum has art that appeals to all