The state Highway and Transportation Department awarded a $19.85 million contract to APAC-Central of Fayetteville to build a section of roadway around the Benton County community of Hiwasse, said Randy Ort, department spokesman.

The three-mile section of roadway will begin on Arkansas 72 just east of Hiwasse and take traffic from around the community to the south and west before linking up with Arkansas 72 again, Ort said.

Ort said the project is what’s referred to as a “turnkey job” meaning the contractor will do all of the work needed for the project to open. The contractor is on site, Ort said Friday, and work is scheduled for completion by April 11, 2014. 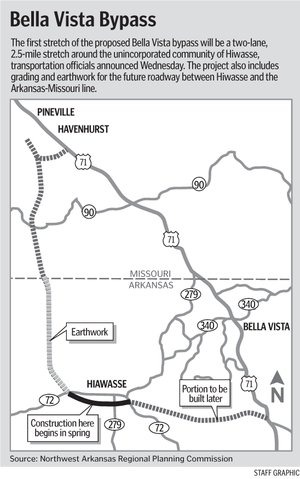 Bella Vista Bypass
AT A GLANCE

The three-mile stretch of roadway being built around the Benton County community of Hiwasse will be constructed as a controlled-access highway with no driveways or stop signs and interchanges on both ends of the project. While only two lanes of the roadway will be paved initially, the project is designed for eventual expansion into an interstate highway level road.

The contractor will do the grading and build the structures needed to open the roadway. While the current job calls for two lanes of traffic, interchanges, bridges and drainage structures will be built to handle the needs of a four-lane interstate highway, Ort said. Another section of similar two-lane highway is planned to carry this project to the Arkansas-Missouri state line, Ort said.

Eventually, Ort said, the section of two-lane road will be upgraded and linked to interstate highway level roads in Arkansas and Missouri.

State Rep. Uvalde Lindsey, D-Fayetteville, was involved in the Northwest Arkansas Council at its inception. Lindsey said building an interstate highway link through Northwest Arkansas was among the first goals of the group, even though it was acknowledged the work would be done piecemeal and over time. Lindsey said the initial effort was to connect the area to Interstate 40. Interstate 540 accomplished that goal, he said, “but that’s where the money ran out, so to speak.”

Lindsey said further highway development in the area is one part of the effort to promote the region’s continuing economic development.

“These improvements will make it easier on the 20,000-plus people who drive to work in our city every day,” McCaslin said. “It’s just the natural evolution of seeing what were some smaller towns in Arkansas go through some explosive growth.”

McCaslin said the Bella Vista bypass project is just the newest piece “in a very large puzzle” that may ultimately see Interstate 49 span the county from the Canadian border to Mexico. In Arkansas, he said, the Bella Vista bypass will be the northernmost part of that highway, which is projected to replace U.S. 71 along the state’s western edge.

McCaslin said he is sure growth will follow the path of the new highway.

“I don’t want to make any predictions, but history would certainly bear that out,” he said.