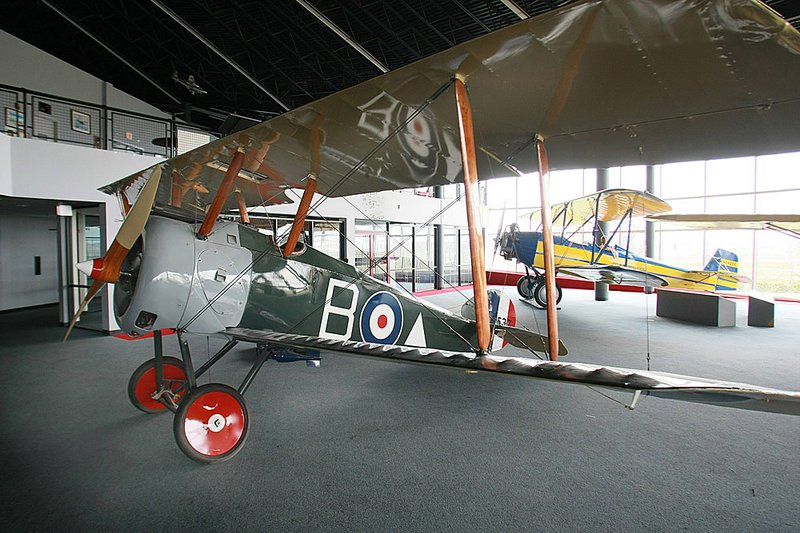 A Sopwith Camel (foreground), one of only seven left in the world, sits Tuesday in the closed Aerospace Education Center in Little Rock, along with a Command-Aire made in Little Rock about 1929.

LITTLE ROCK — The demise this year of Little Rock’s Aerospace Education Center also closed a chapter for a pair of rare old airplanes that are now headed into the wide blue yonder.

One of them - a Sopwith Camel - is a World War I fighter, the only one of its kind left in the United States. The other is a Curtiss Jenny, a military bi-wing trainer that became a staple on the barnstorming circuit and helped popularize aviation after World War I.

The Jenny is already gone - crated and shipped to Argentina to be restored to flying condition, Dick Holbert, who brought both aircraft to Arkansas, said Tuesday. It will eventually end up at an aircraft museum in Virginia Beach, Va., he said.

The Sopwith Camel, the plane the Peanuts comics strip character Snoopy pretended to fly against the Red Baron, has a much longer journey ahead. It is to be dismantled as soon as next week, crated and shipped to an aircraft museum in New Zealand. It is one of only seven such planes left in the world.

Hundreds of thousands of visitors passed by the vintage planes during visits at the Little Rock center.

Holbert, president of Central Flying Service in Little Rock, acquired the two aircraft in 1981 from a Florida museum that was closing and auctioning off its collection. He envisioned the planes one day being a fixture in a Little Rock area aircraft museum, long the goal of the Arkansas Aviation Historical Society, which Holbert helped found.The society operated the Aerospace Education Center, which saw its last visitor Jan. 1 when it closed for good because it was losing money.

Holbert donated the airplanes to the society, which decided to sell them to pay down the center’s outstanding bills. The museum idea is no more.

The Sopwith Camel was reported to be worth $1.75 million when Holbert donated it to the center in 1999. On Tuesday, he declined to disclose the sale price for it and the Jenny.

The loss of the Jenny and the looming loss of the Sopwith Camel are difficult for the few remaining center staff members to see.

“It was very sad when they made the decision to close the center,” said Ann Jones, the center’s director. “It’s also sad to see the aircraft leave.We’ve become attached to them. We want them to have a good home.”

An effort is under way to keep in Arkansas a third vintage aircraft that was a fixture at the center. The 1929 Command-Aire was built by a Little Rock-based company.

Bobby Roberts, executive director of the Central Arkansas Library System, is leading a group to raise money to buy the plane and put it on display at the Arkansas Studies Institute in downtown Little Rock.

“It just hate to see it get away,” Roberts said. “There are only eight or nine left in the world.”

He might try to arrange for the library system’s endowment to purchase it until private money can be raised, he said. If the money couldn’t be raised in 12 months, the aircraft would be sold, hopefully, to someone in Arkansas, Roberts said.

“Libraries don’t normally buy airplanes,” he said. “But it’s a shame to see it go.”