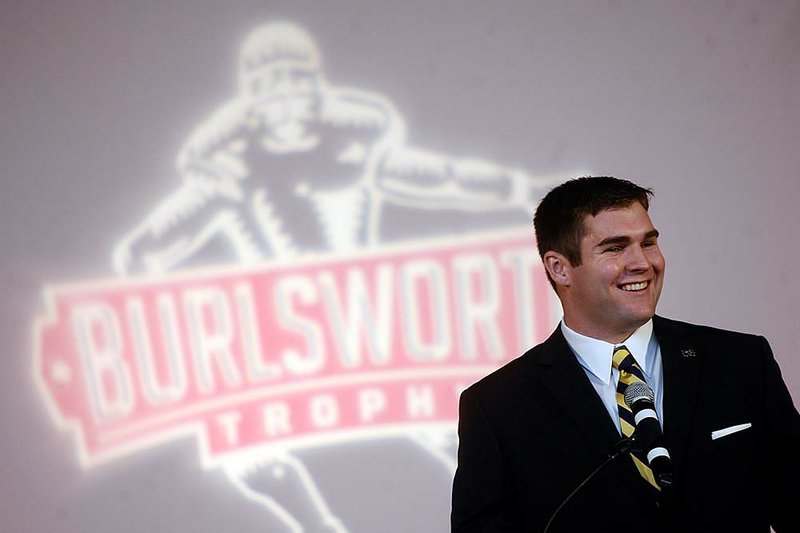 SPRINGDALE — A year ago, Sean Bedford didn’t know who Brandon Burlsworth was. But on Monday, Bedford was honored to be mentioned in the same breath as the former Arkansas All-American lineman.

Bedford, a former Georgia Tech center, received the inaugural Brandon Burlsworth Trophy as the nation’s top player who was a former walk-on. Bedford accepted the trophy Monday at the Northwest Arkansas Convention Center.

“What I love about this award is it goes to honor the people who get overlooked, who work so hard, often in obscurity,” Bedford said. “I’m incredibly blessed to be the inaugural recipient and to be mentioned as part of Mr. Burlsworth’s legacy.”

The trophy memorializes Burlsworth, who started his Arkansas career as a walk-on offensive lineman from Harrison. He was a third-round draft choice by the Indianapolis Colts in 1999 but died in a car accident 11 days later.

Bedford, 6-1, 281 pounds, was one of 47 nominees for the award, which is based primarily on on-field performance. A seven-man selection committee, which included former Arkansas coaches Frank Broyles, Ken Hatfield and Danny Ford, who coached Burlsworth for four seasons, chose Bedford from among five finalists.

“It’s incredible,” said Marty Burlsworth, Brandon’s older brother and a member of the Burlsworth Foundation. “Brandon would be proud and very humbled. He would want to know what all the fuss was about.”

Bedford’s story was similar to Burlsworth’s. After a standout career as a defensive lineman at Gainesville (Fla.) Buchholz, Bedford had zero scholarship offers from Division I schools, so he decided to walk on at Georgia Tech.

Bedford, who scored a 1,520 on his SAT, hoped to eventually earn some playing time, maybe even a scholarship, while he pursued a degree in aerospace engineering. That hope seemed dim when he was little more than a scout team defensive lineman with consecutive knee injuries during his first two years with the Yellow Jackets.

Then Paul Johnson left Navy to take the Georgia Tech job in 2008. After an August practice, Johnson pulled Bedford aside and asked him if he had ever played on the offensive line. Bedford had briefly played on offense as a freshman in high school.

“I was a glorified blocking dummy,” Bedford said. “He told me he was very impressed with me, the amount of effort I had put in. He said, ‘You’re not going to play much on the defensive line. Why don’t you take a shot at beating out someone on the offensive line?’ ”

Bedford was a reserve as a third-year sophomore, playing in two games, but won a starting position and a scholarship before his junior year. He was named All-ACC as a junior and senior and helped the Yellow Jackets lead the nation in rushing yards in 2010.

“Never in my wildest dreams would it have worked out the way it did,” Bedford said. “As a competitor, you always expect you’ll be able to achieve some success. That said, I never saw this coming.”