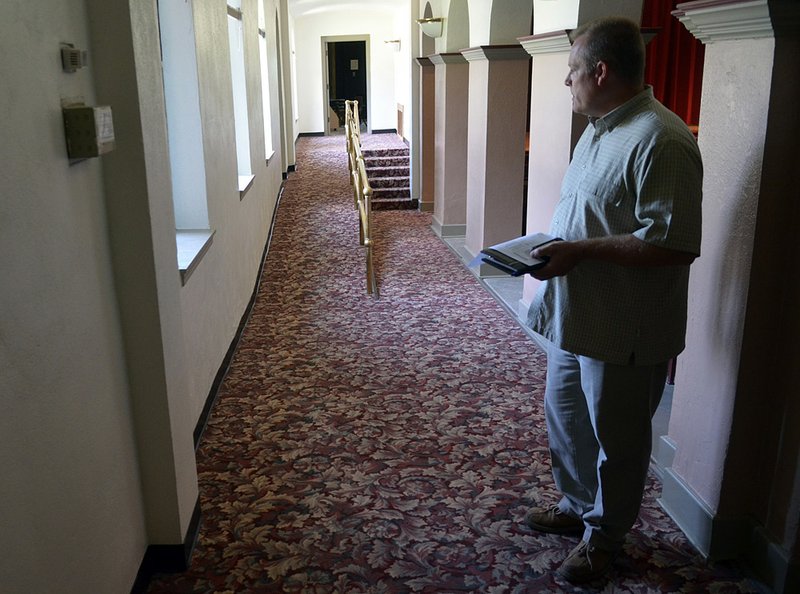 Paul Wallace, facilities manager, shows an area in the auditorium at Old High Middle School in Bentonville that had to be repaired due to flood damage.

With designs in place, construction crews have cleared sites for new schools across Northwest Arkansas that will begin opening in 2012.

The new projects are progressing after voters agreed in 2010 to pay higher tax rates in the Bentonville, Eureka Springs, Fayetteville and Lincoln schools districts.

At the Lincoln Consolidated School District in Washington County, with 1,350 students, a new two-story high school, due to finish in August 2012, will provide a new landmark for Lincoln’s east entrance off U.S. 62.

“The whole community is excited about a new high school and the opportunity that’s going to give our students,” Superintendent Frank Holman said. “They ask [about it] quite often.”

Construction crews have compacted the soil and leveled grounds, and the foundation should be poured within the next several weeks, Holman said. The projected cost for the high school and an athletic complex is $16.2 million, with $1.6 million going toward the athletic complex, he said. To date, the district has spent about $500,000 on the project.

A property tax increase of 2.9 mills generates $69,000 ayear to pay for $9.2 million in bonds; a state facilities partnership program for schools provided another $5.3 million, Holman said.

A mill is one-tenth of a cent, generating $1 of property taxes for every $1,000 of assessed value. A county assesses property at 20 percent of its appraised value, and the assessment is multiplied by the millage rate to determine the taxes owed.

The district has saved the remainder needed for the project in a building fund.

Like districts across the state, Lincoln took advantage of stimulus bonds that allowed the district to borrow money at no interest, school board President Richard Watson said. Lincoln’s elementary classes have grown from 80 to 90 students in a grade to 120 to 130 students in a grade with no sign of tapering off, and those students will reach the middle school in a year, he said.

“This was just an absolute necessity,” he said. “We are growing.”

In Bentonville, a district of more than 14,000 students, a $600,000 renovation of Old High Middle School near the city center has provided new sidewalks and will protect the campus from flooding.

“We’re already crowded at the seams at all of our facilities,” said Paul Wallace, Bentonville’s facilities director. “Just trying to keep them up to the highest standard.”

About five miles south, off of Bright Road and Gator Boulevard, what will be a new kindergarten through sixth-grade campus now is a large expanse of reddish orange dirt, dotted by heavy equipment, trucks and construction crews. Crews there have started building the first vertical concrete block walls that will become the gymnasium on the northeast side of the campus, assistantconstruction superintendent Erick Roberts said. The $28.6 million campus is expected to open in 2012.

The new school, along with a junior high planned for 2013, will help relieve overcrowding that has occurred with Bentonville’s growth, said Brad Reed, district director of student services. At the kindergarten through eighth grade levels, where grade levels have surpassed 1,000 students, the district’s campuses are at or above capacity, he said.

The projects are among $64.77 million in bond projects the district planned with a 3.6-mill increase in 2010, said Sterling Ming, executive director of finance for Bentonville School District. As ofJune 30, the district had sold $39.77 million in bonds and spent $4.9 million of the proceeds, with about half going toward the new campus.

The proceeds also provided for $5.73 million for upgrades to other district campuses, including a $265,000 access control system that allows entry to buildings with a card, $135,000 in roof repairs and for renovations, such as at Old High.

During heavy rain, water would seep through exterior bricks at Old High, the district’s oldest campus where part of the building dates to 1928, Wallace said. At times, the water would rise as high as a foot and a half deep inside the auditorium. With the bond money, the district hired crews to lower the grounds outside the campus to divert water away from the building and installed French drains and waterproofbricks.

Most of the money for the seventh- and eighth-grade campus, planned to open in 2013, will come from the final bond sale, planned for April 2012, Ming said.

In Fayetteville, a district of 8,800 students, most of the construction activity visible on the Fayetteville High campus is part of the first phase of the transformation, which the district is paying out of its operating budget, said Lisa Morstad, the district’s chief financial officer. The cost of the project is $95 million, with about $45 million for the first phase and about $50 million for the second phase.

A 2.75-mill increase voters approved in September will generate the revenue to repay the bonds issued for the second phase, Morstad said. This year - 2011 - is the first year for the higher tax rate to affect property tax bills, she said.

As of April 30, the latest figures available from the district, Fayetteville Public Schools has spent $6.6 million on the project, all related to the first phase, Morstad said.

The first phase consists of changes to the southeast, southwest and northwest corners of the campus. About 30 percent of the construction is complete on the first phase, Jones said.

Concrete block walls have risen on the southeast corner of the Fayetteville High School site, where a new building will house a performance arts center with a stage, rehearsal spaces for music programs, a kitchen and a student commons area. Crews are preparing a pad for the student commons.

On the southwest corner, workers have built a temporary retaining wall to help with the second phase of the project and a permanent concrete retaining wall. They are pouring footings for that building and “roughing in” the plumbing, Jones said. The structure will take shape through the fall, he said.

What may not be as obvious at the Fayetteville site are the retaining walls needed to hold back dirt and an underground storm water retention system, Jones said. The project also required extensive work to prepare the site, he said. Crews excavated 34,000 tons of sandstone and limestone.

The design of the second phase of Fayetteville High School is about 60 percent complete, and work on the northeast corner of the campus will begin in the spring, Jones said.

“Phase Two addresses the existing buildings that are on the north side of the campus and especially that northeast building,” Jones said. “There’ll be a lot of activity in that area for at least two more years.”

And in Eureka Springs, construction began in June on a new high school campus. Revenue for the $10.7 million construction project comes from a bond issue, which the district is repaying with a 1.98-mill increase approved by voters last year, and another bond the district refinanced to expire in 2031 instead of 2016, Superintendent WayneCarr said. The district has another $550,000 set aside to pay for furnishings.

This will be the last year for high school students to attend classes in the 60-yearold campus in the Eureka Springs historic district. Next year, they will go to class at the new campus, where the district’s other campuses are located on Lake Lucern Road. About 650 students are enrolled in kindergarten through 12th grade.

The new building will include a small auditorium, larger labs and will be wired for technology, he said. Expenses, so far, amount to a little more than $1 million for architectural design and development of the project, land surveys, soils testing, site preparation, insurance, bonds for the project, permits and cost estimating.