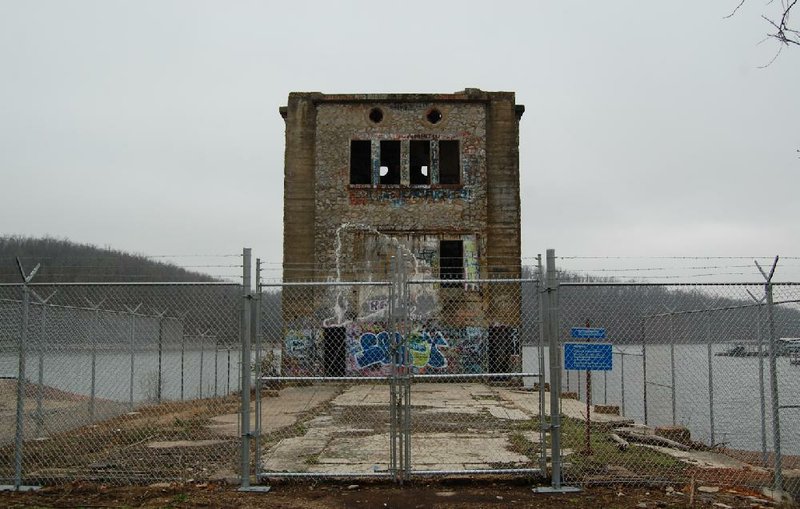 The U.S. Army Corps of Engineers wants to preserve the ruins of Monte Ne — William Hope “Coin” Harvey’s 1920s resort that is mostly under the waters of Beaver Lake. The Corps says Oklahoma Row, an old hotel building on dry land at the site, has become a place for underage drinking and illicit activities.

ROGERS — The U.S. Army Corps of Engineers is looking for partners willing to spend about $122,000 to restore the ruins of Monte Ne, which was Arkansas’ third most popular resort town a century ago.

If no partners are found within the next couple of months, the Corps will consider tearing down the largest remnant of the ghost resort, a three-story “tower” that was part of a 1910 hotel calledOklahoma Row.

In an initial preservation plan developed by the Corps in June, demolition is listed as the cheaper alternative to preserving the decaying concrete tower, which is on the National Register of Historic Places. It would cost about $55,000 to remove the tower.

Demolition will be the last resort, said Chris Page, an archeologist with the Corps’ Little Rock district.

“We might not demolish it, but the option of preserving it would be off the table,”he said, if no partner is found for the project. “We would have to seriously consider demolishing it. ... It may stand there for a few months or a year while we decide what to do. At this point, all the options are on the table and everything in between.”

The property became the Corps’ after the White River was dammed to create Beaver Lake in the mid-1960s, leaving much of the resort and original town of Monte Ne underneath the lake.

The history of Monte Ne centers on William Hope “Coin” Harvey, who was one of the best-known and most influential people in the United States in the 1890s. The resort thrived until the advent of the automobile, which encouraged people to spend more time on the road and less time at a single location.

Beaver Lake has lapped at the tower, eroding its foundation and creating the possibility of a collapse, according to the initial preservation plan. The tower is on the edge of the lake, about three miles east of Rogers, near the spot where Arkansas 94 Spur dead ends into the water.

Gaye Bland, director of the Rogers Historical Museum, said some of the walls in the tower’s cellar, which is usually full of water, have started to collapse. The foundation has been undermined as a result, she said.

Bland said the ruins are significant from a historical, archeological and tourism perspective. The tower, which housed hotel rooms, is the only physical structure from the resort remaining above ground or water besides the chimney at Missouri Row, another hotel at Monte Ne. The tower is also an early example of reinforced concrete construction, she said.

“So it has some architectural significance, too,” she said. “I think all of that together makes it worthy of preservation.”

The Corps wants to know by mid-February if it has a partner in the restoration project so it can relay that information to its Center of Expertise for the Preservation of Historic Buildings and Structures, which is based in Seattle.

The Corps plans to spend $86,130 for the national preservation experts to study the situation. Before they do, it would be helpful to know if they’re looking at the project as a restoration, demolition or something else, Page said. Preservationists from the center might come up with a better plan, he said.

For decades, the Oklahoma Row tower has served as a place for illicit activities, according to the initial preservation plan.

On March 16, a man got stuck in the tower’s chimney, and emergency personnel had to rescue him. The Corps became more concerned about the site being a safety hazard over the ensuing months.

“During the summer we had all sorts of incidents of people jumping off of it and doing all sorts of crazy things,” said Page.

“They would jump off the building into the water,” said Bland. “It’s just accident after accident waiting to happen. ... We can’t keep going on the way we’ve been going. We just need some time to come up with a viable plan.”

Monte Ne isn’t an incorporated city, so there are no local police to monitor activities at the ruins.

“It’s sort of a no-man’s land,” said Allyn Lord, director of the Shiloh Museum of Ozark History in Springdale, who compiled a book of photographs called Historic Monte Ne as part of Arcadia Publishing’s Images of America series.

In October, the Corps put an 8-foot-tall chain-link fence around the tower with barbed wire along the top to discourage climbers.

“We needed to put up something to protect the area as it is now,” Page said. The fence will be removed after the renovation.

The Corps also put a buoy line in the water to keep boats at least 50 feet from the site.

The Corps has spent about $32,143 to clean up the site and prepare it for restoration. Corps officials hope removing underbrush will make the area more visible from the highway and help deter illegal activities there.

After the study is completed, implementation of the final preservation plan likely would include removing graffiti, stabilizing the structure, sealing the building with a door and possibly windows, constructing trails and putting up interpretive signs. The restoration also would include the foundation and chimney of Missouri Row.

“This is preservation of existing ruins,” Page said. “We’re just stabilizing what’s already there. This is not the structure as it was in its heyday.”

Restoring the ruins will deter further vandalism, Page said. Vandalism is more likely to occur if the propertyseems to be abandoned - if nobody cares about it.

“We believe that if you do make it a nice park and invite more people to come during the day and use it as a legitimate facility ... that should curb most of that [illicit] activity,” Page said.

The Corps, Benton County and the city of Rogers led a past effort to preserve Monte Ne.

The Arkansas Humanities Council denied a grant application for signage at Monte Ne in 1998, Lord said.

“The answer was, I’ll paraphrase, ‘It’s not a significant place,’” remembers Lord, who was assistant director at the Rogers Historical Museum at the time. “‘Not significant’ is the term I remember.”

“We think we can raise the money,” she said. “The main thing is the sustainability of the site. Once it gets preserved, how is it going to be maintained?”

It would cost about $7,000 per year to maintain the site, Page said.

A public meeting was held in Rogers on Nov. 15 to get input on plans for Monte Ne, Page said, and another one will be held before a final preservation plan is adopted.

Lord believes Monte Ne is well worth the investment because of Coin Harvey’s significance in American history.

Monte Ne’s developer was a lawyer and promoter from West Virginia who gained nationwide fame in 1894 when he wrote an economics book titled Coin’s Financial School. It was one of the five bestselling books of the 19th century, Lord said.

Harvey’s fame and opinions about the national economy made him a prominent figure in the 1896 campaign of William Jennings Bryan, the Democratic contender for president. After William McKinley defeated Bryan, a disillusioned Harvey decided he needed a change, and he bought more than 300 acres in Northwest Arkansas to build a resort.

The resort catered to the lingering travelers of the day who journeyed by train to Monte Ne, where they were then transported by Italian gondola across a lagoon to one of the hotels.

Lord said Monte Ne was Arkansas’ third most-visited resort from 1900 to 1920, behind Hot Springs and Eureka Springs. Harvey’s resort had the state’s first indoor swimming pool in 1901 and one of the state’s first bowling alleys that same year, she said. By 1909, Monte Ne had Northwest Arkansas’ first golf course.

The resort featured a 100-foot-long stone-and-cement aqueduct built in 1904 and an electric light plant that illuminated the hotels by 1910, earlier than many local cities.

Harvey eventually ran for president himself in 1932 as the nominee of the Liberty Party, formed by delegates meeting at his amphitheater. The 80-year-old Harvey received only 53,000 votes as the nation elected Franklin Delano Roosevelt for the first time.

Harvey died in 1936, having exhausted his fortune on his ventures.