FAYETTEVILLE OUTPACED BY PULASKI ACADEMY IN SCRIMMAGE by Vernon Tarver | August 23, 2011 at 5:39 a.m. 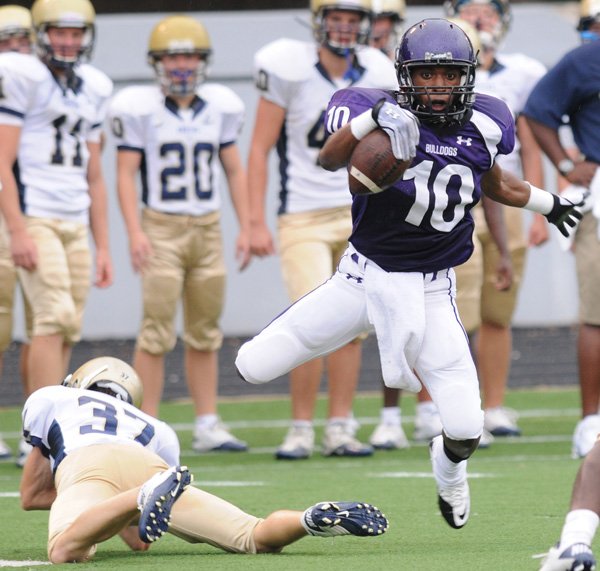 Fayetteville’s Casey Perry looks for running room during a scrimmage against Pulaski Academy on Monday.

FAYETTEVILLE — The regular season hasn’t even begun, but Fayetteville may have alreadyfaced its toughest opponent.

The Bulldogs hosted Class 4A Pulaski Academy onMonday in a preseason scrimmage at Harmon Field. And all night long it was clear why the Bruins are expected to be one of the top teams in the state this season, particularly on off ense.

During the varsity scrimmage - held in the first, second and fourth quarters - Pulaski Academy outscored Fayetteville 56-42. Quarterback Fredi Knighton threw for more than 364 yards and fi ve touchdowns and ran for 82 yards and another touchdown and the Bruins never let the Bulldogs get closer thana touchdown after building an early 28-7 lead.

“They hurt us with some blown coverages, but when you have a quarterback who can make plays like Knighton, it’s tough. I don’t think we will see a quarterback as dangerous all year long with his feet and arm than Knighton.”

Fayetteville didn’t expect to play Pulaski Academy when original preseason plans were put together. But when a date with Pea Ridge fell through, the Bulldogs stepped up their opponent in a big way.

Defensive coordinator Brian Early is glad they did.

“When coach Patton asked if we wanted to play this scrimmage, we all knew we would be tested,” Early said. “But I’d rather find out things about ourselves now as opposed to infour weeks when it counts.

“So it’s kind of like you take the car for a test run. You fi nd out what your strengths and weaknesses are and you get back in the video room and clean some things up and learn from it.”

Not all was bad for Fayetteville. Despite allowing 56 points and more than 530 yards of total offense in three varsity quarters, the Bulldogs offense was almost as eff ective.

Junior quarterback Austin Allen completed 26 of 48 passes for 441 yards with five touchdowns and two interceptions, both on tipped passes. Allen, the younger brother of former all-state quarterback Brandon Allen, was making his fi rst start in a live-game situation for the Bulldogs.

“I was pleased with Austin. I thought he made some big time throws,” Patton said. “We dropped some passes, but forthe most part I was pleased.

“But we have got to find a running game.”

Fayetteville rushed for 90 yards in the three varsity quarters, but 79 came from Allen on seven carries.

Tailback Brice Gahagans was limited to nine yards on nine carries, while Braydon Cook had two yards on two carries.

Bruins coach Kevin Kelley believes, despite any mediocre ground game or young defense, that Fayetteville will be dangerous as the season wears on.

“We know teams in Northwest Arkansas are going to be really good and I think Fayetteville is right there,” Kelley said. “At the end of the year, it’s Bentonville, Springdale Har-Ber, them and Cabot. So when the opportunity arose to play one of the best teams in the state and one of the best coached teams, that’s where you’re going to see where you are.”