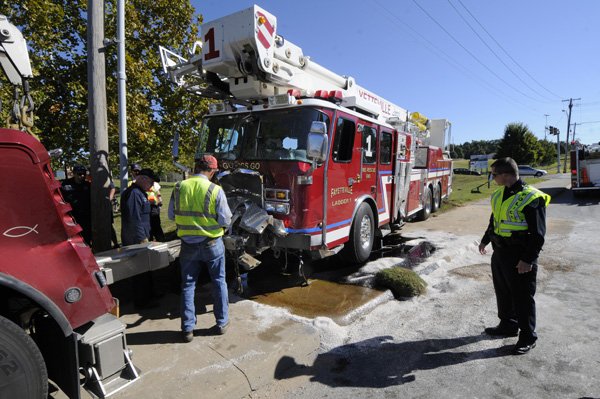 Fayetteville emergency personnel prepare to tow Fayetteville Fire Department’s Ladder-1 truck Monday. Four crew members in the truck were responding to an accident on Martin Luther King Jr. Boulevard Monday morning when the truck collided with a passenger car carrying a driver and small child. The truck also sheared off a traffic signal pole at the corner of Martin Luther King Jr. Boulevard and Garland Street.

FAYETTEVILLE — The Fayetteville Fire Department's most expensive fire truck, Ladder-1, is out of commission after it collided with a vehicle and ran over a light pole Monday morning.

The car involved in the wreck was occupied by a driver and a child, according to a statement from the city of Fayetteville. The statement gave scant details of the accident and no identities of those involved.

The child and three firefighters were taken to Washington Regional Medical Center, but were all treated for minor injuries and released, according to the city's statement. There were a total of four firefighters on the city's truck.

The damaged fire truck, which has a 115-foot ladder, will be replaced by a fire truck with a 75-foot ladder that provides aerial water support, Fayetteville Fire Battalion Chief Mauro Campos said.

"It's not going to impede our responses," Campos said.

Campos said the fire truck replacement was not designed to serve as a rescue apparatus. Neither truck has the capability to reach the highest structures in Fayetteville, Campos said.

"Even the tallest ladder in the city couldn't do that," Campos said. "We're still going to be able to provide appropriate fire protection."

Ladder-1 was purchased in 2007 for about $880,000, said Paul Becker, Fayetteville's finance director. Ladder-1 is insured under a policy with the Arkansas Municipal League and has a $1,000 deductible. Damage estimates were unavailable.

The cause of the accident was under police investigation late Monday. In the city's news release, the fire department urged all drivers to remain aware of their surroundings and to yield to emergency vehicles using their warning sirens and lights.