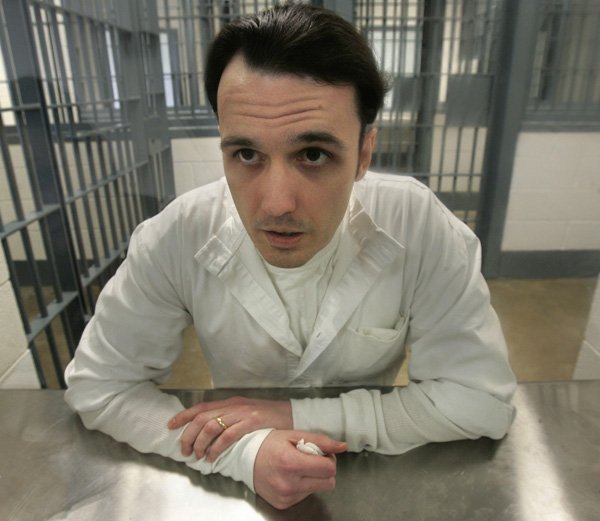 FILE - In this Feb. 18, 2010 file photo, Damien Echols is interviewed in the visiting area of the Arkansas Department of Correction Varner Unit prison in Varner, Ark. The Arkansas Supreme Court on Thursday Nov. 4, 2010 ordered a judge to consider whether newly analyzed DNA evidence might exonerate three men, including Echols, convicted in the 1993 murders of three West Memphis Cub Scouts. The justices also said a lower court must examine claims of misconduct by the jurors who sentenced Echols to death and Jessie Misskelley and Jason Baldwin to life in prison.

The justices also said a lower court must examine claims of misconduct by the jurors who sentenced Damien Echols to death and Jessie Misskelley and Jason Baldwin to life in prison. The eastern Arkansas murder case has drawn the attention of Hollywood celebrities and civil rights activists.

At a hearing in September, lawyers for Echols said Circuit Judge David Burnett should have considered DNA test results in deciding whether to grant him a new trial. In 2008, Burnett rejected Echols' request for a new trial without holding an evidentiary hearing.

"While there is a significant dispute in this case, as to the legal effects of the DNA test results, it is undisputed that the results conclusively excluded Echols, Baldwin and Misskelley as the source of the DNA evidence tested," the court wrote Thursday.

The justices also directed new hearings for Misskelley and Baldwin. The Arkansas Supreme Court has previously affirmed all three convictions.

Prosecutors maintained that the absence of their DNA wasn't enough to prove the three men are innocent and that a jury convicted the men on other evidence.

The court also said defense claims of juror misconduct must be addressed — Misskelley's confession was not introduced at Echols' trial but defense lawyers believe jurors considered it anyway. The state argued any new hearing should address only the DNA.

Echols has been on Arkansas' death row since 1994, when he was 20, after being convicted in the deaths of 8-year-olds Steve Branch, Christopher Byers and Michael Moore. He's maintained his innocence since his arrest and argues that he would be acquitted if retried on the charges.

The state Supreme Court upheld Echols' conviction in 1996, and he filed his most recent appeal after the justices gave him permission to test DNA evidence from the crime scene — where the boys were found beaten, nude and hog-tied. DNA testing was not available at Echols' trial because of technical limitations. Scientific advances have led to several cases being reopened nationwide.

The state argued Echols was merely trying to re-argue a case that he already lost before a jury.

Attorney General Dustin McDaniel's office said it would review the order before commenting.

The men's supporters, who call them the West Memphis Three, said they hoped a new hearing would come soon.

"These young men were convicted of a brutal crime someone else committed, and we hope the state moves quickly to overturn their convictions and seek to prosecute those responsible," said Capi Peck of Arkansas Take Action, a group that has been working to free the three men.

The new hearings will be heard by a different judge because Burnett has been elected to the state Senate and will take office in January. The high court ordered Thursday that the cases be reassigned.