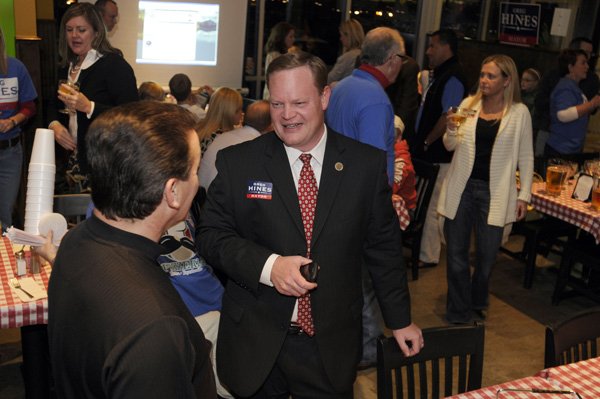 This story has been updated with the latest numbers from the Benton County Election Commission.

ROGERS — Rogers won't know their next mayor until a runoff election can decide that position's fate later this month.

In races involving more than two candidates, a runoff is required if no one candidate tallies 50 percent plus one vote. The runoff is scheduled for Nov. 23.

“I feel good about the early returns. So many volunteers have worked so hard for this night, now they get to see the fruits of their labor. Just being close to 50 percent is great in a five-man race is humbling, very humbling,” Hines said.

Hines was the first candidate to announce he was running for mayor after Steve Womack said he would seek the 3rd District seat in the U.S. House of Representative.

Hines raised more than $40,000 and spent nearly $30,000 on his campaign, nearly doubling that spent by any other candidate in the race, according to pre-election financial reports.

Maddox, who moved back to Rogers from Gravette earlier this year, said he was pleased with early returns.

“I hope we get the opportunity, in a runoff, to let the voters hear more about my mission for Rogers,” Maddox said.

This is not Maddox’s first foray into politics. He served two terms on the Gravette City Council. He also ran unsuccessfully earlier this year for the Republican nomination for the 3rd District seat in the U.S. House of Representatives.

Mills, a former banker, was cautiously optimistic about the early results.

“Our objective was to finish in second place and get into the runoff. I haven’t given up at this early stage. For me, it is all about Rogers,” Mills said.

Steve Mankin had 1,119 or 11 percent of the votes. Mankin, who works for the Rogers Police Department as coordinator of internal affairs, was making his first run for a public office.

Marvin Bair received 280 votes, or 3 percent. A truck driver, Bair mainly campaigned on weekends with his children. Bair spent less that $500 on his campaign, he said.