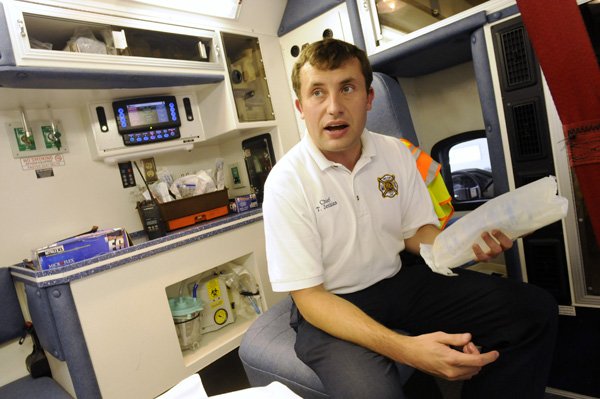 Rogers Fire Chief Tom Jenkins talks May 6 about the new hypothermia protocol being used on cardiac patients in his department’s ambulances at Fire Station No. 1 in Rogers.

Paramedics are using a new protocol for heart attack victims called induced hypothermia during which a patient’s temperature is lowered by the injection of chilled saline solution. The lowered temperature may help minimize neurological damage.

“It just involves a cooler and chilled fluid,” Jenkins said. “It’s the same concept as someone who falls into a frozen pond. The mammalian process kicks in and slows down the body’s metabolism. That’s what we try to mimic.”

Jenkins said the new method gives paramedics the best chance to revive a patient and return him or her to a better quality of life.

The chief is talking about people who, for all intents and purposes, are dead.

“If you look at Tulsa, their revival rate is approximately 30 percent,” Jenkins said. “Seattle’s is approximately 50 percent. That means that for everyone who’s clinically dead, they get back” that percentage of patients.

The ambulance service has only used the protocol once. It will take about a year to evaluate the success of the program, Jenkins said.

“Admittedly, it has limited use,” Jenkins said. “A number of things have to come together in the field within a short period of time. The patient has to be discovered, CPR started right away, defibrillated within a certain time frame, receive (advanced life support care) and an early 911 alert.”

The time frame and limited use of the hypothermia protocol are why Springdale Fire Department officials chose not to adopt the methodology for their ambulance service, said Jimmy Vaughan, division chief.

“Our EMS board evaluated it and it’s not something we’re going to be doing,” Vaughan said. “It’s the trend across the nation. But our response time is only eight minutes and it takes time to bring down the core temperature. We’d rather work on improving our response time.”

Because of the area Rogers paramedics cover, the hypothermic method may be more beneficial to their patients than it would be for Springdale’s, Vaughan said.

“Rogers has a lot more rural responses than we do,” Vaughan said. “It’s an advantage when you have a long time to transport because you have more time to get the temperature down.”

Cost is also a factor. The new equipment needed to adequately embrace the new technology is expensive. It includes a core monitor for body heat to go along with the simple ice chest for cooling saline solution.

“We’ve got new monitors, new ambulances and a new dispatch center,” Jenkins said. “We’ve gotten the hypothermia equipment in the past 60 days, but it’s been over a year in the process. But if we can get just one or two people back, it will have been worth the cost.”

While Springdale has declined to use the new method, Bentonville officials are in the process of evaluating the protocol, said B.J. Hyde, public information officer for the Bentonville Fire Department.

“We’re currently talking with a company (about keeping) the fluid cold,” Hyde said.

Hyde said Bentonville’s ambulance service does not have a timeline for implementation of the treatment.

“But it won’t be long,” Hyde said. “We have one concern that needs to be clarified by the company. If we can get that answered and get a good quote on the equipment, we’ll buy the product and implement the procedure.”

Steve Harrison, assistant chief with Central EMS ambulance service in Washington County, said his group has no plans for the new methodology.

“As I understand it, that’s just in the study phase right now,” Harrison said. “We’re not a part of that study.”

Jenkins said the study will be measured on how often the procedure is used and how many patients are returned to a normal lifestyle.

“We focus solely on the outcome,” Jenkins said. “On fires, that’s easy to do. On (emergency medical service), we want to give our citizens the best chance to survive. We’re not playing catch-up. We’re going from the industry standard to the cutting edge.”