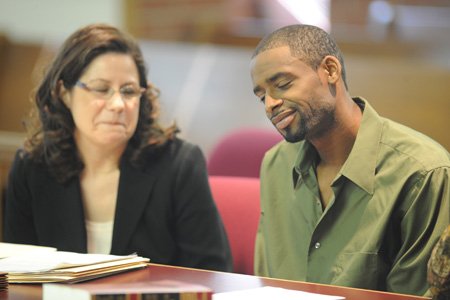 Johnny Ray Balentine, right, of Springdale smiles Tuesday alongside one of his attorneys, Leanna Houston, after being found not guilty of battering a Springdale police officer during an incident last year.

FAYETTEVILLE — Johnny Ray Balentine got hit on the head with a flashlight, zapped with an electric stun gun, handcuffed and hauled off to jail after his mother called Springdale police to their home to quell an argument last year.

Police and prosecutors also charged him with battery of a Springdale police officer. But on Thursday, a Washington County jury took about 30 minutes to determine Balentine not guilty.

Officers arrested Balentine, 28, after he refused leave a bedroom at the apartment he shared with his mother, Pamela. Police said Balentine was the aggressor, tackling officer Christopher Arthur and trying to take away his gun. Arthur said his back was injured and he got a scrape on his wrist in the tussle.

“Refusing to step into another room in your own home with a police officer isn’t a crime,” Chief Deputy Public Defender Leanna Houston told jurors in opening statements. “Acting the fool isn’t a crime.”

The defense argued when Balentine refused Arthur’s request to go outside and talk, he was within his rights because he hadn’t done anything wrong. They maintain Arthur over-reacted to the situation.

“What resonated with me was this fellow was in his own home and he had committed no crime,” said Deputy Public Defender Julie Tolleson.

Arthur testified he was trying to de-escalate an argument between Balentine and his mother when he asked Balentine to come with him to a quieter area and talk. Balentine refused twice, pulled away then charged Arthur. The two men landed on a couch with Balentine on top.

“At that point, I had to do something,” Arthur testified. “I was no longer in control of the situation and I was in fear for my life.”

A second officer, Chad Wilson, zapped Balentine with a stun gun and was cuffing him when Pamela Balentine entered the fray to protect her son by grabbing the stun gun, according to testimony for the defense. She was zapped, cuffed and arrested, too.

“I was just trying to stop him from sticking my baby with that thing,” Pamela Balentine testified Thursday.

Pamela Balentine spent 10 days in jail and paid a $500 fine for interfering with police. A charge of resisting arrest was dropped.

The situation started with Pamela and Johnny Balentine arguing in the early hours of Nov. 28.

“Johnny was saying mean and hurtful things to me and I wanted him to leave,” Pamela Balentine said.

London Balentine, a younger brother of Johnny, told jurors they were playing video games when police arrived. Arthur grabbed Johnny Balentine after Balentine refused to leave the bedroom and the two men fell on the couch, according to London Balentine.

The whole fight lasted from 45 seconds to just more than a minute, according to the testimony of several participants.

Arthur didn’t go to a doctor and didn’t miss any work, according to his testimony. But, he said he still has back pain at times.