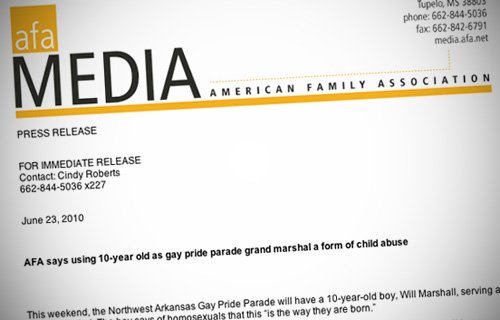 The American Family Association denounced Fayetteville's Pride Parade in a press release yesterday. Mayor Lioneld Jordan and the city council has received hundreds of e-mails from the group's supporters asking the mayor to drop his proclamation.
Email From AFA

I am shocked to learn that the city of Fayetteville is issuing a proclamation in support of the homosexual activist group, Northwest Arkansas Pride.

It's offensive enough to sensibilities that they are going to parade their deviant lifestyle on the streets of the city.

It's even more abhorrent that the city is supporting it, knowing very well that the organizers of this event are exploiting children to push their radical sexualizing event.

I implore you to withdraw the proclamation and focus on issues that promote a healthy and safe lifestyle, rather than one that is risky and dangerous.

FAYETTEVILLE — Strong words from an anti-gay organization are not enough to halt Northwest Arkansas’ gay pride parade, set to roll Saturday in Fayetteville.

The American Family Association — an evangelical Christian advocacy group in Tupelo, Miss., with a nationwide reach and a particularly anti-gay message — has denounced Fayetteville Mayor Lioneld Jordan’s endorsement of the parade and the gay rights message it represents. The group also wanted the parade’s permit canceled, said Don Marr, Fayetteville Chief of Staff.

“We call on Mayor Lioneld Jordan of Fayetteville to cancel his plans to issue a proclamation celebrating homosexual behavior and Gay Pride,” wrote Tim Wildmon, President of the AFA, in a statement. “There is nothing about homosexual conduct to be proud of, and much to be ashamed of.”

The group also took issue with the parade organizers’ decision to have Will Phillips, the 10-year-old West Fork boy to serve as grand marshal. In October Phillips declined to stand for the Pledge of Allegiance in his middle school classroom because he said not everyone in the country is treated equally.

The AFA likened the boy’s role in the parade as a form of child abuse, according to the statement, which misidentified Phillips as Will Marshall.

As of Thursday afternoon, 49 comments were left of a Facebook post by Matthew Petty, a Fayetteville city councilman. Petty wrote that he had received more than 200 e-mails asking the city to withdraw support for the parade.

Supporters of the American Family Association’s views bombarded the mayor’s office with e-mails Wednesday afternoon, officials confirmed. It’s not clear how many — if any — of those complaints are from Fayetteville residents. Jordan reiterated Thursday that his position is unchanged.