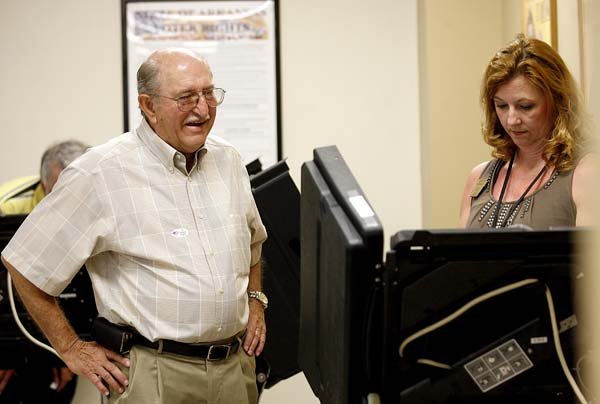 Duane Neal of Bentonville (left) waits while election official Betsy Harrell of Pea Ridge starts the electronic ballot for him on Tuesday, June 1, 2010, inside the Benton County Administration Building in Bentonville. Early voting resumed for run-off elections on Tuesday.

That will not happen.

The commission accepted a bid from Election Systems and Software in February to provide the equipment. Fifty machines, for $91,000, were delivered in March, said Commissioner Bill Williams.

That will likely be the last shipment of electronic voting machines the county will receive this year because of a shortage of machines, said Mark White, regional account manager for Election Systems.

The Quorum Court approved $360,000 for the purchase of the used voting machines in December. The county has 261 electronic voting machines, 211 purchased new for the 2006 elections, Williams said.

Williams said the remaining 150 electronic voting machines were to be purchased later this year. That plan has changed.

“We are probably not going to buy them because ES&S has failed to deliver on their promise to have them, and their service has not been what we had hoped it would be,” Williams said.

Williams said Election Systems has not provided adequate support for problems with the machines the Election Commission has found.

The commission had the batteries replaced in all of the personal election ballots last year. Eight of them now have intermittent failures, Williams said.

The failing batteries have been returned to Election Systems. The company claims there is nothing wrong with the batteries and cannot provide an explanation for the failures, Williams said.

“We are extremely disturbed over the problems with the PEBs we got with the last machines, and we are not happy with ES&S at this point,” said Election Commission Chairman E.J. Miller.

Miller said the Secretary of State selects the voting machines used by the state. The Election Commission is not interested in purchasing machines different from the ones it already has.

“I know we could fill some of it, but I do not know about all of it this year,” White said.

White said there is a minimum of 5,000 machines that must be ordered to justify manufacturing new machines.

“Before we make that type of outlay we need some kind of assurance that our customer base could buy those up in a reasonable time,” White said.

White also said Election Systems is working with the Election Commission to resolve problems with equipment.

Williams said there are other possibilities the Election Commission may examine instead of purchasing the machines. Options include decreasing the number of polling places so more machines would be available in each, using centralized locations and using more paper ballots by purchasing machines that can count paper ballots at each precinct, Williams said.