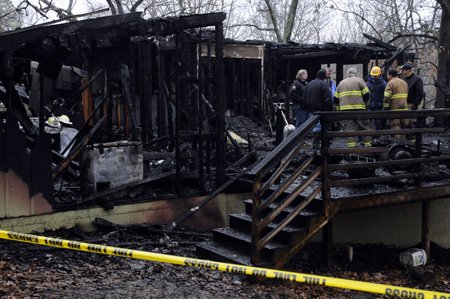 Officials with the Bella Vista Fire Department, Bella Vista Police Department and the Bureau of Alcohol, Tobacco and Firearms in Tulsa, Okla., talk Thursday while working to determine the cause of a fatal, early morning fire that claimed the lives of a family of five at 4 Powick Lane in Bella Vista.

Two adults and three children died apparently trying to escape the blaze, which firefighters are still investigating. A number of neighbors called the Bella Vista Fire Department at 3:57 a.m. to report the blaze at 4 Powick Lane, near the Missouri border.

The bodies of Angie Reed, 29, and her children, Jade Schieffer, 11, Mica Schieffer, 9, and Kyra Schieffer, 4, and Steven Lee, 42, were found throughout the house, said Fire Chief Steve Sims. Authorities said Lee was the children’s stepfather.

“We found two in a bedroom, one in the master bathroom and two in the bathroom in the hallway,” Sims said.

“It looks like they were trying to get out the usual way out, but found it blocked by fire,” Sims said.

Meagan Reynolds, who lives across the street, said her mother saw flames and woke her up about 4:30 a.m.

“I only saw one post (on a back deck) in flames because it was so smoky,” Reynolds said. “We were supposed to have had play dates with their kids, but the kids kept getting sick. They hadn’t lived there over five or six months. (Lee) threw a little party when they first moved in.”

Naomi Daugherty, was best friends with Jade. They went to different schools, but rode the same bus, she said.

She said firefighters asked her to go through the house and tell them where her friends' rooms were.

“We used to watch YouTube together, swing on the swings and play in my clubhouse and with the kitties,” Naomi said.

Naomi’s grandfather Ken Dupuis said Naomi, who appeared composed, had cried most of the morning.

“She’s been working it out.” he said.

“They got it out pretty quick,” Dupuis said. “It could have spread fast. There’s a lot of propane tanks and trees in the area.”

Investigators from Bella Vista’s fire and police departments and the federal Bureau of Alcohol, Tobacco, Firearms and Explosives sifted through ashes Thursday afternoon.

Sims said the federal investigators were called because authorities were unable to reach a local fire marshal.

“In the past we’ve used the ATF and work very well with them,” Sims said. “We also have people trained in cause and origin, but it never hurts to get a pair of outside eyes on the scene.”

Sims said investigators have no reason to suspect foul play and found nothing to indicate the fire was anything but accidental.

“It appears to have started in the living area,” Sims said. “We think it was the living room area because there was a burned TV there. We don’t know the layout of the house.”

“We made arrangements for kids to get counseling and they could call their parents and go home if they wanted to,” Egger said. “A few of them did. They had a lot of questions.”

The school sent a letter home saying plans are being made to provide a way for students to remember their friend.

Sims said the last time there was a fatal fire in Bella Vista was about 20 years ago.

The 1,196-square-foot house was valued at $62,100, according to county records. It is a total loss, officials said. County records show the owner of the property to be Kennedy Properties of Pea Ridge.

Andra Atteberry contributed to this report.