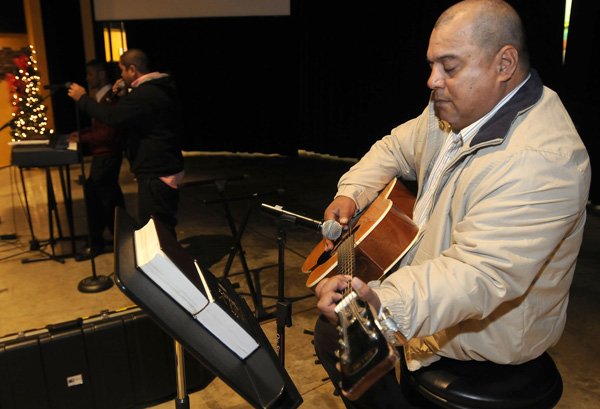 Larry Muller, of Lowell, plays the guitar Dec. 12 at the Cross Church Marshallese service in Springdale. The special service for the group started in May with a home group.

SPRINGDALE — The Marshallese migration to Northwest Arkansas can be traced to one man.

In the late 1970s, John Moody left the island chain in the Pacific to attend college in eastern Oklahoma. Moody found a job in Springdale after graduation, married a local woman and started telling his island relatives about life and opportunities in Arkansas.

That sparked the first wave of Marshallese immigrants in the 1980s, said Carmen Chong Gum, the general consul at the Republic of the Marshall Islands consulate in Springdale.

An estimated 6,000 Marshallese live in Northwest Arkansas, concentrated in Springdale. Gum hopes the 2010 U.S. Census set to be released early next year will provide a better idea of exact numbers. Census estimates in the annual American Community Survey indicate the population of those who identify themselves as Native Hawaiian and other Pacific Islander, which includes Marshallese, grew in Springdale and Bentonville from 2008 to 2009. Springdale is believed to have the largest Marshallese population outside the islands, where 50,000 people live.

Some Marshallese came for educational opportunities, particularly for their children. Others sought work or better health care than what's available in the islands. Massive layoffs by the Marshallese government in 2000 led to a second big wave of immigration. The U.S. and Marshallese governments signed agreements when the islands became independent, allowing Marshallese to immigrate to the United States without visas, green cards or most of the paperwork required of other immigrants. The agreement was considered reparation for U.S. nuclear bomb testing on two Marshallese islands, Bikini and Eniwetok, during the 1940s and '50s.

The Marshallese community tends to be close-knit, and many recent arrivals don't know much about life in the U.S. That's where Albious Latior comes in.

He handles issues ranging from getting children enrolled in school to obtaining a driver's license or finding a job.

"The poultry plants have played a big part in Marshallese jobs," Latior said. "There are always openings, and the local companies have been friendly toward hiring Marshallese workers for many years. It was one of the things that brought many of our people here."

Most Marshallese are churchgoers. Latior keeps mailboxes at the Jones Center for 34 area churches. In the boxes are information, flyers and event notices the churches can distribute to their Marshallese members.

Andy Goode noticed earlier this year that the Marshallese Bible study group at Cross Church, a Baptist congregation in Springdale, was growing quickly, he said. The church started a Sunday service for the community last month, with island-themed music and sermons. The service is in English because the church doesn't have ministers fluent in Marshallese, he said.

That's no longer a problem at the police department, assuming Gomez Zackious is on duty. Zackious is the department's first Marshallese officer and the only street cop fluent in the language. Islanders with legal issues usually count on Zackious or Latior to help get the right information to or from the police.

The Marshallese community is concentrated so heavily in Springdale that Caven Clark didn't know they existed until a summer employee at the Buffalo National River who had taught in the islands suggested bringing some of the Marshallese children out for a canoe trip.

"They were totally under the radar," said Clark, outreach coordinator at the river for the National Parks Service. "I learned that while canoeing is a big part of their culture, pretty much the only part of the terrain that was the same here and there was the water itself."

The event will likely become an annual one, Clark said.

"Part of our mission is to bring people who've never been to the parks system out here," Clark said. "From my perspective, it wasn't just about them, though. It was a door opening in both directions."

Awareness of the Marshallese community is growing throughout the region, beyond the borders of Springdale, Latior said.

"It used to be known only locally, but now it seems like everybody knows the Marshallese are here," he said. "There are still questions from many people, but people know we're a part of the region now."

"Education, jobs and health care will continue to bring more and more Marshallese to Northwest Arkansas," she said.