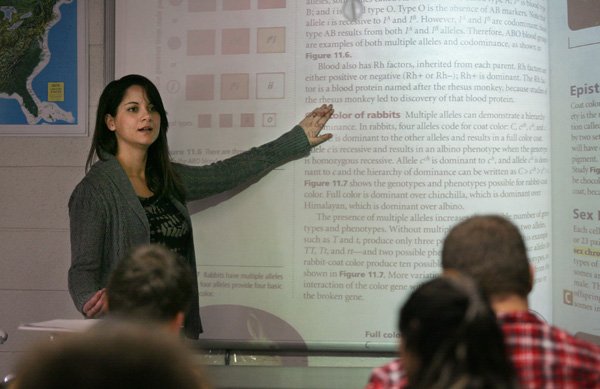 Audrey Duncan teaches biology to sophomores and juniors at Decatur High School. The Decatur School District had nearly an 88 percent remediation rate among seniors last year, a statistic that state education administrators are struggling to improve.

DECATUR — Most Decatur High School seniors graduate without being ready to take college-level courses, joining 5,615 Arkansans who took a college entrance exam and failed to score high enough to avoid remediation in math or reading, according to a 2010 report from the Arkansas Department of Higher Education.

“There’s a myriad of issues,” Decatur School District Superintendent Larry Ben said. “For Decatur, we have a high remediation rate. It’s not an anomaly. That’s kind of the way it’s been here for a long time.”

In 2009, Decatur students planning to attend college who took a college entrance exam had an 87.5 percent remediation rate, according to the most recent state figures. Historically, the school district has had a high rate, Ben said.

The state released numbers that show the Decatur district’s remediation rate is similar to districts in the Delta, where poverty is high and jobs remain scarce.

Students who score low on college placement tests must take high school level courses in college on subjects they should have already learned. The students don’t get college credit for these remedialcourses, which they must pass before they can take collegelevel courses.

Schools nationally continue to struggle to prepare high school students to succeed in college. Among students at two-year community colleges nationwide, 43 percent enrolled in a remedial course in 2004, according to a 2008 survey by Strong American Schools, a nonpartisan educational advocacy group. At four-year colleges or universities, about 29 percent of enrolled students took a remedial course.

In Arkansas, 45.1 percent of students taking college entrance exams needed remediation in fall 2009. Nearlya quarter of students who entered college and needed remedial courses had earned a 3.0 GPA or higher in high school, according to the Higher Education Department report.

It’s difficult to determine how Arkansas students compare to students in surrounding states because there is no standardized way that colleges or states track remediation, said Joseph L. Marks, education services director for the Southern Regional Education Board. Even where schools use the same technique for evaluating students, they often use different cut-off scores for when to say a student shouldbe remediated.

The state Higher Education Department uses four different placement exams to determine remediation rates, spokesman Brandi Hinkle said. Most Arkansas students take the ACT, and those scoring less than a 19 out of a possible 36 need remediation, she said.

Only 37.6 percent of Arkansas students who enrolled in a public, four-year university in 2004 graduated from the same school by 2009, according to the Higher Education Department.

Only about 10 percent of Arkansas students who go to college and need remediation complete a degree, said Julie Johnson Thompson, a spokesman for the state Department of Education.

“The object, at the end of the day, is how does Arkansas end up with more college graduates?” Jones said.

Should remediation remain high and college graduation rates low, the state is likely to produce the fewest jobs in the nation by 2018, Jones said.

“Arkansas is way behind the curve,” Jones said. “The reality is that the economic component, having good jobs, having a state that can afford to provide the public services, pay for Social Security, requires a workforce that has increased levels of skills.”

Arkansas spent $65.7 million on remedial education during the 2007-08 academic term, according to figures in the report. About $24 million of that came from state general revenues, Higher Education Department Director Jim Purcell said.

Higher Education Department figures show 11.7 percent of UA-Fayetteville students and 67.5 percent of the community college students took remedial courses during the fall 2009. Most students needing remediation statewide attend a two-year school, according to the statistics.

“The big contributing factor to not only the remediation rate but to the academic performance of students in Decatur in general is the socio-economic status - poverty is another way of putting it,” Ben said.

Decatur schools sit across the street from Peterson Farms and near a chicken processing plant operated by Simmons Inc. Poultry production is Decatur’s only real industry, Ben said.

About 72 percent of children at Decatur qualified for the free lunch program in 2008, he said.

In the mid-1990s, the state adopted Smart Core, which requires high school students take four upper-level math courses and four English courses in the hope of better preparing them for college. The core has an opt-out option for parents who want to waive these courses for their children.

Decatur school counselor Nancy Cotter tried to talk Logan Jamison, 16, into taking the courses outlined in Smart Core, but Jamison didn’t. He plans to lay bricks for a living instead of going to college, he said.

“Why know when Christopher Columbus sailed the ocean blue when you are laying bricks?” said Jamison, a sophomore.

He earns Ds and Cs in school, despite being smart enough to do better, he said. Some of his friends plan to go to college; others are going to work.

“We’re just a normal group of kids,” Jamison said. “The teachers try to motivate us, but we don’t want to do it.”

This academic term, 14 of the 22 seniors in Decatur opted out of Smart Core classes. That’s a significant number and could highlight the reason the district struggles to ready students for college, said Gary Ritter, who holds the endowed chair for education policy in UA’s department of education reform. During the previous school year, nine of 29 opted out, Cotter said.

“I wish more of our students were more college ready. The biggest challenge is getting [students] to be serious in the ninth and 10th grades,” she said.

Jamison admitted to slacking off at school but said his parents agree that he’s free to make his own choices. He’s wanted to be a mason since seventh grade. He wants to be like his father and grandfather, both of whom were bricklayers.

“They turned out to be very good guys and took care of their families,” Jamison said. “I want to be a man like them.”

Arkansas’s economy is driven by manufacturing and agriculture, which have many jobs that require strong backs but not much education, said Jones of the National Center for Higher Education Management Systems. A decade ago, a worker with a high school education could earn an income to support a family, but those jobs are disappearing, he said.

Smart Core is meant to make sure students are ready for the work force, even if they plan not to attend college, said Thompson of the Education Department. The requirements were phased in so the first class to graduate under Smart Core graduated last May.

Arkansas persists in a culture that does not value higher education, she said.

“In Arkansas, there’s not ahuge value on education and higher education in the state in particular, but I think that’s changing,” Thompson said.

Some schools are pushing harder courses and demanding more from students.

Small schools often struggle with high remediation rates because they can’t afford to have teachers who specialize and cover fewer subjects and fewer grades, said Sandra Stotsky, who holds the endowed chair in teacher quality in UA’s education reform department.

Elsewhere in north Arkansas, the Harrison School District was named among the country’s best performing public school districts this year by Forbes magazine.

Harrison administrators push a strong curriculum, offer tutoring and get support from parents and the community, Superintendent Melinda Moss said. Despite 55 percent of its students qualifying for free lunch, the Harrison district had a 40 percent remediation rate in 2009-10, similar to the much larger Rogers School District. The same year, Rogers had a 35.8 percent remediation rate.

During the past five years, remediation rates have declined in Harrison, as teachers push more difficult concepts on students earlier and focus on teaching material in depth, Moss said.

“[Education] starts in the elementary grades,” she said. “It starts as soon as a kid walks on campus. It’s not something that happens the last two years they are in school.”

Educators and lawmakers continue to argue over why school districts graduate a high number of students who need remedial courses.

“We’re all mystified,” said Tuthill of Northwest Arkansas Community College. “In my generation, the graduating students were coming out ready for college-level English and college-level math.”

Arkansas is not different than the rest of the country when it comes to remedialneeds and failing proficiency in reading, math and English, Stotsky said. And Decatur isn’t the only Northwest Arkansas school district with high remediation rates.

Although some government officials and educators questioned whether teachers are fully prepared to teach the newer, more difficult courses, Beverly Williams, the state human resources and licensure assistant commissioner, said Arkansas teachers are capable. Teacher educational standards are in line with what students are required to know, she said.

In Decatur, the problem lies more with the students than the teachers, students said.

“I know they are trying to help us,” Yang said.