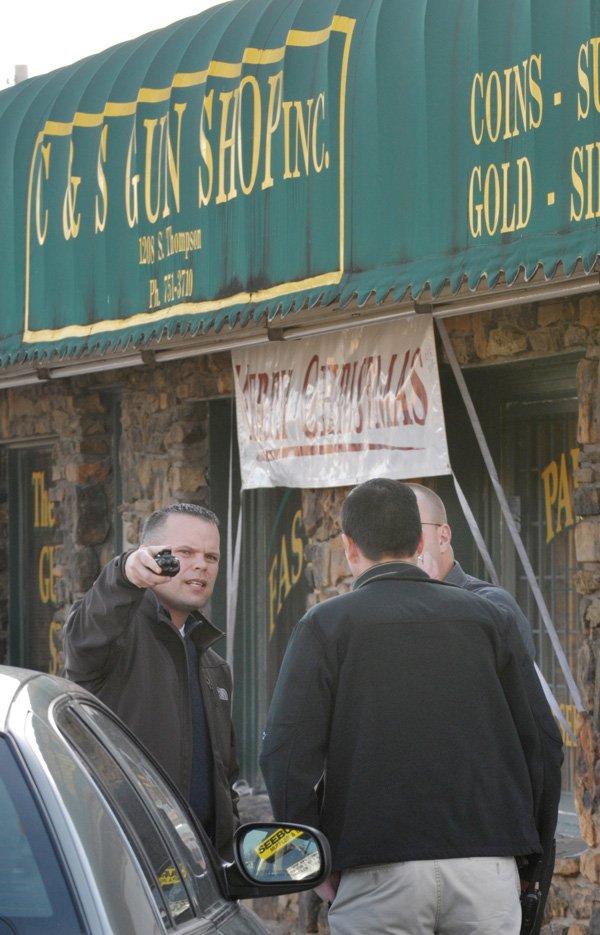 SPRINGDALE — Bullets flew across Thompson Street on Tuesday after employees of a pawn shop thwarted an armed robbery.

“We don’t think anyone was hurt,” said Lt. Kevin Lewis, Springdale Police public information officer. “We are checking with hospitals to see if anyone comes in with a gunshot wound.”

A man tried to rob the gun and pawn shop at 1208 S. Thompson at 2:25 p.m., Lewis said. The man hit the female clerk on the head, either with his fist or a gun. Seeing the attack on a surveillance monitor in the back, employees ran to the front with their handguns, Lewis said.

The clerk was treated but not taken to a hospital, Lewis said.

Clint Cornett is listed on city records as the owner of the gun shop.

Ryan Dalton, a customer at Seeburg Muffler next door, said he thought he hit something while backing his vehicle out when a shot was fired.

“I got out and walked to the passenger side,” Dalton said. “There was two more shots and I heard the bullets going by me.”

Police were not sure how many shots were fired or who fired them, Lewis said.

One bullet hit the market’s window a foot away from the front door. It hit an “open” sign and ricocheted. A clerk was at the cash register about five feet from the bullet hole, said Arthur Perea, a store customer.

“I saw a car driving backwards on the street,” Perea said. “He was spinning his wheels he was driving so fast.”

The getaway car had two bullet holes in the windshield, said Chase Sorrels, an employee of Seeburg.

He was wearing a camouflage mask and a dark hoodie, Lewis said.