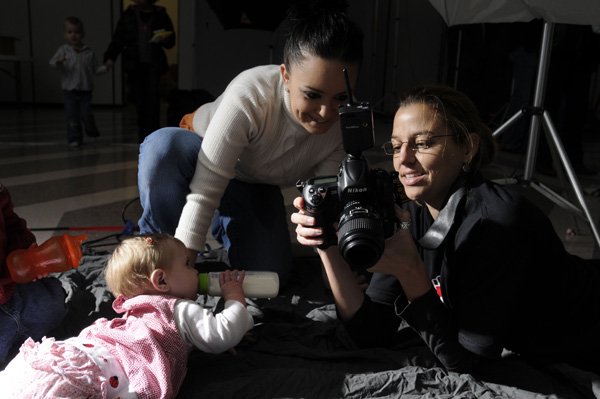 Beth Hall, right, shows Jessica Tweedy a picture of her daughter Madisyn Ware, nine months, at the Help-Portrait Northwest Arkansas Saturday Dec. 4, 2010 at St. Paul's Episcopal Church in Fayetteville. The event brought several photographers together to provide professional portraits to families in need during the holiday season. Each participant received a photo CD with the images from the shoot and a small selection of prints.

FAYETTEVILLE — Before Saturday, Kathy Brands and her family hadn’t had their picture taken in nearly a decade.

“We’ve had a couple problems over the last year or two so it’s been hard to get everyone together,” she said.

The Prairie Grove resident, along with her two grandchildren, Kayliee Spratt, 4, and Cameron Elam, 9, both of Prairie Grove; her great- nephew, Chris Winters, 21, and great-nieces, Karin Winters, 17, and Khandice Winters, 20, of Fayetteville, were among the hundreds of families in Northwest Arkansas who received a free family portrait in time for the holidays Saturday.

The service was provided by nearly 40 photographers across the area, as part of Help Portrait NWA.

The organization branched off from a global movement, which began in 2009 with Nashville-based photographer Jeremy Cowart.

“He came up with the entire idea of giving pictures away during the holiday season,” said Brandon Horner, a local photographer who started the Northwest Arkansas organization. “He and a group of people started a video and put it on YouTube.”

Help-Portrait is a nonprofit organization of photographers and volunteers who use their time, equipment and expertise to give back to those in need, according to its website. Last year, more than 41,000 portraits were given to families by 3,400 photographers and 5,000 volunteers around the globe.

Horner said he learned of the organization through the social networking site, Twitter.

“I have a buddy who lives in Asia and he sent out a tweet about it,” he said. “I watched the video and sent a direct message to a buddy in Rogers. He had already heard about it and wanted to be a part of it too so we started contacting other photographers in Northwest Arkansas.”

On Saturday, more than 100 families had their pictures taken at four locations in Fayetteville, Springdale and Rogers.

Volunteers were on hand to assist with hair and makeup before participants had their portraits made.

Crafts and entertainment were provided while families waited on their photos to be edited and developed.

Afterward, each family received four 4-by-6-inch photos, along with a CD filled with snapshots.

“We had an overwhelming response this year and the year before,” said Horner’s wife, Becca Horner. “It’s a great feeling to give back to people who wouldn’t otherwise have the ability to have their pictures taken with their family. In some cases, the only picture they have is a mugshot.”

In addition to providing free photos, volunteers from the Cobblestone Project were on hand to help meet families’ other needs.

The Cobblestone Project is an organization that provides a sustainable long-term support structure for those in need, according to its website. Volunteers help connect needy families with specific resources in Northwest Arkansas, while providing various free services to help fill gaps in advocacy, such as haircuts, laundry service and food drives.

Becca Horner, who served as outreach coordinator for this year’s event, said amateur and professional photographers donated their time and equipment, while area businesses, such as Collier’s Drug Store, donated pictures and printing material.

Locations in Northwest Arkansas that took part in Saturday’s event included the Boys & Girls Club and St. Paul’s Episcopal Church in Fayetteville, First United Methodist Church in Springdale and The Center for Nonprofits in Rogers. Horner said at least 35 families showed up at each location.

“We’re meeting an emotional need,” she said. “These people have dignity and deserve respect, as well as the ability to have something that’s sentimental to them. When some people get their pictures back, they start to cry because it’s the first picture they’ve ever had together.”

Fayetteville resident Jessica Bingler and her three children, Robert Archer, 14, Jacob Archer, 12 and Hunter Archer, 11, were among the families who had their first photo taken together at the Boys & Girls Club in Fayetteville.

“This is awesome,” Bingler said. “My mom has been really sick lately so we’re giving her a family picture for Christmas. It’s going to mean a lot to her.”