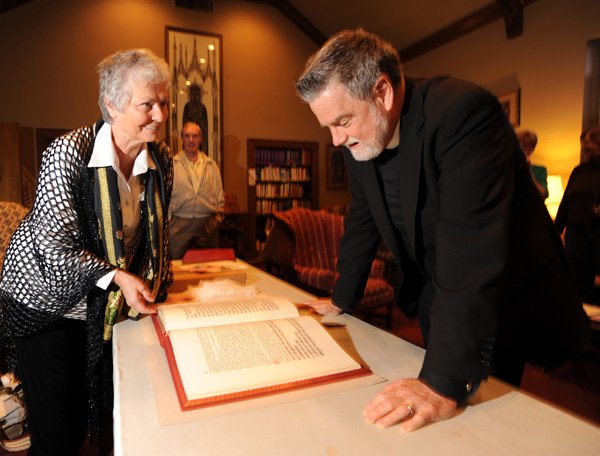 Jungian analyst Virginia Krauft, left, shows her copy of Carl Jung’s “Red Book” to the Rev. Lowell Grisham, rector of St. Paul’s Episcopal Church in Fayetteville. The Northwest Arkansas Friends of Jung group has donated copies of the seminal work to the Fayetteville Public Library and the library at St. Paul’s, where the group has been meeting for 23 years.

FAYETTEVILLE — Value your inner life.” This is the core message of C.G. Jung’s “Red Book,” according to the historian who translated it. Unavailable to the public for nearly eight decades, the record of the famous psychiatrist’s journey into his unconscious mind was published last year.

The Northwest Arkansas Friends of Jung group recently presented copies to the Fayetteville Public Library and the library of St. Paul’s Episcopal Church, where the group has met for 23 years.

There also is a copy available in the John Locke Memorial Library at the Center for Psychology in Rogers. With a list price of $195, the book is out of reach for many readers.

Its publication has been greeted eagerly by Jungian analysts, scholars and followers worldwide. “Red Book,” or “Liber Novus” (Latin for New Book), as Jung titled it, is different than all the rest of his writings. It’s an intensely personal journey into the depths of his soul, a journey that formed the foundation for his theory of analytical psychology.

Jung is well known for his pioneering efforts in the field of psychoanalysis. His concepts of the collective unconscious, archetypes and the anima/ animus (male/female within each psyche) have influenced both psychology and popular culture. The Myers-Briggs Type Indicator, a personality test based on his work, is widely used.

His ideas have influenced quantum physics, the formation of Alcoholics Anonymous and the New Age movement.

They’ve been used extensively in popular literature, art and film,such as the blockbuster “Star Wars” series.

What is less well known, and has only been speculated about until the publication of the “Red Book,” is the descent into possible madness that led Jung to crystallize his ideas. He called that period the most important time of his life, the “numinous beginning” from which all the rest of his work would spring.

A Journey Into The Soul

A crisis that began for him in 1913 precipitated the project.

The eminent Swiss psychiatrist, once a close colleague of Sigmund Freud, had broken away from his mentor.

Freud thought sex was the motivating factor in the human psyche, explained Jungian analyst Virginia Krauft, owner of The Center for Psychology and president of the Friends of Jung group. Jung thought the search for meaning was more important - meaning conferred from a higher source.

The 38-year-old was disillusioned with the scientific rationalism that defined the culture of his day, biographers agree. He’d achieved the success society told him was important, yet his soul hungered for more. Waking visions of mass destruction tormented him. Those inexplicable visions turned out to have a basis in reality when World War I broke out.

Jung began inducing hallucinations in a process he dubbed active imagination. The intention was to get to the core of his unconscious mind. With the help of an inner guide named Philemon and a female figure he identified as his soul, Jungplumbed the depths of his mind. He journeyed through a mythical landscape, welcoming both the horrors and the transcendence he encountered there.

At times he questioned his own sanity, wondering if he was “menaced by a psychosis” or “doing a schizophrenia,” according to an in-depth article about the “Red Book” in The New York Times.

The scientist documented every step of his journey in a series of small black journals. Later, he analyzed his waking dreams and recorded them in a big, red, leather-bound book. The result is “Liber Novus,” long called the “Red Book.”

In 1959, nearly 30 years after he’d worked on the book, Jung added an epilogue. “To the superficial observer, it will appear like madness,” he wrote about his journey. Yet his belief in the benefi t of his inner exploration permeated all of his work.

Jung died in 1961, leaving no clear instructions as to the book’s fate. His heirs denied scholars access, protective of Jung’s reputation and the personal nature of the book.

In 1999, London historian Sonu Shamdasani obtained permission to prepare the book for publication. He spent five years on the project, translating it into English and adding lengthy footnotes and commentary.

The oversized book looks like a sacred manuscript from the Middle Ages, with illuminated letters and full-color illustrations accompanying the script.

The rich colors and crawling calligraphy lift from the page. It’s diff cult to imagine anyone looking through the book without saying, “Wow.” Something living seems to emanate from its pages - the power, perhaps, of the collective unconscious Jung set out to mine.

Full-page drawings record the waking dreamscape he traveled. There’s a barefoot giant with a double-headed battle ax, a snake coiled over a sleeping city, a richlytextured tree of life.

In some of the pictures, the colors run wild, a rich melange of primal energy. Other drawings are more controlled. There is open space around the abstract symbols. Some are mandalas - circular drawings with spiritual significance. The detail in all these drawings is immense, reminiscent of William Blake’s “world in a grain of sand.”

Jung, a student of worldphilosophy and mythology, used elements of many world religions in his art. There is the crucifi ed Christ, the Hindu kundalini and the Kabbalistic Tree of Life. All are metaphors for the inner process of rebirth, Krauft said.

Jung cautioned followers to find their own way through that process.

“The ‘Red Book’ is Jung’s personal writings, his own process of individuation,” Krauft said. “He tells others, ‘Don’t do what I do.’ Each of us has to find our own individual way.

“The process of individuation - becoming who we were meant to be, not who our parents or society tell us to be - that’s all within our grasp to discover. We have to go inside to discover that.”

An Invitation To Explore

Yet the “Red Book” serves as an inspiration, group members agreed.

“It’s an object of encouragement,” said Mary Miller, a longtime member of the Friends of Jung. “A lot of usstruggle with things inside that we never show or talk about with anybody. To sit and read his process - although sometimes it’s hard to understand - (gives us a model to follow).

“If we really were true, from our gut, and let that energize us, (there’s no telling what we’d discover). Between the pictures and the writing, the book is such a rich illustration of the inner work.”

The group has been studying the book biweekly since September, and is all of four pages in.

Studying the book has prompted her to pull out some of her old writings and look at them with fresh eyes, Krauft said. All too often, journalers jot things down and put them away, rather than taking the timeto honor the inner process on the page.

Group member Sharon Donnelly said the book has inspired her to journal in a new way. She’s incorporated color, drawings and illuminated letters with her words.

“Something about the process of doing that, having it on the paper, brought a sense of peace, a sense that what I was doing was beyond the ordinary,” she said. “The beauty of the calligraphy and the drawings, even without the text, got me to think outside the lines of what a journal can be. It’s a real inspiration to me.”

The last page, penned in everyday writing and blue ink, is dated 1959. Perhaps it’s no accident that the epilogue is left unfinished, or that the very last word, carried over to a page of its own, without any concluding punctuation, is “possibility.”

From C.G. Jung’s introduction to his ‘Red Book’

“Believe me: It is no teaching and no instruction that I give you. On what basis should I presume to teach you? I give you news of the way of this man, but not of your own way. My path is not your path, therefore I cannot teach you. The way is within us, but not in Gods, nor in teachings, nor in laws. Within us is the way, the truth and the life.”