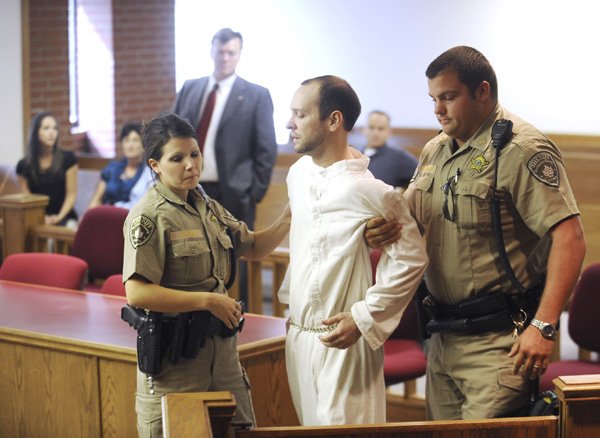 Zachariah Marcyniuk, center, is removed from the courtroom Friday by Washington County Sheriff’s Office deputies prior to the beginning of a hearing in the Washington County Courthouse. Marcyniuk began speaking to the family of Katie Wood, whom he was convicted of murdering.

FAYETTEVILLE — Convicted murderer Zachariah Scott Marcyniuk got an appointed attorney for his post-conviction appeal Friday, but not before deputies dragged him out of the courtroom as he tried to speak with his victim’s father and mother.

Marcyniuk, 31, was sentenced to die by lethal injection for the murder of Katie Wood. Marcyniuk attacked Wood, beating and stabbing her to death in 2007.

“I didn’t kill her on purpose. I know you know that,” a seated and shackled Marcyniuk turned and told Wood’s parents, who were in the courtroom waiting for the hearing to begin. “I never got a chance to tell you that in person.”

Two Washington County Sheriff’s Office deputies grabbed Marcyniuk, who was wearing prison whites, and quickly escorted him out of the courtroom to a holding cell. Wood’s parents, who had driven from Greenbriar, left the courtroom and listened to the hearing from another location.

Marcyniuk was in Washington County Circuit Court for a mandatory hearing to explain his rights and make sure he has an attorney.

As Circuit Judge William Storey tried to explain the reason for the hearing, Marcyniuk argued he needed an attorney first.

“I don’t think I should be in here until I have an attorney to tell me what’s going on,” Marcyniuk told Storey.

Storey patiently explained he was going to appoint Marcyniuk an attorney if he did not have one. Storey asked if he had an attorney or assets to hire one.

“I’ve been in a room for the last year and a half. I’ve been in a concrete room 23-hours-a-day,” Marcyniuk said. “I have no assets whatsoever.”

Storey then appointed the Arkansas Public Defender’s Commission to represent Marcyniuk during his appeal.

“How many people have you sentenced to death?” Marcyniuk asked Storey. “I’m just curious, more than 10?”

As Marcyniuk began explaining again he didn’t kill Wood with premeditation or deliberation, Storey adjourned the hearing and Marcyniuk was again taken out of the courtroom to be returned to death row at the Arkansas Department of Correction.

Wood was a 24-year-old University of Arkansas student. She and Marcyniuk dated for a time and she wanted to move on.

Marcyniuk broke into Wood’s Fayetteville apartment in the early hours of March 9, 2007, and laid in wait for her to come home. Wood was attacked when she opened her front door. The key was broken off in the lock, her purse and one of her shoes were outside when police arrived.

Marcyniuk dragged Wood inside her apartment and killed her. Then he dragged Wood’s body to the bathtub and fled.

Wood had more than 40 wounds on her arms, head and body from the attack and bled to death. Stab wounds in her abdomen were from 4 to 7 inches deep, after cutting through her thick coat. Her aorta was sliced in two.

Before he left, Marcyniuk pulled the shower curtain closed, locked all the doors, took the knife and crawled back out the window before police arrived minutes later. He fled the state after dropping off his dog at his parents house near Winslow. He was in western Oklahoma when a trooper stopped him for speeding and discovered Marcyniuk was wanted for murder.

Marcyniuk’s December 2008 capital murder conviction and resulting death sentence was upheld by the Arkansas Supreme Court in May. Judges said there was ample evidence for a jury to believe Marcyniuk acted deliberately and with premeditation.

The high court earlier this month refused Marcyniuk’s request for a rehearing on that finding. A mandate was then issued. After a mandate has been issued, a convicted murderer can begin challenging the way his attorneys handled his case.

After state appeals are exhausted, there are appeals to the federal courts. In the federal appeals process, claims must be based on constitutional issues or violations.

The appeals process in Arkansas has averaged more than a decade, according to prison officials.

An argument that a defendant’s lawyer was ineffective in representing his client. This round of appeals is first handled at the circuit court level and can then be appealed to the Arkansas Supreme Court.