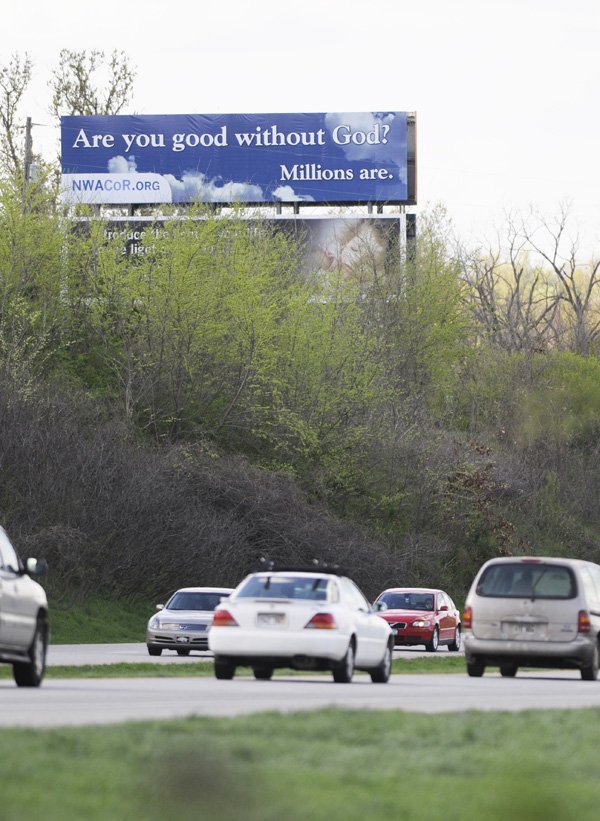 A billboard reading “Are you good without God? Millions are.” is visible from Interstate 540 in Springdale on Wednesday.

SPRINGDALE — “Are you good without God?”

That’s the question posed to passing motorists driving north on Interstate 540 near Springdale, plastered across one of the endless billboards lining the highway.

The billboard assures readers: “Millions are.”

The advertisement, which directs readers to a Web site for the Northwest Arkansas Coalition of Reason, was erected this week as part of an $8,000 outreach campaign organized by the coalition’s national director, Fred Edwords.

Edwords, who works from the national coalition’s Washington, D.C., office, said the goal of the billboard, as well as a series of advertisements that will soon appear on four Ozark Regional Transit buses, was to reach out to individuals who may feel ostracized by the surrounding religious community.

“We do this because we want to raise the public profile of free thought, atheism and humanism in America,” Edwords said. “We thought it’s time to be part of the discussion, and that we deserve a place at the table, too.”

Randall Fleck, the local Coalition of Reason coordinator and a founder of the Northwest Arkansas Free Thought Society, said he hoped the advertisements would serve as a beacon to nonreligious people in the area seeking community.

“Nonbelievers find themselves isolated,” Fleck said. “We’re trying to reach out to them, and say that you don’t have to be alone. You can have the fellowship a church offers without having to have the dogma that comes with it.”

Ozark Regional Transit executive director Philip Pumphrey said he consulted Washington County attorney George Butler after the coalition contacted him regarding advertising on local public buses. Pumphrey said he was advised refusing the advertisement would likely result in a First Amendment lawsuit, which the county would likely lose.

“As a public governmental agency, we do not endorse any advertising on the buses. We’re content neutral,” Pumphrey said.

Pumphrey said he personally found the approach of the advertising unusual.

“They’re looking to generate controversy, which I find slightly amusing,” Pumphrey said. “If you don’t believe in anything, who cares?”

Reactions from area religious leaders were mixed, with most expressing sympathy as opposed to offense at the billboard’s message.

Steve Abbott, pastor of the First Baptist Church in Siloam Springs, said Wednesday he hadn’t yet seen the billboard, but wasn’t particularly bothered by its message.

Abbott said the coalition’s message didn’t offend him personally, and he found freedom of speech outweighed any need he felt for agreement from others.

Rabbi Jacob Adler, who leads the Temple Shalom in Fayetteville, said he took no issue with the coalition’s questioning of religion.

“Can one be good without God? I think it’s perfectly possible,” Adler said. “There’s a big debate within Judaism as to whether someone can act in a moral way without being aware of God.”

Adler said he could personally identify with the sentiment of the coalition’s outreach.

“I’ve been through periods of really serious doubt about God,” Adler said. “I guess that’s why I don’t feel alarmed by it. It’s a perfectly normal human attribute.”