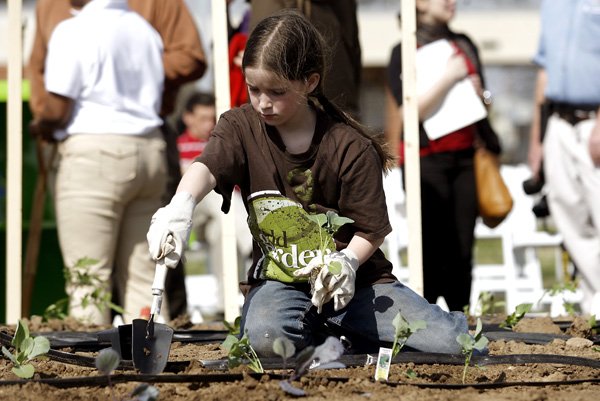 IN THE SWEET SUNSHINE - Peyton Boosey, 10, of Fayetteville plants sweet peppers Thursday in a community garden at the corner of 28th Street and Walton Boulevard in Bentonville. The garden is one of 50 that will be planted across the country.

BENTONVILLE — Abby Boosey, 6, of Fayetteville was all business Thursday.

Boosey held a small cabbage plant in her left hand and carefully balanced it upright while she worked with her right hand to break up clumps of dirt she was placing around the plant’s roots.

Abby and Madison, along with their parents and about 30 other people, were busy planting a community garden near the corner of 28th Street and Walton Boulevard in Bentonville.

The 20-foot by 20-foot garden was planted with peppers, cabbage, tomatoes, basil, onions and other vegetables by volunteers as way to encourage people across the country to get outside and grow something.

Taja Sevelle, the founder and executive director of Urban Farming, said the small Bentonville community garden is just one of 50 that will be planted around the country this spring to show communities the importance of gardening.

Urban Farming is a company Sevelle started in Detroit with three small gardens in 2005. The company now has more than 800 gardens around the world.

The larger goal of the community gardens is to work to eliminate hunger, Sevelle said, noting the goal is more achievable than some might first believe.

More than 20 million community gardens were planted in the United States during World War II. The small gardens were referred to as Victory Gardens at the time. The gardens provided 40 percent of the nation’s produce during that time, Sevelle said.

Those gardens “galvanized 20 million people together within a two year span without the Internet, without Twitter and without all of the things that technology that bring people together like we have today,” Sevelle said.

Rick and Cindy Boosey of Fayetteville are the owners of the World Garden restaurant in Bentonville.

The couple helped establish the small garden now located outside the restaurant.

Produce harvested from the garden will be used to help provide local shelters and food pantries with fresh produce, Boosey said.

“We are just excited and we hope this garden will inspire others to do the same thing,” Rick Boosey said. “This is a community loving on a community.”

Gary Davis of Rogers works with Boosey at World Garden. Davis also is a master gardener and will oversee the community garden at the restaurant for the next several months.

Davis said a garden of its size can easily provide enough food to support between four and five families on a full time basis.

Jim Durham of Bentonville said projects such as the community garden are “feeding the children and feeding the world. What could be better than that?”